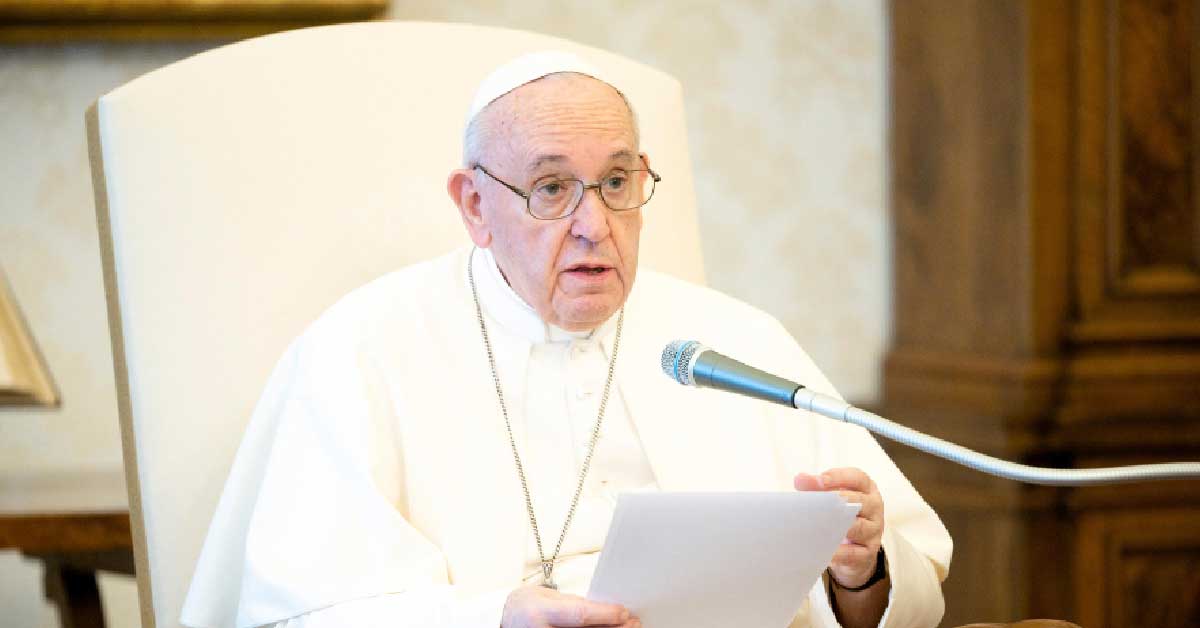 Pope Francis speaks during his weekly general audience in the library of the Apostolic Palace at the Vatican.  (CNS photo/Vatican Media)

By Cindy Wooden – In the story of the patriarch Abraham – honoured by Jews, Christians and Muslims – faith becomes a direct relationship with God that is marked by constant prayer, which sometimes takes the form of “debating” with God, Pope Francis said.

While most ancient people saw the gods as inapproachable cosmic forces needing to be appeased, “the God of Abraham becomes ‘my God,’ the God of my personal story, who guides my steps, who does not abandon me, the God of my days, the companion in my adventures,” Pope Francis said.

“I ask myself, and I ask you, do we have this experience of God?” the pope said, during his livestreamed general audience from the library of the Apostolic Palace. Because of the COVID-19 pandemic, visitors and pilgrims still are not present for the audiences.

In his main talk, part of a series about prayer, the pope said that with Abraham, “the life of a believer begins to be understood as a vocation, that is, as a call.”

Abraham had heard God calling him to leave his homeland for a land that God would show him, promising to make of him and his descendants a great nation, although he already was old and childless.

Abraham was not weighed down by uncertainty despite the “enigma,” the pope said. Instead, he “believed in the promise of God. He believed and set off without knowing where he was going.”

The account of Abraham’s life in the Book of Genesis mentions how, along his journey, he built altars to the Lord.

Through his prayer, the pope said, “Abraham became familiar with God, even capable of arguing with him, but always faithful. He spoke to God and he argued.”

And when God asked him to sacrifice his son Isaac, Abraham continued to trust in the Lord, “living his faith as an ordeal, like walking while groping in the dark, under a sky deprived of stars this time, but with faith,” the pope said. Then “God himself stops the hand of Abraham, which was ready to strike, because he saw that his willingness was truly total.”

“We, too, often feel like we are walking in the dark, but with faith,” the pope said. That is why people must pray, like Abraham, and sometimes question God like he did.

Getting angry with God can be a form of prayer, he said, “because only a son or daughter can get angry with his or her father and then come together again.”

“Let’s learn from Abraham to pray with faith, to dialogue, to argue, but always being ready to welcome the word of God and put it into practice,” Pope Francis said. “Let’s learn to speak to God like a son or daughter does with a father: listen to him, respond, discuss, but transparently, like a child with his or her father.”