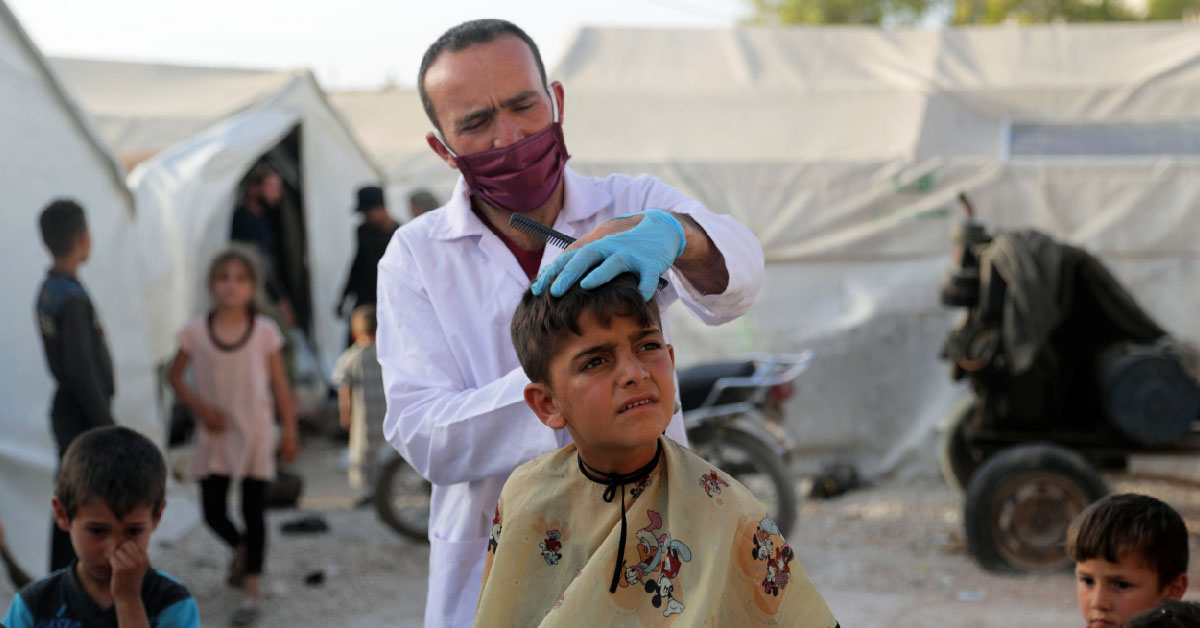 A volunteer hair stylist from the International Association for Relief and Development cuts the hair of a displaced boy at a camp in Idlib, Syria, May 19, 2020, during the Covid-19 pandemic. During his June 28 Angelus at the Vatican, Pope Francis asked people to remember the ongoing crises in Syria and Yemen, and he offered prayers to the thousands of people in western Ukraine suffering the effects of flooding. (CNS photo/Khalil Ashawi, Reuters)

By Cindy Wooden – With the coronavirus pandemic continuing, Pope Francis asked people to also remember the ongoing crises in Syria and Yemen, and he offered prayers to the thousands of people in western Ukraine suffering the effects of violent flooding.

After reciting the Angelus prayer June 28 with visitors in St. Peter’s Square, the pope noted that June 30, the European Union and the United Nations were to hold their fourth conference on “supporting the future of Syria and the region.”

Because of the pandemic, the conference was to be held virtually. A statement from the EU said that “with the conflict entering its 10th year, the situation in Syria and the region remains highly critical: the dire humanitarian situation, with millions of Syrians internally displaced and having sought refuge in Syria’s neighbouring countries, is now being further compounded by the consequences of COVID-19 pandemic.”

Pope Francis asked Catholics to “pray for this important meeting, so that it may improve the dramatic situation of the Syrian people and neighbouring peoples, particularly Lebanon, in the context of serious sociopolitical and economic crises that have been made even more difficult by the pandemic.”

“Think of the fact that there are small children who are hungry, who do not have anything to eat,” the pope said. “Please, may the leaders be capable of making peace.”

The other dire situation in the region is Yemen, which has been locked in civil strife for five years. The U.N. defines the situation in the country as “the world’s worst humanitarian crisis,” with some 80 percent of the population relying on humanitarian aid — which is slowing because of the pandemic — and millions of children suffering malnutrition and the threat of starvation.

Pope Francis asked “everyone to pray for the population of Yemen, especially the children, who are suffering as a result of the very serious humanitarian crisis.”

He also asked people to pray “for those affected by the severe floods in western Ukraine; may they experience the comfort of the Lord and the help of their brothers and sisters.”

Heavy rainfall June 22-23 led to extensive flooding; three people died, hundreds were left homeless, roads and bridges were washed out and farmers’ crops were swept away.