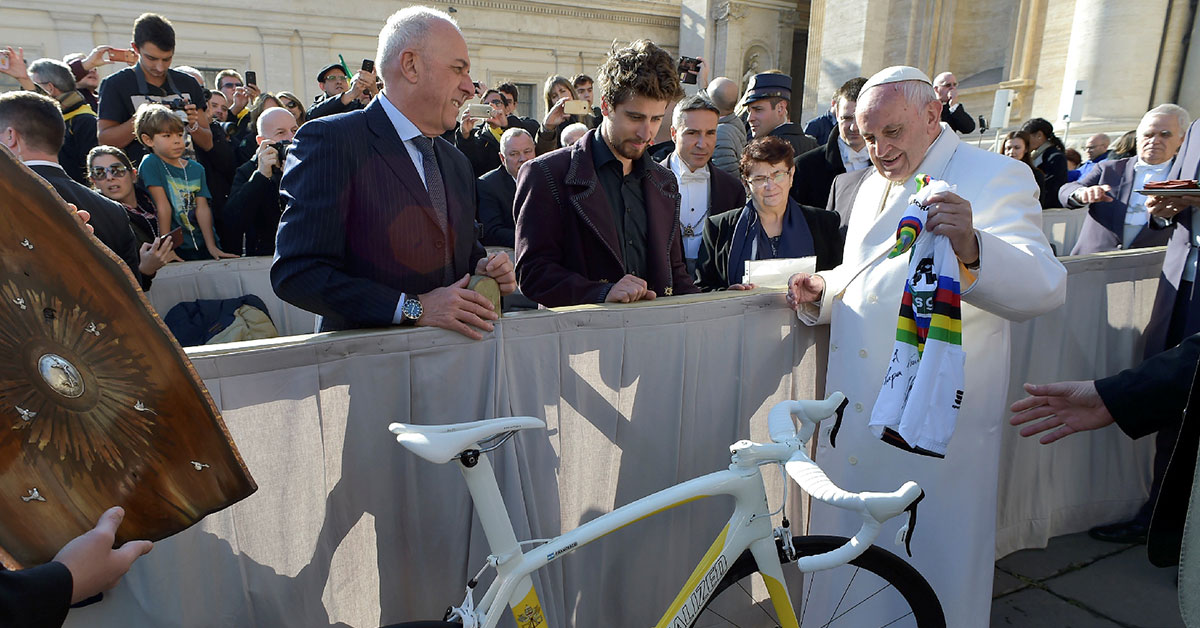 Pope Francis receives the UCI Road World Champion jersey and a bicycle painted in the colours of the Vatican flag from cycling world champion Peter Sagan of Slovakia in this file photo. (CNS photo/L’Osservatore Romano)

By Carol Glatz – Sports fans and collectors will have an opportunity to bid on unique items and memorabilia as part of an online charity auction to benefit health care workers in northern Italy.

Pope Francis has donated some of the items to be auctioned off on CharityStars.com, including a custom-made bicycle he received from three-time world road-race champion, cyclist Peter Sagan.

Those who take part in the auction or make a donation will be entered into a raffle for a number of “special prizes,” including a Vatican sports’ club jersey signed by Pope Francis.

The initiative, called “We Run Together” runs from June 8 to Aug. 8 and is sponsored by: Vatican Athletic, the Vatican’s sports association; the Pontifical Council for Culture’s Courtyard of the Gentiles; Fiamme Gialle, the sports club of the Italian finance police; and Fidal-Lazio, an Italian track and field federation.

New items or “experiences” will be put up each week for 10 days of bidding on the “We Run Together” foundation page on CharityStars.com. Some “experiences” being auctioned include: a private visit for two people to the Luna Rossa racing yacht, docked in Cagliari, Sardinia, along with a jersey signed by the crew members; and dinner with two Italian fencing champions, a married couple, Valerio Aspromonte and Carolina Erba.

Auction items will include a Roma soccer jersey signed by retired captain Francesco Totti and items donated by other Italian and European champions, Olympians and Paraolympians, as well as carmakers Ferrari and Lamborghini.

The money raised will go to nurses, hospital workers and medical personnel at the Pope John XXIII hospital in Bergamo and a hospital in Brescia; the two facilities had been overwhelmed during the Covid-19 pandemic.

The pope endorsed the initiative during a meeting with organisers and athletes May 20 in the Apostolic Palace saying, “It is an initiative to help and thank the doctors, nurses and hospital staff. They are heroes! They are all living their profession as a vocation, heroically, risking their own lives to save others.”