Cardinal: Parishes Are Not ‘Businesses’ That Can Be Led By Anyone 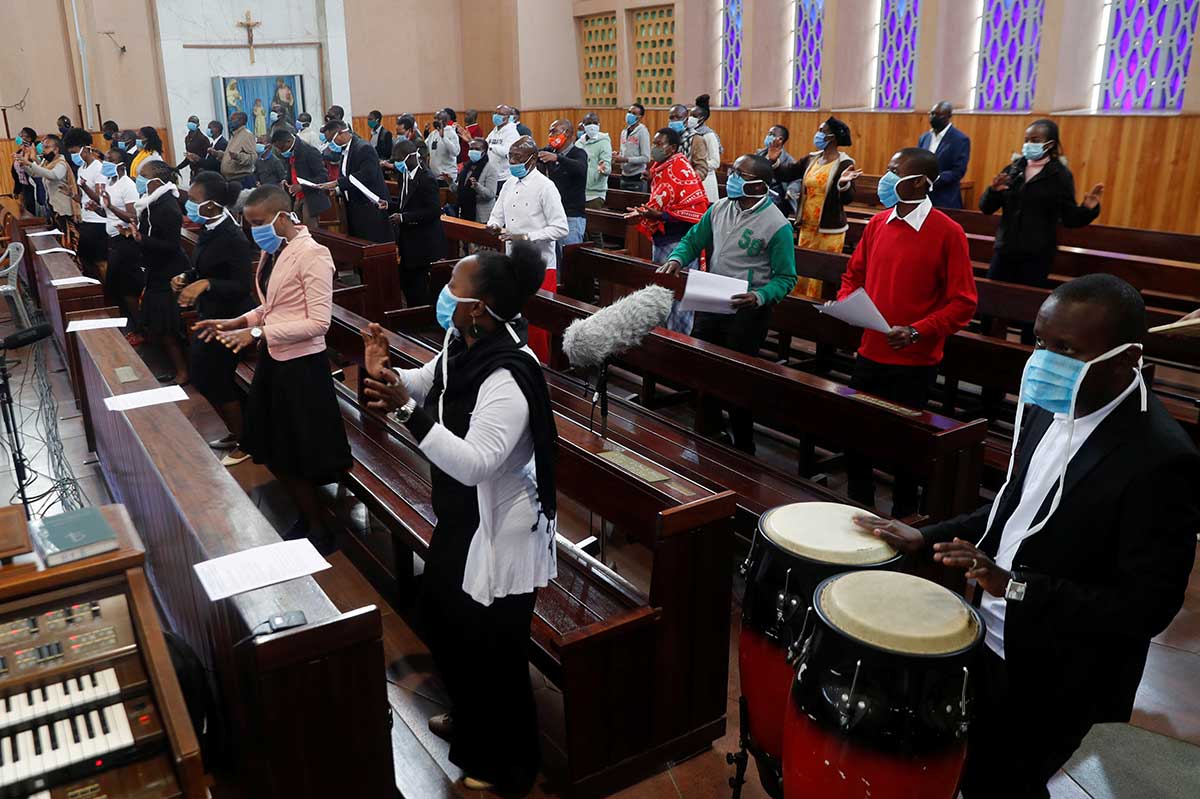 People wearing face masks attend a July 19, 2020, Mass at the Cathedral Basilica of the Holy Family in Nairobi, Kenya, on the first day the government allowed churches to reopen for worship during the coronavirus pandemic. A Vatican document underlines how parishes are not “businesses” that can be led by anyone, according to Cardinal Beniamino Stella, prefect of the Congregation for Clergy. (CNS photo/Thomas Mukoya, Reuters)

By Carol Glatz – The recent Vatican instruction on pastoral care clarifies the responsibility of every member of the church community to work together in the shared mission of evangelisation and warns against turning the parish into a mere provider of services, said Cardinal Beniamino Stella.

The document included “a warning signal” against notions of the parish “as a ‘business’ that provides different kinds of services – sacramental, social, charitable – and not as a missionary community, a family,” in which everyone contributes his and her part according to their vocation, availability and abilities, said the cardinal, who is prefect of the Congregation for Clergy, which released the document July 20.

“Seen in this light, the priest would have to be assisted precisely in not getting lost in administration and bureaucracy, but rather to be focused on the priorities of his ministry – the Eucharist, proclamation of the Word, spiritual direction, confession, the promotion of charity, being close to the faithful, especially those most in need – and be accompanied with the assistance of and encouraged by the example of other members of the community,” he said.

The cardinal made his comments in an interview with Vatican Insider July 28. It came after a number of news articles and criticisms claimed that the congregation’s 22-page instruction somehow gave new and unprecedented powers to the laity or that its insistence a parish must be led by a priest was unsustainable or outdated.

The document, titled “The pastoral conversion of the parish community in the service of the evangelising mission of the church,” did not introduce new legislation on pastoral care, but rather it was a guide detailing the role of lay men and women in the church’s mission of evangelisation and offered guidance in parish reforms and restructuring. It also clarified the role of deacons, consecrated men and women, as well as the laity, in dioceses where there is a shortage or lack of priests.

Every Catholic needs to feel they have an active role and responsibility in the church’s mission, Cardinal Stella said.

However, there are some who are engaged in what he called a “‘vocation’ of the spectator,” fostering controversy and criticism regarding other people’s efforts.

This kind of “vocation,” he said, “does not come from God and does not contribute to evangelisation.”

The parish is meant to be a place to encounter the Lord, of welcoming and of experiencing faith lived in everyday life and as a community, he said.

The “subdivision” of many different duties and ministries within the church community is seen as part of the whole church’s call to mission and to evangelise “so that the parish is not working only for its own ‘survival,’ perhaps pining for ‘the good old days,’ but that (the parish) be enlivened in each member,” who proclaims and bears witness to Christ, especially to those who have become distant from the church or have never encountered Christ before, he said.

One point of debate in the media was on the responsibility of the priest in parish leadership.

The instruction reiterates that bishops must not designate deacons, consecrated and lay men and women who are given responsibilities in a priestless parish as “pastor, co-pastor, chaplain, moderator, coordinator, parish manager,” which are typically reserved for priests “as they have a direct correlation to the ministerial profile of priests.” Instead, those with responsibilities should be designated as “deacon cooperator, coordinator, pastoral cooperator or pastoral associate or assistant,” it said.

When asked about this unique role of the priest, Cardinal Stella said it is important to underline the “specificity of the parish priest as a ‘shepherd’ of that community, reaffirming the centrality of the Eucharist as the source and summit of the life and mission of the church.”

A priest is called to “make Christ sacramentally present, in a special way in the Eucharist and in the sacrament of reconciliation,” he said.

The priest lives out his “spiritual paternity” in the pastoral care of the people, in the “total giving of himself as a father to the church and his community,” he added.

“This doesn’t mean that the parish priest has to do everything by himself, without listening to others or without leaving room for them” to be creative and responsible, he said.

“But it is necessary to be careful not to reduce the parish to the rank of a ‘branch’ of a ‘business,’ in this case, the diocese, with the consequence of it being able to ‘be managed’ by anybody,” even by groups of administrators or professionals with different skill sets, he said.

A Check-up for the Parish