Guardian Angels: Safeguarding Minors Is A Mandate, Not A Choice 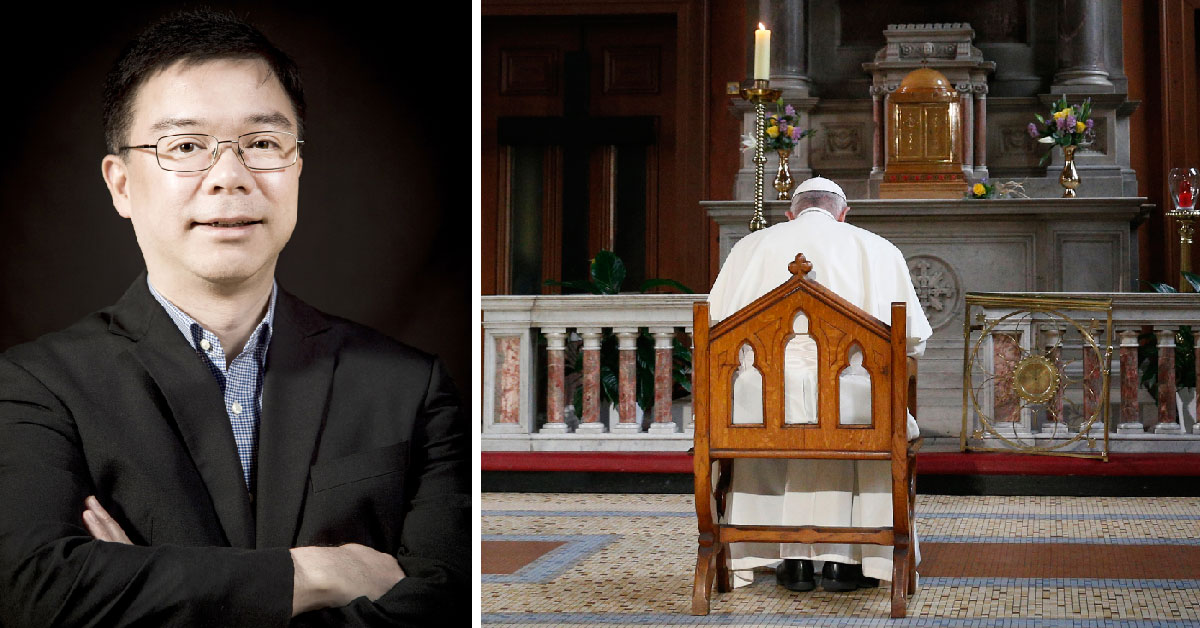 (Left)Gabriel Dy-Liacco, a psychotherapist and one of the founding members of the Pontifical Commission for the Protection of Minor. (Photo:CNS) (Right) Pope Francis is seen in a file photo praying in front of a candle in memory of victims of sexual abuse as he visits St. Mary’s Pro-Cathedral in Dublin. (CNS photo/Paul Haring)

By Carol Glatz – Concern and frustration with delayed and failed responses to abuse scandals in Poland culminated in a desperate appeal to Pope Francis to help “rebuild our church.”

More than 600 Polish lay Catholics pooled together enough money to buy an ad in an Italian newspaper at the end of June in a last-ditch effort to make sure the pope would hear their plea.

But together with assurances of his prayers and acknowledgement of their appeal, the pope’s steadfast position was repeated: It is going to take everybody in the Catholic Church doing everything possible to make sure church law is applied, abuse is exposed and those guilty of these serious crimes are punished.

In other words, fighting abuse and ensuring accountability cannot be a one-man operation; this global, insidious problem needs a pope backed by a global army.

Gabriel Dy-Liacco, a psychotherapist and one of the initial members of the Pontifical Commission for the Protection of Minors, said when Pope Francis met with commission members in 2017, he told them to tell everyone, “‘I cannot do this alone, I need your help.’ The Holy Father has no illusions about his capacity as a single person.”

When it comes to safeguarding, Pope Francis has a very clear vision for the church that he has spelled out numerous times, Dy-Liacco said in a recent online seminar.

Safeguarding is not some administrative or legal task that has been tacked on recently and just needs ticking off; it lies at the very heart of the Gospel as a concrete mandate given by Jesus and, as such, it is central to the mission and vocation of every Christian, Dy-Liacco said.

Dy-Liacco was one of a number of speakers for a summer series organised by the International Union of Superiors General with the collaboration of the papal commission, the Center for Child Protection of Rome’s Pontifical Gregorian University and the “Telefono Azzurro” abuse hotline in Italy.

The online talks, drawing hundreds of religious women and men, safeguarding personnel and others, were a way to deepen people’s awareness and skills and keep the pressure on against complacency during the COVID-19 pandemic.

Dy-Liacco’s talk June 30 reemphasized Pope Francis’ stance, which abuse experts have been keen on disseminating to laity and church leadership.

Jesuit Father Hans Zollner, another commission member, told new bishops in 2018 that protecting the vulnerable lies at “the core of our attention and mission.”

It is not some burden that is taking people away from their “‘real’ ministries. This is the DNA of the church, and it needs to be automatic, without thinking twice about it,” he said during a series of talks, courses and reflections all newly ordained bishops are obliged to attend in Rome.

That year, Father Zollner told the new bishops that new laws and procedures are needed, but they are never enough.

“There is talk of getting all levels of the church involved in finding a solution, but it seems that there is resistance to accountability at all levels as well. Appealing to Rome is easier. Taking concrete action is much harder,” he said.

Dy-Liacco said, because the church’s role is to lead people to God, “we were expected to be a guardian. And we failed. Instead, what did we do? Cover up? Deny? Silence?” Leaders also transferred abusers elsewhere and dedicated more resources or rehabilitation to the offender, and not enough for the victim, he added.

“We do not have a ministry for victims, unlike our ministry to the youth, which is worldwide in every diocese, in every parish. And most religious orders have some kind of youth ministry,” he said.

The first step is acknowledgement and awareness when it comes to abuse, prevention and adequate responses, he said.

However, this awareness is not universally or consistently present in the church, and it easily could be, he said.

“Think about Laudato Si’,” he said.

Just months after the pope’s encyclical on care for creation was published, “it’s everywhere. You go to a remote parish in the bush or the mountains and you will see something there about Laudato Si’. That’s what I mean by acknowledgement and awareness as the first step” and needing to see the issue everywhere, he said.

This is where each member of the church needs to step in and fill that gap, particularly in understanding and carrying out their role as a guardian for the least and the vulnerable.

“When there is no guardian — which includes not only a culture, an attitude, a disposition, a sense of mission, but also a system that can be carried out — victimisation will occur,” he said.

He said members of the church are “getting better” and “leadership is listening more,” but more has to be done to make this “guardianship” more present and accessible to the vulnerable and to show how to handle offenders correctly.

Dy-Liacco, who also treats priest offenders, said responses have to take into account that many child offenders “cannot control this particular aspect of their lives” and need serious restrictions imposed on them by others.

He said he sees a message in the crucified Christ telling the repentant thief on the cross, “that he is going to meet him in paradise, but he does not say, ‘I will remove your cross from you.'”

“In a similar way, perpetual restriction can be the salvation for someone who is not in control of his offending behaviour, who will never be in control of it, no matter how intelligent or how functional the person may be with work or how charming,” he said.

Every Catholic has a choice, he said.

And, he said, Pope Francis has presented that choice as boiling down to just one of two standards — “the standard of Christ or the standard of the enemy.”