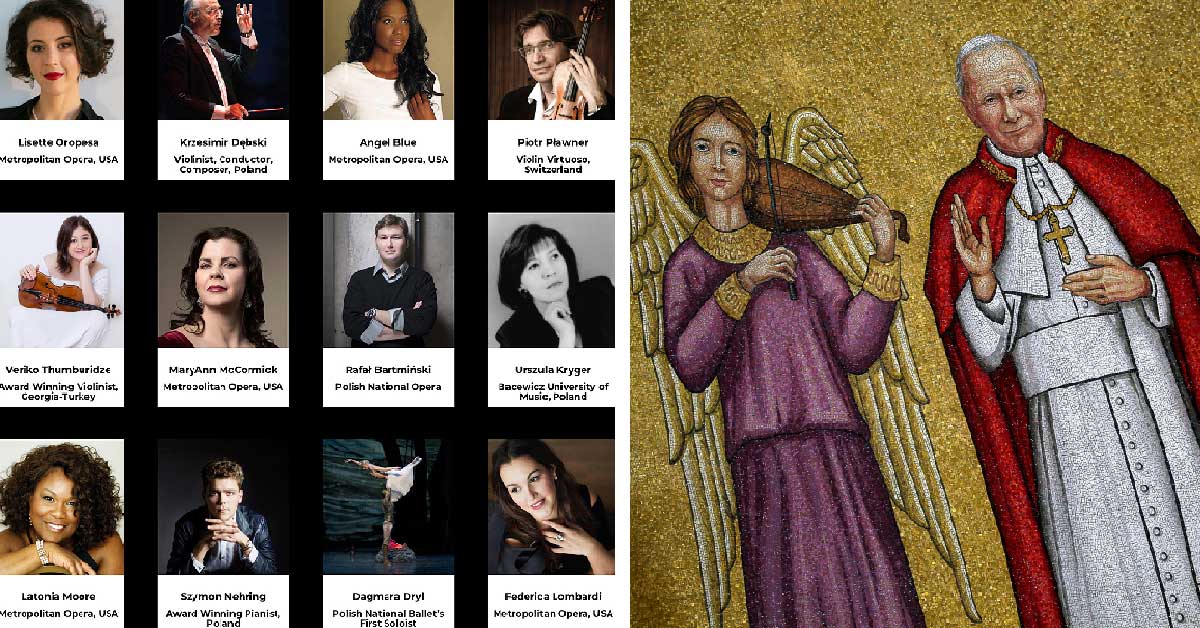 This is a screen grab of some of the artists who performed June 21, 2020, in memory of St. John Paul II. The concert is now available for online viewing. (CNS screen grab/jp2concert.com)

The concert, featuring some of the United States and Poland’s top classical music artists, was held and is now online at https://jp2concert.com. John Paul’s birth was May 28.

The concert features introductory remarks from Polish Archbishop Stanislaw Gadecki of Poznan, president of Poland’s bishops’ conference, and Cardinal Timothy M. Dolan of New York. The performances can be seen at https://jp2concert.com. The total running time is two hours and 47 minutes.

The musical program begins with pianist Szymon Nehring, in a church courtyard, playing a solo piano rendition of “Etude in C# Minor, No. 25, Op. 9,” written by one of Poland’s musical treasures, Fredric Chopin.

The concert also features the world premiere of the arias from the opera “Hiob” by Krzesimir Debski, which was based on a play by Karol Wojtyla, who later became Pope John Paul.

The event was held under the patronage of the John Paul II Foundation in Rome, the Institute of the Heritage of National Thought, the Center for Thought of John Paul II in Warsaw, the Polish Community Association, the Consulate General of the Republic of Poland in New York and the Jozef Pilsudski Institute of America.

It chief sponsor was the Culture and Art Foundation, known by its Polish acronym FKIS, which promotes Polish culture and art.

Its mission “creates a positive image of Poland, arouses interest of the international community in Poland’s history, culture and art,” according to the organisation’s website.

“It aims to increase the visibility of Polish culture abroad, through activities to strengthen the Polish community’s ties with their homeland, organising activities aimed at maintaining and promoting national traditions, increasing national, civic and cultural awareness, education through art, propagating patriotic values, awakening interest in Polish history, teaching respect for the homeland and its heroes, shaping the attitudes of modern patriotism,” it added.