July 16 Virtual Pilgrimage to Lourdes for Prayer Against Covid-19 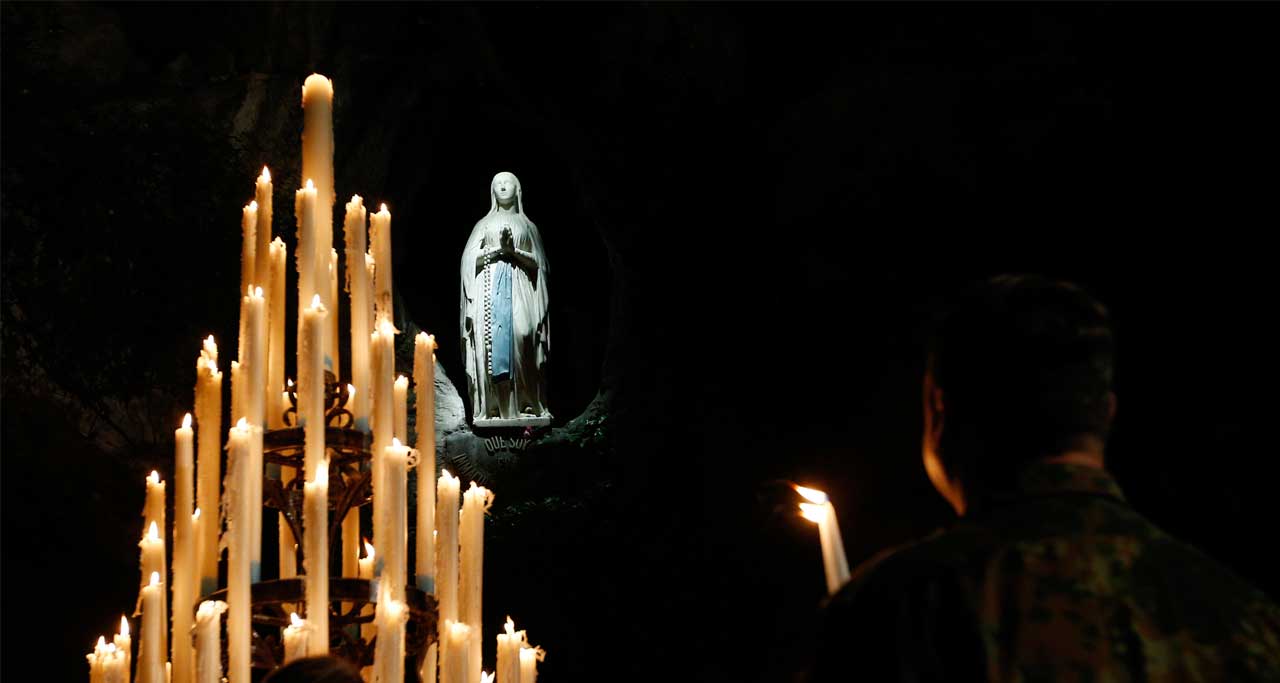 Candles are seen around a statue of Mary in the grotto at the Shrine of Our Lady of Lourdes in France in this file photo. The shrine will hold a worldwide virtual pilgrimage July 16, the anniversary of the last apparition of Mary. (CNS photo/Paul Haring)

By Jonathan Luxmoore – An international virtual pilgrimage to the sanctuary of Lourdes, France, will “affirm the power of prayer” against Covid-19, said the shrine’s vice rector.

“Lourdes is all about spiritual and physical healing, and we’ve received 15,000 prayer petitions daily throughout the lockdown from around the world — for people about to die or fearing infection,” said Father Xavier d’Arodes de Peyriague, vice rector and head of international pastoral ministry.

“We quickly realised we weren’t just praying for people in Lourdes, but for those in need worldwide – and this e-pilgrimage will honour their presence in a great affirmation of the power of prayer.”

The priest spoke amid preparations for the July 16 event, marking the French site’s official reopening after four months’ closure.

In an interview with Catholic News Service, he said the 15-hour multigenerational and multicultural e-pilgrimage would include rosary recitals, lectures, music and archival videos in 10 languages illustrating the centre’s mission, as well as three consecutive international Masses for Asia and Oceania, Europe and Africa, and the Americas.

“This shrine has never closed previously – not even during two world wars and other major traumas, and it’s been extraordinary to stand alone at its normally crowded grotto,” Father d’Arodes said.

“We’ve had to adjust our prayers from a focus on individual healing to the challenges of a pandemic. But five times the normal numbers are now following us on social networks, while we’re broadcast on Catholic channels worldwide.”

Lourdes, close to the southern Pyrenees Mountains, annually attracts up to 5 million visitors and has been a place of pilgrimage since 1858, when St Bernardette Soubirous, 14, experienced the first of 18 visions of the Virgin Mary while gathering firewood.

A website statement said the sanctuary faced a “historic loss” of 8 million euros ($9.06 million) from its enforced shutdown and would be appealing for funds during the virtual pilgrimage.

In his interview, Father d’Arodes said Lourdes depended heavily on the knowledge and talents of 320 full-time employees, as well as up to 100,000 volunteers who came each year, and had done its best to retain them.

However, he cautioned it was still unclear when medical conditions and travel possibilities would allow sick pilgrims to return.

“For now, it’s recommended the fragile and vulnerable remain at home – though some handicapped people have come, we’ve had to change the way things are done here, closing the sanctuary’s baths, suspending processions and restricting torchlight rosaries,” he said. “But people are in need of faith and hope, and we’ve instead been animating the digital community, which is building amazingly all the time.”