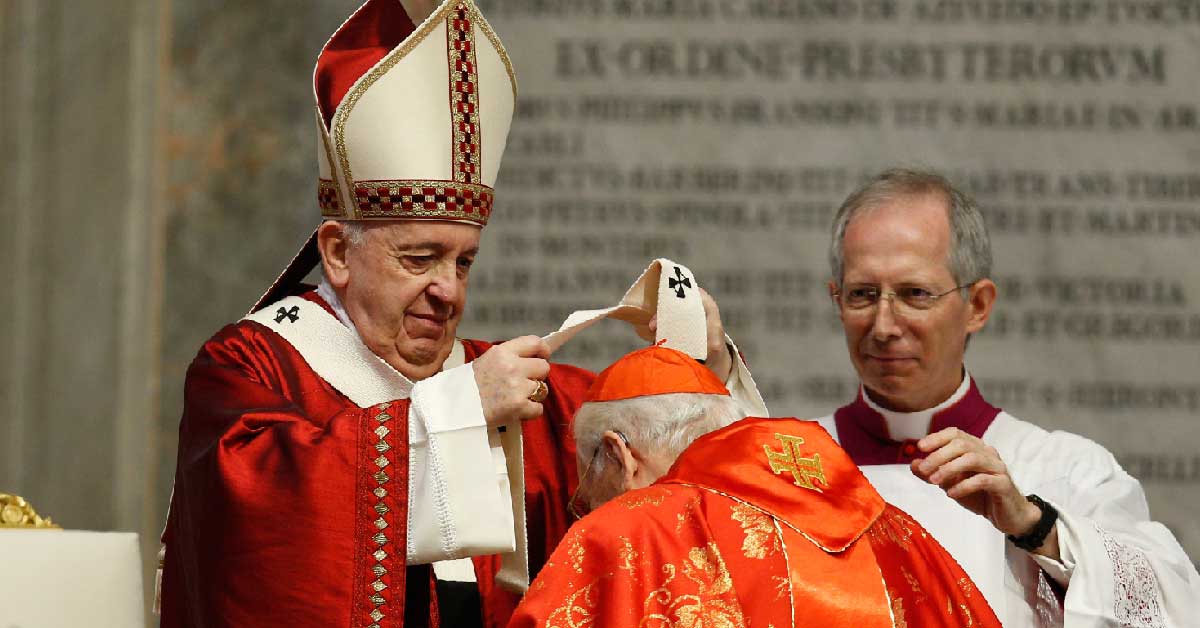 Pope Francis places a pallium on Cardinal Giovanni Battista Re, dean of the College of Cardinals, as he celebrates Mass marking the feast of Sts. Peter and Paul in St. Peter’s Basilica at the Vatican. (CNS photo/Paul Haring)

By Carol Glatz – Some people always will want to destroy unity and stifle prophets, Pope Francis said on the feast of Sts. Peter and Paul.

And yet, Jesus challenges everyone to be – like Peter – a rock for building a renewed church and renewed humanity, and – like Paul – a missionary who brings the Gospel to others, he said during a Mass in St. Peter’s Basilica.

People also need to complain less and pray more, especially for those who govern, the pope said.

People must ask themselves whether they “simply talk and do nothing” because God wants people to pray and “be mindful of those who do not think as we do, those who have slammed the door in our face, those whom we find it hard to forgive.”

The feast day celebration in St. Peter’s Basilica was markedly different from other years because of ongoing restrictions in place to stem the spread of Covid-19. Normally archbishops appointed over the course of the previous year would have been invited to concelebrate the feast day Mass with the pope and watch as he blessed their palliums, woolen bands worn around their shoulders.

But the archbishops were not there. Instead, a congregation of about 90 people attended the Mass concelebrated by the pope, nine of the 11 cardinal-bishops resident in Rome and the archpriest of St. Peter’s Basilica, Cardinal Angelo Comastri.

While the actual imposition of the pallium was to take place in each archbishop’s archdiocese, Pope Francis did place a pallium on Cardinal Giovanni Battista Re, the new dean of the College of Cardinals. Conferring a pallium on a new dean was a custom begun by St. John Paul II.

The pallium symbolises an archbishop’s unity with the pope and his authority and responsibility to care for the flock the pope entrusted to him. The pope blessed the palliums after they were brought up from the crypt above the tomb of St. Peter.

In his homily, the pope said Sts. Peter and Paul demonstrate unity in diversity; they were two very different individuals, who sometimes argued heatedly, but they saw one another as brothers, united by Jesus.

Jesus “did not command us to like one another, but to love one another,” the pope said. “He is the one who unites us, without making us all alike.”

When the early church faced fierce persecution, the pope said, “no one ran away, no one thought about saving his own skin, no one abandoned the others, but all joined in prayer,” which created “a unity more powerful than any threat.”

They also prayed instead of complaining about the injustice they faced, the pope added.

“It is pointless, even tedious, for Christians to waste their time complaining about the world, about society, about everything that is not right,” he said. “Complaints change nothing.”

“Are we protecting our unity with prayer, the unity of the church?” the pope suggested people ask themselves. “Are we praying for one another? What would happen if we prayed more and complained less?”

The answer, he said, is what happened to Peter in prison: closed doors open and chains break.

The pope asked people to pray for everyone, especially those who govern.

“God will judge them, but we should pray for those who govern. Pray. They need prayers. This is a task that the Lord has entrusted to us. Are we carrying it out? Or do we simply talk, insult them and that’s all?” he said.

The feast day also highlights the importance of prophecy, which is “born whenever we allow ourselves to be challenged by God, not when we are concerned to keep everything quiet and under control,” Pope Francis said.

“Today the world needs real prophecy, not fast talkers who promise the impossible, but testimonies that the Gospel is possible,” he said.

“What is needed are not miraculous shows,” he said, “but lives that show the miracle of God’s love. Not forcefulness, but forthrightness.”

The world needs “not speeches, but service. Not theory, but testimony,” he said. “We are not to become rich, but rather to love the poor. We are not to save up for ourselves, but to spend ourselves for others. To seek not the approval of this world, but the joy of the world to come. Not better pastoral plans, but pastors who offer their lives — lovers of God.”

Before the Mass, the pope had spent a few minutes alone praying in the crypt above St. Peter’s tomb. Customarily, he would have been joined by the head of a delegation from the Orthodox Ecumenical Patriarchate of Constantinople, but “it was not possible because of the pandemic,” the pope said after praying the Angelus.

“Spiritually I send an embrace to dear brother Patriarch Bartholomew, in the hope that our mutual visits may resume as soon as possible,” the pope said.

During his Angelus address, the pope said Jesus called Simon, “Peter” or “rock,” not because he was a “solid and trustworthy man. No, he made many mistakes,” even denying Jesus.

Peter is the rock because “he chose to build his life on Jesus,” not on himself, the pope said. “Jesus is the rock on which Simon became stone.”

St. Peter became a hero “because he gave his life here. His gift transformed a place of execution into the beautiful place of hope in which we find ourselves,” the pope said to the sparse crowd spread out in St. Peter’s Square.