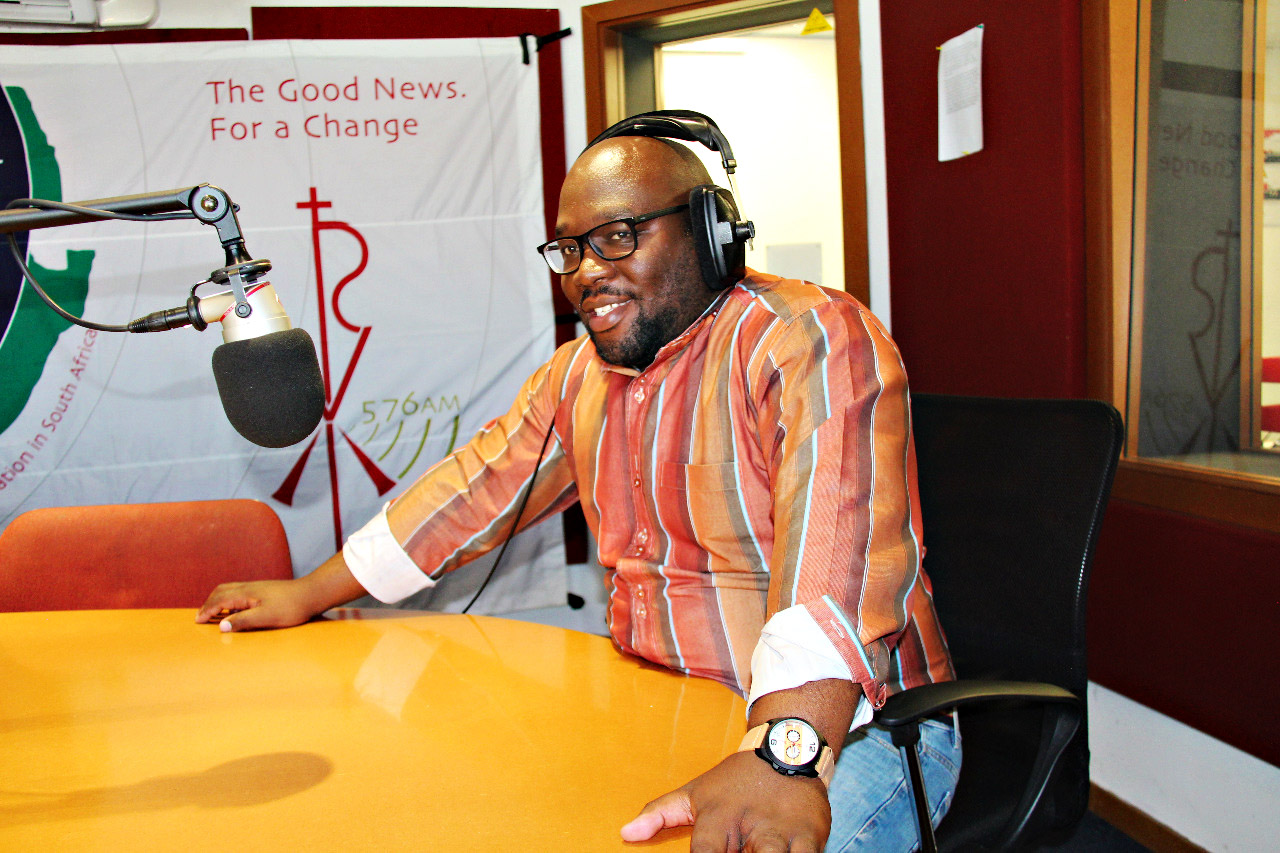 By Daluxolo  Moloantoa – One of the things that is  impacted by the Covid-19 crisis is social activities: classes, groups and gatherings.

The Internet has already partially saved our social lives, via apps such as Zoom for chatting with our family, friends and colleagues. For Catholics, there is a plethora of livestreamed Mass and other services.

Still, in spite of these services, our hymnals are neatly stacked away, and our churches no longer reverberate with song.

The KwaZulu Natal-born and married father of three hosts the popular music variety programme “Soothing Melodies” on Sundays at 14:00 on the station.

The programme serves to promote Catholic gospel and choral music from across Southern Africa.

It also aims to share weekly reflections from a variety of sources, most especially members of the clergy and lay people.

Mr Ndlovu, who is himself an accomplished singer and choral maestro, fell in love with music due to family influence.

“My late parents met in the church choir at my hometown parish in Ladysmith in northern KwaZulu-Natal. My mother was a choir conductor, and my father was a bass singer,” he explained.

He matriculated at the well-known Benectine-run school Inkamana High in Vryheid, in KwaZulu Natal. He went on to further his studies at the Cape Peninsula University of Technology and Unisa.

A qualified engineer, Mr Ndlovu works on a fulltime basis as a marking specialist for Armscor.

He said that, apart from the influence at home, he was reared with a love for music by his high-school choir conductor, John Gregory.

“Mr Gregory was a musically very generous Welshman who taught me the basics of music theory, and a whole lot more on voice production techniques,” he said.

How He Got Started

Mr Ndlovu started working at Radio Veritas in March 2018, after some short stints as host and presenter of both the SABC1 choral music performance programme “Imizwilili”, and the Old Mutual National Choir Festival.

His road to anchoring a show on Radio Veritas began with meeting ex-programme host Fr Thabo Mothiba OMI, through a connection with the Catholic twin-sister singing duo The Light (who featured in the May 30 issue of The Southern Cross).

“In 2018, after learning about my music backround, Fr Mothiba invited me to cohost a music variety programme with him on Radio Veritas. I appreciated the opportunity, and took it with both hands,” Mr Ndlovu said.

“Due to his pastoral responsibilities, in early 2019 Fr Mothiba was forced to relinquish the programme’s cohost position. I have since revamped the programme, and have been flying solo as a main host.”

He said he loves music and radio equally. “They are too closely intertwined to separate. Music is my passion, and my platform on the radio affords me the opportunity to practise and promote this passion.”

As a media man in the Church, Mr Ndlovu believes that Catholic media workers must be exemplary role models to the faithful and, especially, non-Catholics.

“While we display our pride in being Catholics in media, we also have to be accommodating and appreciative of others, especially to those foreign to our Catholic backround. This necessitates that we know, comprehend and live the essence of the word ‘Catholic’,” he said.

“Our Catholic media platforms, such as Radio Veritas, should strive to promote the Catholic voice in our larger society. Invariably, they should also take an unequivocal stand against those who aim to deliberately or unintentionally tarnish the Catholic ‘brand’,” he added.

For the immediate future, Mr Ndlovu hopes to firstly grow his radio show. Secondly he would like to make an impact on young people’s lives through music training.

“My other dream is to create a platform to nurture and promote young musicians to reach their full potential. When passion meets with purpose, even the sky’s not the limit,” Mr Ndlovu said.