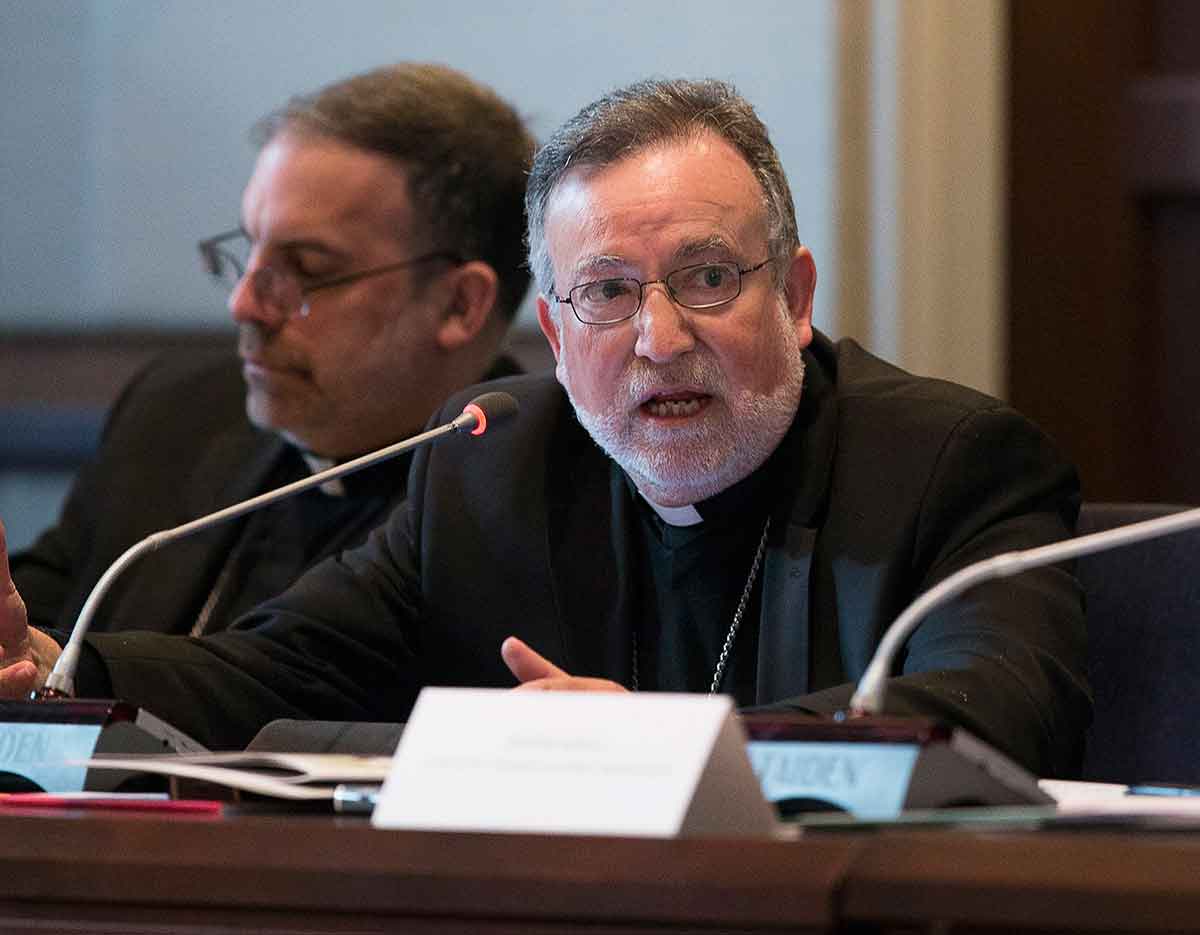 Bishop Jaime Soto of Sacramento, Calif., speaks at the headquarters of the U.S. Conference of Catholic Bishops in Washington Jan. 17, 2018. On Aug. 7, 2020, Bishop Soto announced the automatic excommunication of Father Jeremy Leatherby, a suspended priest, for continuing to say Mass and for using Pope Benedict XVI’s name, instead of Pope Francis’ name, during Mass. (CNS photo/Tyler Orsburn)

A suspended priest in the Diocese of Sacramento has been automatically excommunicated because he continued to celebrate Mass despite being instructed not to do so by Bishop Jaime Soto, and he also has refused to acknowledge Pope Francis as head of the Catholic Church.

In an Aug. 7 letter to Catholics of the diocese, Bishop Soto announced Father Jeremy Leatherby “has placed himself and others in a state of schism with the Roman Catholic Church. By his words and actions, Father Leatherby has incurred a ‘latae sententiae’ (automatic) excommunication.”

“This means that by his own volition he has separated himself from communion with the Roman pontiff, Pope Francis, and other members of the Catholic Church,” the bishop said.

In March 2016, Father Leatherby was removed as a pastor from Presentation of the Blessed Virgin Mary Parish in Sacramento and suspended from priestly ministry, while an investigation was begun into an allegation he had engaged in sexual misconduct with a woman. Hundreds of his supporters signed a petition saying the allegation was false and urged the bishop to lift his suspension.

“Father Leatherby has violated my instructions by offering Mass and teaching publicly to a number of the faithful. He has instructed them against the legitimacy of His Holiness, Pope Francis,” Bishop Soto said in the Aug. 7 letter. “He has substituted the Holy Father’s name with the name of his predecessor,” retired Pope Benedict XVI, “and has omitted my name during the recitation of the Eucharistic Prayer while offering Mass.”

In an Aug. 3 letter to the priest, Bishop Soto told him the actions “have placed you and others in grave moral danger” and that he must stop any sacramental ministry and “must assume a life of prayer and penance under my direction.”

Since the pandemic began this March, forcing many closures, including houses of worship, across the country as local and state governments tried to stop the spread of the coronavirus, Father Leatherby was offering weekly Masses for small groups in private homes. Altogether, attendees have numbered about 350.

In a statement Aug. 6, the priest said that “in a state of emergency, even laicised or ‘former’ priests can, and perhaps even are morally obliged to, offer the sacraments for the faithful.”

He explained that initially he took Communion hosts he had earlier “consecrated in private Masses” to different homes. Soon he was driving all over town “all day, every Sunday,” he said, to take “the Bread of Life” to Catholics, so he began offering Masses in people’s homes.

“However, I have celebrated (these Masses) in union with Pope Benedict, not with Pope Francis. Many who have joined me hold, like I do, that Benedict remains the one true pope,” he said in his statement.

The priest said he does not accept that the retired pope’s 2013 resignation”fulfills the requirements for a valid act of resignation from the papacy, according to canon law.” The pope cited failing strength of “mind and body.”

Father Leatherby issued his statement publicly but did not reply directly to Bishop Soto. “After obstinately not responding to a number of my inquiries by telephone and correspondence,” Father Leatherby “has now confirmed his schismatic stance,” the bishop wrote in his Aug. 7 letter.

“Because of the grave scandal of these actions I have no recourse but to announce publicly the consequence of his decisions: He has brought upon himself an automatic ‘latae sententiae’ excommunication,” Bishop Soto said.

He emphasised the excommunication is a separate issue from the “ongoing canonical process concerning other alleged behaviours by Father Jeremy Leatherby in violation of priestly promises.”

“This process admittedly has been long, is still continuing, and is in the hands of other ecclesiastical authorities,” Bishop Soto explained. “The events by which he has excommunicated himself are unrelated to these previous allegations and the ensuing investigation.”

Bishop Soto has instructed both clergy and the faithful “to refrain” from participating in “any further attempt by Father Leatherby to offer the Mass or other sacraments.”

“Join me in praying for his reconciliation and return to full communion with the Roman Catholic Church,” Bishop Soto wrote.

“May the intercession of our Blessed Mother Mary help Father Leatherby to repent of the harm he has inflicted on the church,” he said in conclusion. “With maternal solicitude, may she gather us together into the one communion of the church, holy and purified by the blood of the Lamb, her Son, Jesus.”