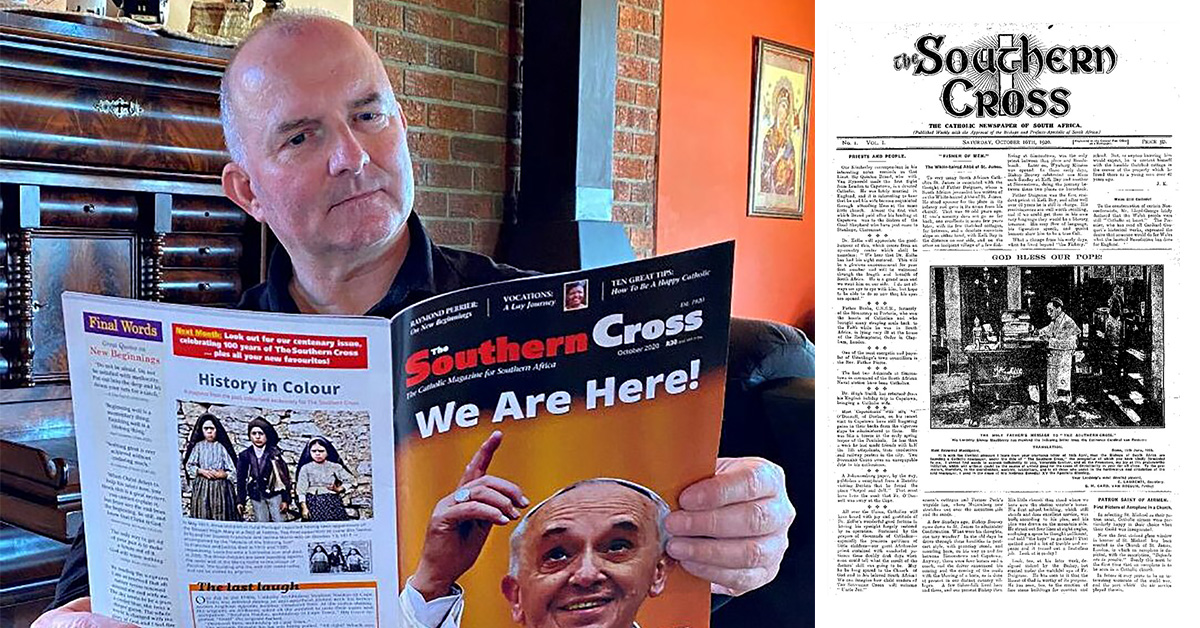 Günther Simmermacher, editor of The Southern Cross, peruses the first issue of the new monthly Southern Cross magazine, which replaces the weekly newspaper. The first issue of the magazine features Pope Francis on the cover, an echo of the first edition of the weekly 100 years ago, published on October 16, 1920, which featured Pope Benedict XV on the cover.

This is the final edition of The Southern Cross as a weekly newspaper, bringing to a close a run of more than 5 200 consecutive weeks of publication of the national Catholic newspaper.

The first edition of The Southern Cross was published on October 16, 1920, with Fr James Kelly as its editor. Since then it has never missed a week’s publication.

The Southern Cross will live on as a monthly magazine, with the first issue, dated October, already printed and in distribution.

“The end of the newspaper was inevitable,” said Rosanne Shields, chair of the board of directors of The Southern Cross.

“The newspaper industry has been declining ever since the rise of the Internet, and for a long time The Southern Cross was punching above its weight,” she said.

“In discussions with our editor, Günther Simmermacher, we had already decided last year to investigate the possibility of transitioning from a newspaper to a magazine, with a view of possibly relaunching in 2021, after concluding our centenary,” Ms Shields said.

“The coronavirus pandemic and the national lockdown forced us to change plans,” she noted.

“When the churches closed in lockdown, we lost our main points of sales. And because the Post Office was in effect inoperative and couldn’t be used for distribution, there was no point in printing the newspaper.”

The last printed newspaper was that of March 27. Since then, The Southern Cross has appeared weekly in digital format, with subscribers receiving the latest editions on Wednesdays. These then have been made available for free on Sundays.

“That was a way of bringing the Church into the homes of Catholics at a time when they couldn’t go to church,” said Mr Simmermacher.

Ms Shields noted that subscriptions shot up in that period.

“There is a lot of support for The Southern Cross in the Catholic community, which we could also see in the generous contributions to our Associates Campaign and in once-off donations,” she said.

“Without that support, we would not have survived.”

At the end of July, all staff were retrenched. Three of them — business manager Pamela Davids, digital editor Claire Allen, and Mr Simmermacher — were appointed to their old positions on a freelance basis to keep the weekly going until the end of September while also developing a magazine, to be launched for the centenary month of October.

Ms Davids said the response from parishes regarding stocking the Southern Cross magazine has been largely good, though some have been cautious about ordering copies because of Mass restrictions.

“Sadly, some parishes told us not to send any copies, but then other parishes actually increased from their old order because they know that they can sell the magazine over a whole month, rather than just one week,” she noted.

While the magazine is a monthly publication, the Southern Cross website (www. scross.co.za) will feature the latest news, weekly reflections on the Sunday Mass readings, and commentaries.