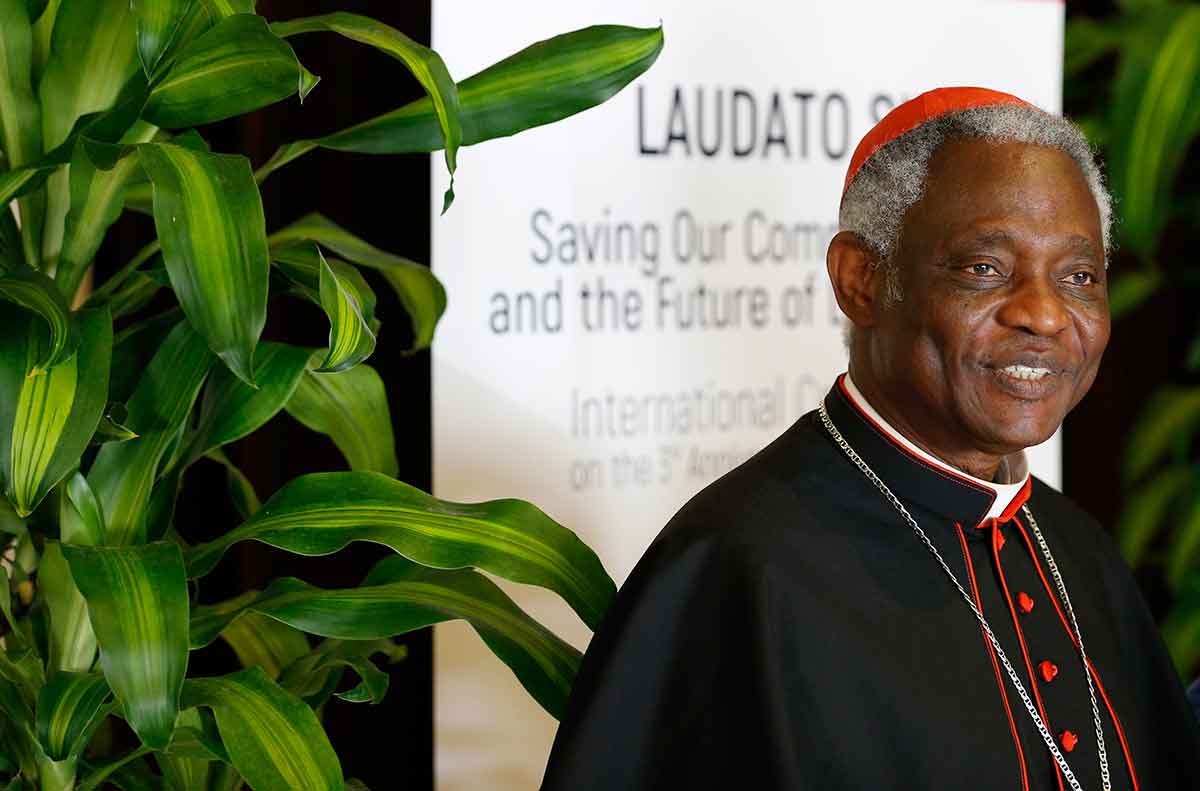 Cardinal Peter Turkson, prefect of the Dicastery for Promoting Integral Human Development, is pictured at the Vatican in this July 5, 2018, file photo. Cardinal Turkson addressed the World Meeting of Popular Movements, an initiative of Pope Francis, during its Oct. 24 online meeting. (CNS photo/Paul Haring)

By Junno Arocho Esteves – The rise of popular movements around the world is proof that today’s profit-driven economic system fails to place human dignity at its centre, said Cardinal Peter Turkson, prefect of the Dicastery for Promoting Integral Human Development.

Addressing the World Meeting of Popular Movements, which was held online October 24, Cardinal Turkson said there are “inequalities, lack of access to health care, cruel economic systems and that is why the (coronavirus) exposes us to many other pandemics that must be addressed.”

“They all have one thing in common: they undermine human dignity in all structures of our countries, (and) we must repair them,” the cardinal said.

Cardinal Turkson also highlighted Pope Francis’ recent encyclical, “Fratelli Tutti, on Fraternity and Social Friendship,” which he called an “appropriate and apt” response to the “inequalities and the deficits in dignity in which we find ourselves today.”

The annual meeting, which brought together participants from a variety of grassroots organisations of the poor, the underemployed, indigenous communities and farmworkers, was held virtually due to the coronavirus pandemic.

After the meeting, organisers published an open letter to Pope Francis ahead of a Vatican-sponsored meeting Nov. 19-21 with young economists and entrepreneurs to discuss practical ways to make the global economy more inclusive and just.

The meeting, which was originally scheduled for Assisi in March, also will be held virtually due to travel restrictions caused by the pandemic.

In their letter to the pope, participants of the World Meeting of Popular Movements said the current “socio-environmental crisis cannot be overcome within the framework of the globally hegemonic capitalist system.”

“Our intention here is to provide elements for imagining an alternative system that will overcome and eradicate the worldwide idolatry of money that structures the global economy and our lives,” participants wrote. “We need an economy centred on nature, on men and women.”

Reflecting on the pope’s emphasis on the basic rights of people on the margins of society, rights that include “land, shelter and labour,” the participants denounced “certain sectors (that) seek to domesticate his thinking and confine it within the narrow margins of administering what already exists.”

“They want only small reforms, small projects, and small utopias within the horizon of what is possible. Among them are found perpetrators of the most heinous environmental and social crimes, who would seek to wash their hands clean by financing events in his name,” the letter said.

Offering proposals centred on integral ecology, economic democracy, education and peace, the participants said they hope to “collaborate in creating and demonstrating alternative experiences of living and working that allow us to make use of the goods of nature in ways that respond not to the logic of the god money, but to our people’s need to live well.”

“Without failing to acknowledge the breadth of (Pope) Francis’ thought or claiming to have the only correct interpretation of it, we want to propose a vision that we consider in tune with the radical nature of his teachings and the revolutionary nature of Christian faith,” they wrote.