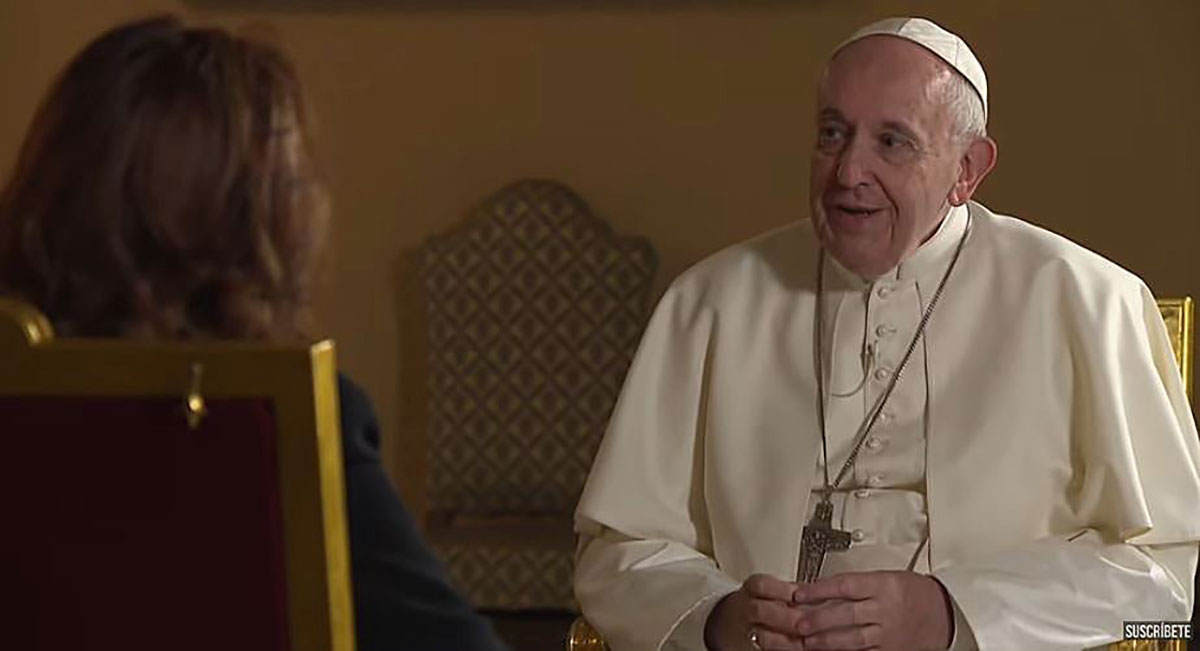 Pope Francis speaks with Valentina Alazraki of the Mexican television station Televisa during an interview that aired in May 2019. Clips, apparently cut from the interview and showing Pope Francis talking about “civil unions,” is used in the documentary “Francesco” by Evgeny Afineevsky. (CNS screenshot/Noticieros Televisa via YouTube)

In his documentary “Francesco,” director Evgeny Afineevsky presented the statements as if Pope Francis had said them one right after the other; the director used the quotes immediately following a story about a gay couple with children.

Released October 21, the film gave some people the erroneous impression that Pope Francis approved civil union laws that would equate gay couples to married couples. Pope Francis consistently has said that gay people deserve love, respect and the protection of the law; however, he has insisted marriage can be only between a man and a woman.

Afineevsky, who a Vatican official said was never granted an on-camera interview with the pope, pulled the quotes about families and the quote about civil unions from a 2019 interview by Valentina Alazraki, correspondent for the Mexican television station Televisa.

When the Vatican, which filmed the interview, gave Televisa the footage, the quotation about civil unions had been cut.

Catholic News Service obtained the complete transcript of the uncut interview, including the comment about civil unions. The pope, speaking in Spanish, referred to “una ley de convivencia civil,” literally a “law of civil cohabitation,” but commonly called a civil union.

The clips used in Afineevsky’s film put together quotes from three separate moments of the Televisa interview, so the pope appears to say: “They are children of God and have a right to a family. Nobody should be thrown out or be made miserable over it. What we have to create is a civil union law. That way they are legally covered.”

At one point in the interview — in the piece aired on Televisa and included in transcript the Vatican originally put online — Alazraki and the pope spoke about the “journey” of discernment and conversion he called for in his exhortation on the family, “Amoris Laetitia,” and about the habit of referring to certain people as being in “irregular” situations.

“If we were convinced that they are children of God, things would change quite a bit,” the pope says.

Then he brings up his response in August 2018 to a journalist who had asked what he would say to a father whose son or daughter tells him he or she is gay.

On the plane returning from Ireland, he had responded: “I would tell him first of all to pray. Pray. Don’t condemn, (but) dialogue, understand, make room for his son or daughter.”

The parent should respond, “You are my son; you are my daughter, just as you are. I am your father or your mother, let’s talk about this,” he had said. “And if you, as a father or mother, can’t deal with this on your own, ask for help, but always in dialogue, always in dialogue. Because that son and daughter has a right to family, and their family is this family, just as it is. Do not throw them out of the family.”

In the interview with Alazraki, Pope Francis paraphrased his earlier responses, saying, “Homosexual persons have a right to be in the family and the parents have a right to recognize this son as homosexual, this daughter as homosexual. Nobody should be thrown out or be made miserable over it.”

The pope explained to Alazraki how upset he was that a newspaper, reporting on his comments on the flight from Ireland, ran a headline saying that the pope said homosexuals should see a psychiatrist when he clearly meant that if parents see their son or daughter struggling with their sexuality, professional help might be a good idea.

“And I repeated it: ‘They are children of God and have a right to a family,’ and so on,” he told Alazraki.

The interview went on with a discussion about the media taking words out of context, and then Alazraki told the pope that people say he was a doctrinal conservative when he was in Argentina.

“I am a conservative,” he responded.

Alazraki pointed out that as archbishop of Buenos Aires, he opposed gay marriage.

“I’ve always defended doctrine. And it is curious about the law on homosexual marriage — it is a contradiction to speak of homosexual marriage. But what we have to create is a civil union law, that way they are legally covered. I defended that,” he said, referring to his efforts to support an alternative to legalising gay marriage that would still protect the rights of gay couples when it came to matters like inheritance, health care decisions and visitation when one is ill.