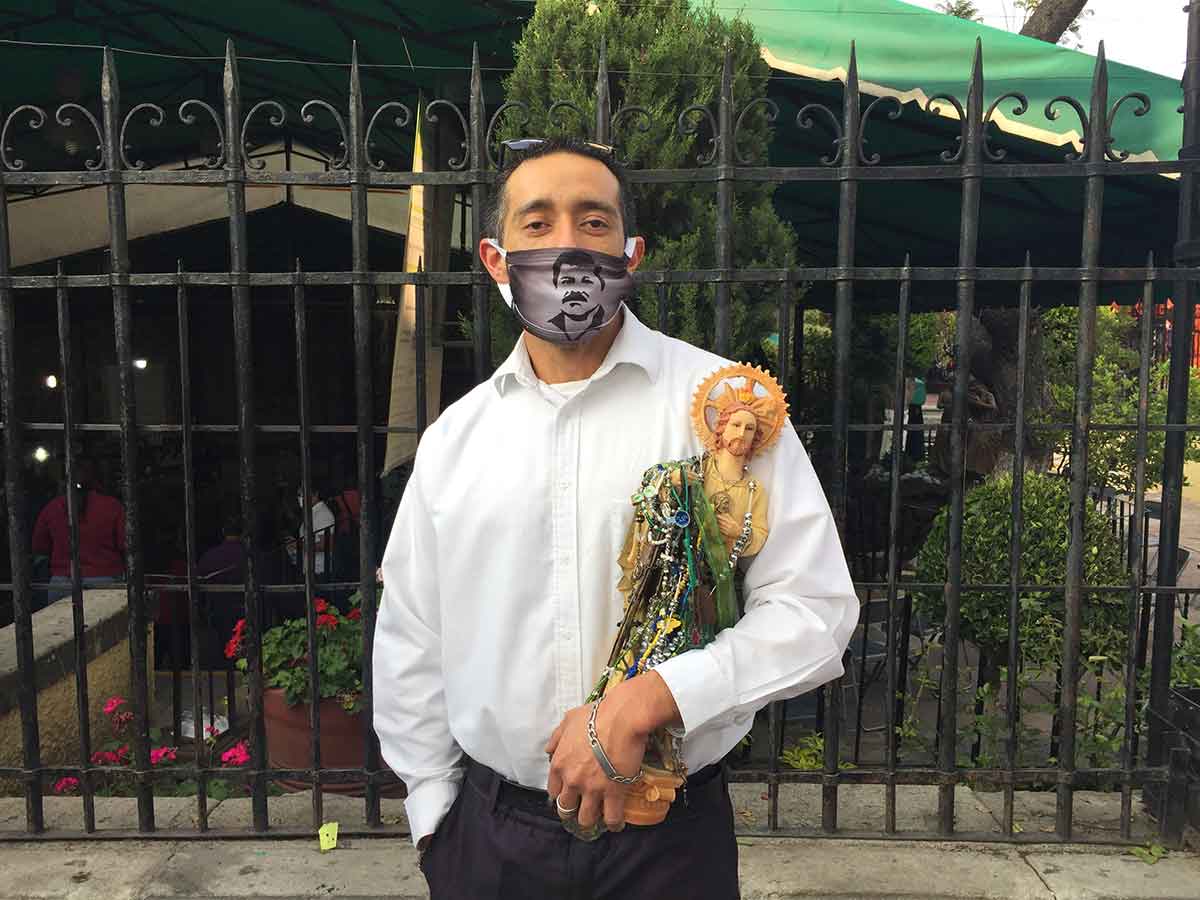 Arturo Rodriguez, wearing a protective mask, poses with a statue St Jude Thaddeus in Mexico City in late September during the Covid-19 pandemic. Rodriguez credits the saint with curing an injured relative and brings the statue to a monthly celebration in Mexico City, where devotion is strong. (CNS photo/David Agren)

By David Agren – Arturo Rodríguez asked St Jude Thaddeus “for a big favour.” A chauffeur in Mexico City, Rodríguez said a relative was robbed and slashed with a knife almost a decade ago, but made a miraculous recovery after the chauffeur prayed to St Jude Thaddeus, whom he learned about through friends.

Rodríguez, 31, confessed he does not attend his local parish all that often. “But I’m here every 28th,” he said from the St Hippolytus Church in central Mexico City, where St Jude is celebrated on the 28th of every month, not just on his official feast day of Oct. 28.

Devotees like Rodríguez articulate an almost transactional faith, in which they ask St Jude for intervention and promise to repay him with monthly visits to one of the many shrines erected in his honour around the country.

Such faith also covers the complications of life in Mexico and a devotion embraced by rich and poor alike, along with police and prisoners – and even people acting outside the law.

“Many say he helped people and the government didn’t. What he earned, he shared with the people,” Rodríguez said.

The devotion uncomfortably covers the legal and illegal, a line that’s often blurred in Mexico “as much for the police as people involved in illegalities,” said Rolando Macías, an ethno-historian who has studied St Jude.

Such is the popularity of St Jude that Macías ranked it Mexico’s second-most popular devotion, trailing Our Lady of Guadalupe and with the Sacred Heart of Jesus and folkloric Santa Muerte, a figure not recognised by the Catholic Church, not far behind.

“People link him with solutions for family problems and economic and health problems,” said Father Jesus Carlos Palacios, pastor of St. Jude Thaddeus Parish in the border city of Matamoros. “That’s why the image of St Jude Thaddeus is so attractive to people.”

In recent years, the devotion to St Jude has surged alongside a growing devotion to the Santa Muerte, with both being celebrated on a monthly basis and often drawing devotees from similar demographics.

Priests in the Diocese of Matamoros say an odd competition played out over the past decade. The Gulf Cartel venerated St Jude, while a rival, Los Zetas, venerated Santa Muerte. Both cartels built and maintained shrines.

“There were two factions clashing,” Father Palacios recalled, “and the ones belonging to (Santa Muerte) were expelled from the region.” He said he was not sure the clash “had anything to do with” the religious shrines.

In the northern city of Saltillo the weekend before the feast, Father Robert Coogan was to celebrate a special Mass in prison and also in a local neighbourhood, where devotees – not regular churchgoers – set up altars and organise a celebration in the street.

“These are not people who have had any extensive catechism or been active in their parishes,” he said of the devotees. “They understand that (St Jude) looks out for people like them – he’s a saint who looks out for them, and you don’t have to have any of the stuff the priests asks for. You just have to light your candle to St Jude and he’s going to take care of you.”

The coronavirus pandemic has forced the cancellation of celebrations at many parishes and at Mexico City’s St Hippolytus, a 16th-century church built by Spanish conquistador Hernán Cortés.

The monthly scene at St Hippolytus can be described as chaotic, as devotees clutch images and lug statues – from tiny to toddler-sized – and mariachis entertain the crowds. Some of the devotees bring statues of pseudo saints, such as Jesús Malverde, the “patron saint” of drug cartels.

The Claretian priests serving at St Hippolytus welcome everyone, but see their work as evangelising the devotees.

“Our work as a team is to combat false devotions,” said Claretian Father Mario González Segovia, rector at the St Hippolyte Church. They also clarify false perceptions, such as when people think St Jude is Judas Iscariot, he said.

The devotion to St Jude is common beyond Mexico, “but it’s not as exuberant” in other parts of Latin America and is often promoted by the Franciscans, said Macías.

In his research in Peru and Puerto Rico, Macías found people more likely to express their devotion through a parish celebration, while in Mexico “it’s completely autonomous.”

Investigators like Macías see the idiosyncratic way St Jude is celebrated in Mexico as part of a wider practice of people embracing popular piety in an individualistic way. Macías attributes the practice to people “being somewhat estranged from the church” due to persecution during the past century, when the Mexican government closed parishes and left people on their own.

“It’s popular especially among marginalised people who have a quasi-magical religion,” Father Coogan said of the devotion to St Jude. “They’re confident that heaven hasn’t forgotten them. At least St Jude … and some others haven’t forgotten them.”