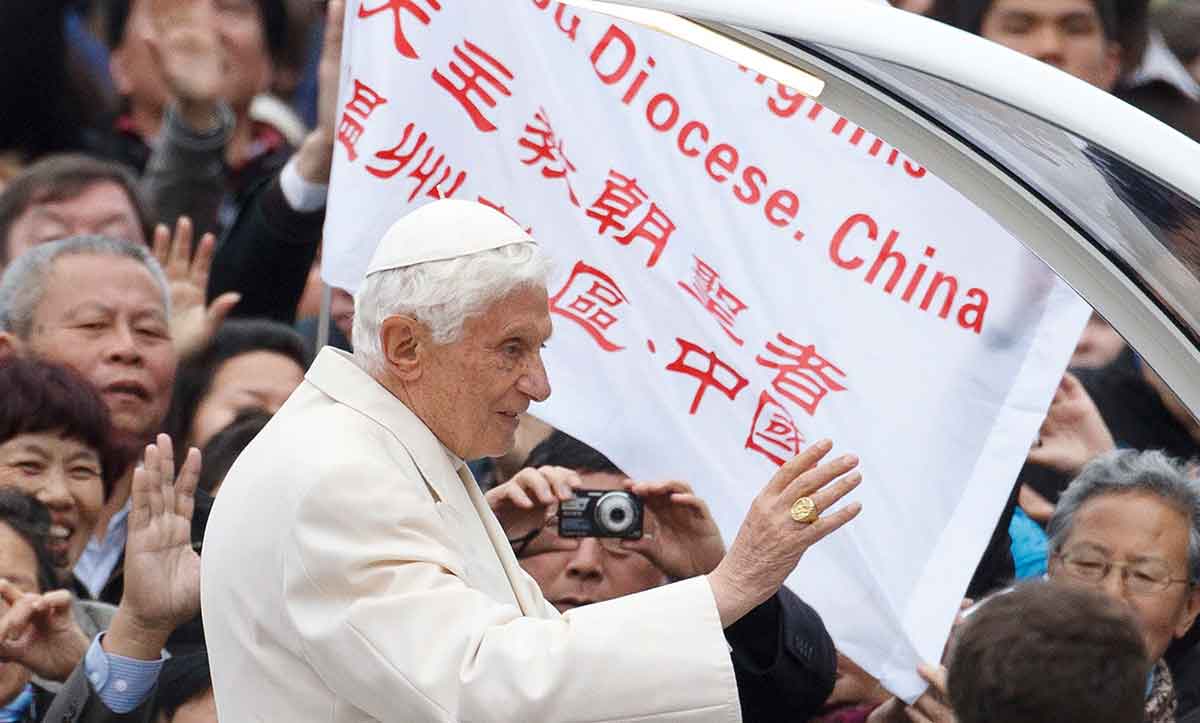 A banner from a diocese in China is seen as Pope Benedict XVI leads his general audience in St Peter’s Square at the Vatican on April 11, 2011. Cardinal Pietro Parolin, Vatican secretary of state, said that Pope Benedict XVI also approved of the Vatican-China agreement on bishops that Pope Francis plans to renew. (CNS photo/Paul Haring)

By Carol Glatz –  The Vatican and the Chinese government will extend an agreement signed in 2018 regarding the appointment of bishops.

As the initial agreement expired October 22, the two sides “have agreed to extend the experimental implementation phase of the provisional agreement for another two years,” the Vatican said in a communique the same day.

“The Holy See considers the initial application of the agreement – which is of great ecclesial and pastoral value – to have been positive, thanks to good communication and cooperation between the parties on the matters agreed upon, and intends to pursue an open and constructive dialogue for the benefit of the life of the Catholic Church and the good of Chinese people,” it said.

The agreement was first signed in Beijing September 22, 2018, and took effect one month later.

The provisional agreement, the text of which has never been made public, outlines procedures for ensuring Catholic bishops are elected by the Catholic community in China and approved by the pope before their ordinations and installations, according to news reports at the time.

Vatican officials always had said that giving up full control over the choice of bishops would not be what the Vatican hoped for, but that it could be a good first step toward ensuring greater freedom and security for the Catholic community in China.

Pope Francis told reporters in September 2018 that the agreement envisions “a dialogue about potential candidates. The matter is carried out through dialogue. But the appointment is made by Rome; the appointment is by the pope. This is clear. And we pray for the suffering of some who do not understand or who have many years of clandestine existence behind them.”

The Vatican newspaper, L’Osservatore Romano, published an article October 22 explaining the motivations for and objectives of the provisional agreement.

But the article also said it is important to recognise many situations of “great suffering” still exist for the faithful in China.

“The Holy See is deeply aware, is taking this well into account and does not fail to draw the attention of the Chinese government to the promotion of a more fruitful exercise of religious freedom,” it said.

“The journey is still long and not without difficulty,” it added.

The special role of the pontiff in the naming of bishops and among the community of bishops is what “inspired the talks and was the reference point in drawing up the text’s agreement,” the article said. “That will assure, bit by bit along the way, both the unity in faith and communion among the bishops, and full service fostering the Catholic community in China.”

The agreement has meant that, for the first time in decades, all of the Catholic bishops in China are in full communion with the pope and there will no longer be illegitimate ordinations, that is, bishops ordained with government approval, but not the Vatican’s consent.

In the two years since the agreement was first signed, two bishops acceptable both to the Vatican and to Beijing have been named and a number of other appointments are at various stages, the article said.

While that does not seem to be a big number, it said, it still marks a very good beginning in the hopes of continued positive results.

The main objective, it said, is to “support and promote the proclamation of the Gospel in these lands, reinvigorating the full and visible unity of the church.”

As top Vatican officials have already underlined, the article said the agreement focused only on the nomination of bishops, not the many other issues and situations that remain and “still cause concern for the church.”

It would be impossible to confront every issue at the same time, it said, which is why the provisional agreement also represents a starting point for broader and “forward-thinking” agreements in the future.

The current “experimental” agreement is the product of “an open and constructive dialogue,” it added.

Dialogue that is fostered by respect and friendship “is intensely desired and promoted by the Holy Father,” it said.

“Pope Francis is well aware of the wounds brought to the communion of the church in the past, and, after many years of long negotiations begun and pursued by his predecessors and in undeniable continuity with their thinking, he has re-established full communion with Chinese bishops ordained without papal mandate and has authorised the signing of the agreement on the naming of bishops, the draft of which had been already approved of by Pope Benedict XVI.”

In an interview October 21 with the Catholic newspaper, Avvenire, Cardinal Pietro Parolin, Vatican secretary of state, said that, on the whole, Vatican officials have been satisfied with the agreement.

However, he said, they also hoped there would be improvement and consistency in how its terms were carried out.

“It is hoped that the church in China rediscovers, thanks also to this agreement, unity and then through this unity it may become an instrument of evangelisation” and the promotion of authentic development for everyone, he said.

When asked if he was referring to the persecution of Christians, the cardinal replied, “What persecution! It is necessary to use terms correctly. There are rules that are imposed and that apply to all religions, and they certainly appertain to the Catholic Church.”