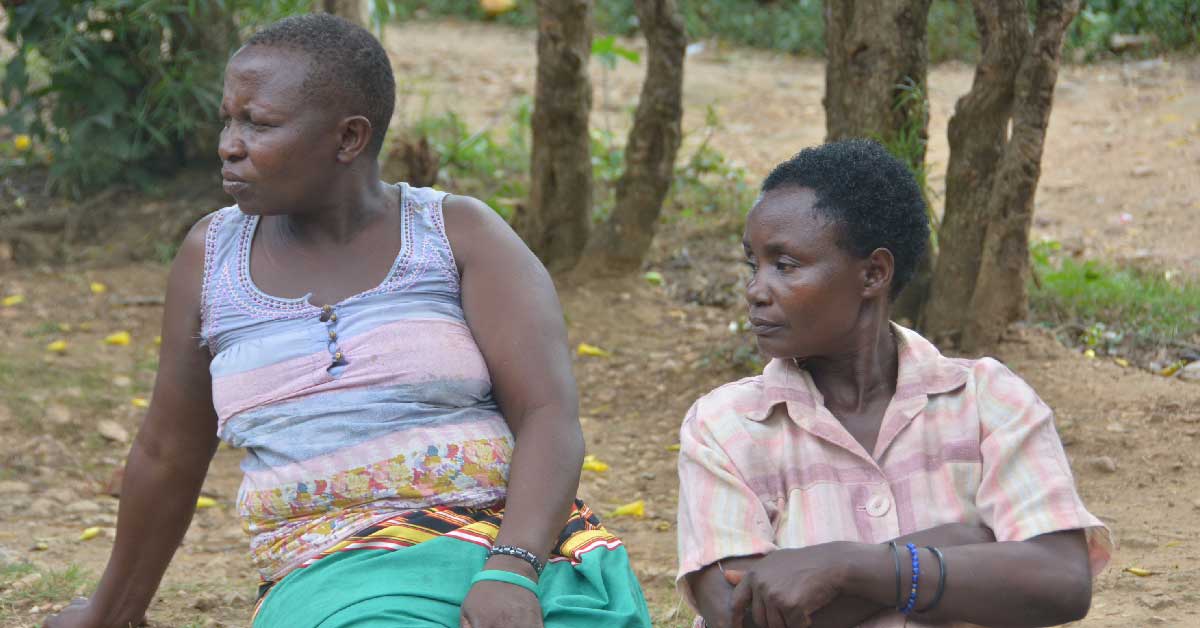 Women sit under a tree outside their home in Mbale, Uganda, Nov. 17, 2018. During the 2020 COVID-19 lockdown, some non-Catholic religious leaders urged women to use contraceptives, but the Catholic Church remains against it. (CNS photo/Tonny Onyulo)

By Tonny Onyulo – Agnes Muhozi, 43, sat on the ground waiting for her turn to receive oral contraceptive pills for the first time at Soroti Hospital in this eastern town. She contemplated whether it was a sin against God and humanity to use birth control.

“I don’t want to have more babies since I’m already struggling to take care of the kids I have right now,” said the mother of eight. “But I don’t want to go to hell because I’m aware of the church’s position on the use of birth control.”

Muhozi’s shift to use the pills came barely a month after religious leaders from different denominations joined nongovernmental organizations to urge women to embrace the use of contraceptives to avoid getting pregnant during the Covid-19 lockdown. The leaders said the need for family planning was more in demand as people were spending more time with their families and loved ones and seeking comfort to manage during the pandemic.

This creates a moral dilemma for many Catholic women like Muhozi. The Catholic Church prohibits use of artificial methods of contraception, and Catholic leaders in Uganda have opposed the birth control campaign. Roughly 39% of Uganda’s 42 million people are Catholic.

Muhozi’s husband lost his job as a chef due to the COVID-19 shutdown and has been trapped at home for a prolonged period. Muhozi is worried this could lead her to getting pregnant again since she has not been using contraceptives.

The situation has forced her to join many Catholics in Uganda and other African countries who have decided to disobey church teaching in this part of their lives, causing a substantial breach between laity and the church establishment.

“I know its sin to use birth control, but I have decided to try it since everyone is supporting it during Covid-19 lockdown. I don’t want to get pregnant. I have no money to feed a large family, especially during this period.”

Uganda has an average fertility rate of five children per woman. The rate of contraceptive use is 31%, while 19% of women 15 to 49 do not want to get pregnant but have no access to family planning, according to the 2016 Uganda Demographic and Health Survey.

On March 18, Ugandan President Yoweri Museveni banned movement across the country’s borders to help curb the spread of the virus. Schools, public transportation and public gatherings also were banned. The lockdown was partially lifted May 5.

Anglican Archbishop Stephen Kaziimba Mugalu told Catholic News Service he is advising “women to be careful and use contraceptives to avoid unwanted pregnancies since men are now staying home due to the lockdown and many have lost jobs.”

“I’m worried that the coronavirus situation will see many women getting pregnant and having kids they can’t take care of,” Archbishop Mugalu said. “Therefore, women should prepare or plan very well to avoid unwanted pregnancies during the nationwide shutdown.”

A catechist in one of the Catholic churches in eastern Uganda agreed with the push by non-Catholic religious leaders on the use of contraceptives, saying sex had increased among couples, women and men during the nationwide shutdown.

“Let us not live in denial, because the majority of Catholics are already using contraceptives but in secret,” she said. “This is one of the church teachings that people have disobeyed knowingly.”

However, the Catholic Church has warned other religious leaders against misleading its followers and reiterated that the use of contraceptives was immoral.

The Church Permits only Natural Methods

“We will not accept such teachings. They are immoral, unacceptable and against the will of God,” he told CNS. “The church only permits use of natural methods as birth control. No artificial use of contraception.”

He said couples who do not wish to have more children may take advantage of natural family planning.

Archbishop Cyprian Kizito Lwanga of Kampala said contraceptives expose women to long-term complications that could leave their reproductive health in ruins, and contraceptive use has taught many to dissociate the conjugal act from marital commitment and from procreation.

“Contraceptives women are taking have several negative effects on their health,” he said. “People should understand that children are gifts from God and the use of contraceptives can even kill very young embryos without them knowing that they have aborted.”

Meanwhile, Muhozi said she is leaving it to the Lord to lead her to the best path.

“God truly knows my situation at the moment,” she said. “My husband and I have no jobs so we can’t risk having more children. I also don’t want to deny my husband sex. It’s better I use contraceptives.”