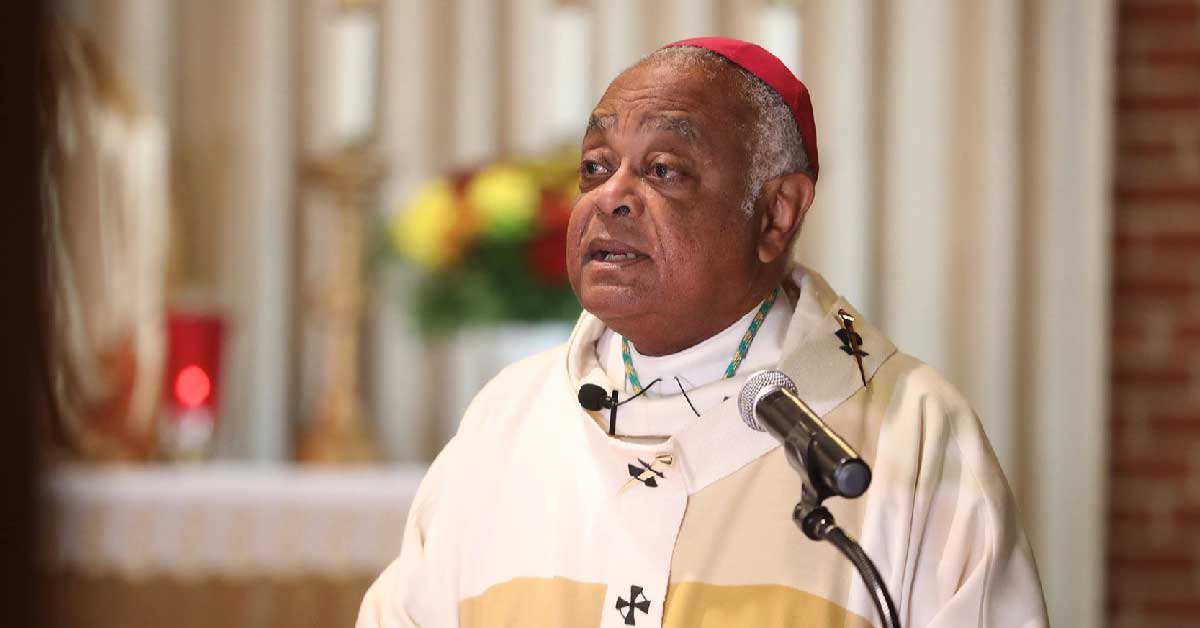 It also details, he said, church leaders’ “failures of competence, communications and culture.”

In a November 16 statement issued as the nation’s Catholic bishops gathered for their annual fall meeting – held online this year due to the coronavirus pandemic – Cardinal-designate Gregory said he felt “deep sorrow” for those victimised by McCarrick. They “should have been able to rely on the ministers of Christ’s church to protect and respect them,” he said.

He said the report, issued November 10, “demands to be viewed through the eyes of the survivors and their loved ones.”

“As has happened too often in recent history, it revealed to me and to you dark corners of our church of which I am deeply ashamed and profoundly angry — again, “Cardinal-designate Gregory said.

“It pushed into sunlight a culture that has too often served not to build up our cherished Catholic Church – Jesus Christ’s greatest gift to us – but to undermine it, far beyond the amoral ecclesiastical tenure of a single fallen cleric,” he added. “Those of us in leadership have too often failed to understand, to acknowledge, to respond to and to prevent the damage done to our innocent faithful – minors and adults.”

The Vatican’s 460-page report on McCarrick detailed how church leaders failed to believe and take action on allegations about sexual misconduct by McCarrick, who was named by St John Paul II to be archbishop of Washington, where he was installed in January 2001 and made a cardinal by the pontiff the next month.

Then-Cardinal McCarrick retired as Washington’s archbishop in 2006. In 2018, he resigned from the College of Cardinals after the Archdiocese of New York determined that allegations the prelate had abused a minor decades earlier were credible.

In 2019, Pope Francis dismissed him from the priesthood, after a Vatican investigation found he had sexually abused minors and engaged in sexual misconduct with adults.

In his November 16 statement, after he’d read the McCarrick report, Cardinal-designate Gregory didn’t mince words or hide his anger at what it revealed, decrying what he called the church’s mismanagement of a cleric, who while appearing “outwardly charming and gregarious,” was shown to be “a devious man” who victimised others.

“This report is about unconscionable human violation and the pain that too many people endured at the hands of a deceitful man who only pretended to want what was best for them in order to get what he wanted for himself,” Cardinal-designate Gregory said.

“Further,” he continued, “it is about leaders – Catholic leaders – who upon their ordination promised our heavenly Father that they would always put his precious people first; yet, through failures of competence, communication and culture, they seem to have completely mismanaged what they came to know about this devious man.”

Cardinal-designate Gregory said the McCarrick report seemed to indicate that people who initially communicated allegations about that churchman anonymously “must have feared retribution from the structures and persons that shielded him.”

“When harm is being done in the name of the holy Catholic Church,” he said, “one must never again feel constrained to come forward and speak out.”

Washington’s archbishop noted how “Pope Francis has already put into place procedures designed to uncover the truth in such cases of clerical and hierarchical wrongdoing.”

In May 2019, Pope Francis issued “Vos Estis Lux Mundi” (“You Are the Light of the World”), his document on promoting bishops’ accountability and setting out procedures for handling accusations of abuse against bishops.

Cardinal-designate Gregory said the report did not have any revelations of sexual abuse by McCarrick during that prelate’s tenure in Washington.

“While I am of course grateful for that, it provides little comfort,” said Cardinal-designate Gregory, Washington’s archbishop since 2019.

“I promise you with all my heart that our vigilance in the Archdiocese of Washington will continue – we will support the healing of those who have been harmed, our protocols for reporting and responding to these crimes will continue unabated,” he said, “and with renewed vigour, our safe environment efforts on behalf of those of every age will reflect the very best practices available.”

Since 1986, the Archdiocese of Washington has had a Child Protection Policy. It has been updated several times over the years, including in 2019 to mandate protections for adults against sexual harassment and abuses of power by those in authority.

The policy includes mandatory reporting of credible abuse allegations to civil authorities, criminal background checks for those who work or volunteer with youth, and age-appropriate educational programs for youth to safeguard them against abuse.

With the McCarrick report, Cardinal-designate Gregory said the church “has taken a step forward, albeit much delayed, in looking honestly at both this particular case and at the future of ecclesial accountability.”

The Catholic Church must continue to take meaningful steps to restore its integrity, he said, which “will require time and transparency, contrition and commitment, prayer and reconciliation, authenticity and humility.”

His statement concluded with the act of contrition Catholics recite during confession:

“Oh my God, I am heartily sorry for having offended Thee, and I detest all my sins because of Thy just punishments, but most of all because they offend Thee, my God, who art all good and deserving of all my love. I firmly resolve, with the help of Thy grace to sin no more and to avoid the near occasion of sin. Amen.”