Pope: Mary Shows How to Turn Fear Into Invitation to Hear God’s Call 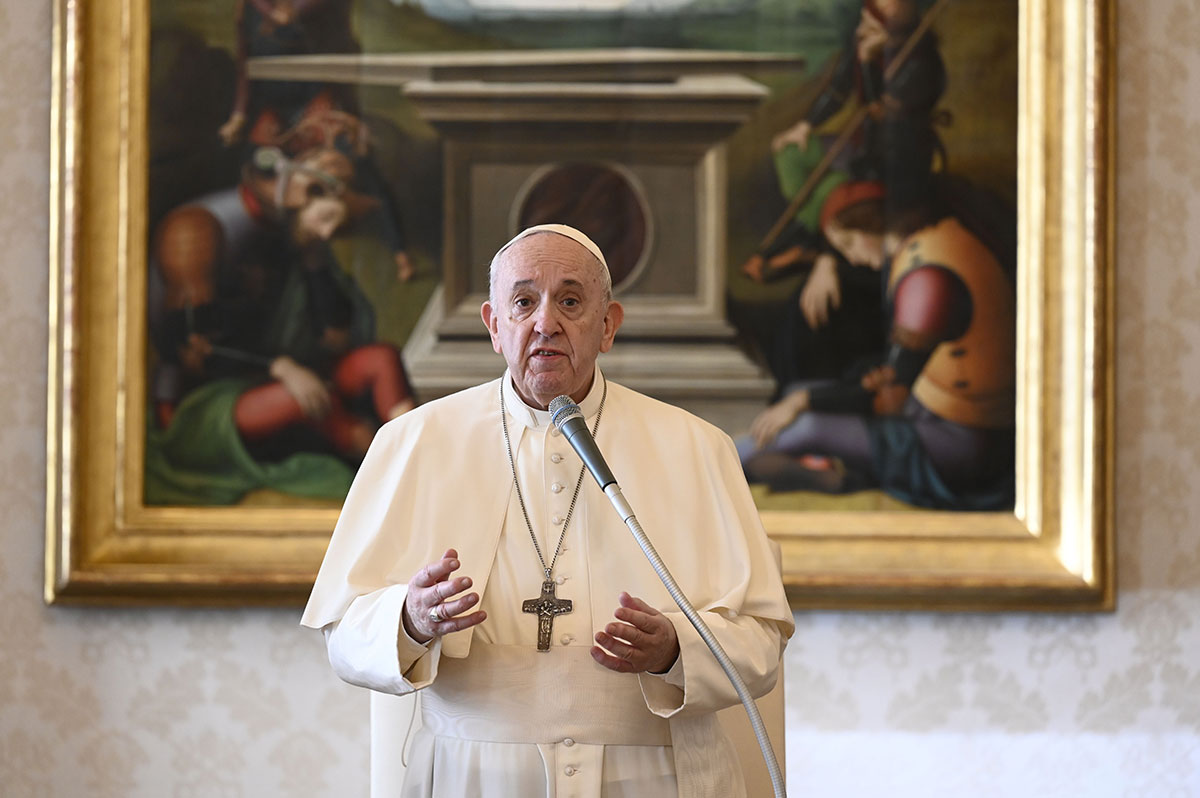 Pope Francis leads his general audience in the library of the Apostolic Palace at the Vatican November 18, 2020. (CNS photo/Vatican Media)

By Carol Glatz – There is no better way to pray than like Mary, who opened her heart to God with humility and trust, Pope Francis said.

“It is putting our life in the Lord’s hands, that he be the one who guides us. We can all pray like this, almost without words,” the pope said November 18 during his weekly general audience, which was livestreamed from the library of the Apostolic Palace.

Continuing his series of audience talks about prayer, Pope Francis reflected on Mary as a model of prayer.

Mary did not autonomously orchestrate her life, the pope said. “She waits for God to take the reins of her path and guide her where he wants.”

By being docile and willing to be God’s instrument, she prepares the way for “the great events in which God takes part in the world,” he said.

“There is no better way to pray than to place oneself like Mary in an attitude of openness with a heart open to God, ‘Lord, what you want, when you want and how you want,'” he said.

Those whose lives are inspired by such a prayerful attitude, he said, “do not get upset when their days are filled with problems,” but face reality knowing that if they offer themselves with humble love, “we become instruments of God’s grace.”

When the angel Gabriel told Mary of God’s plan for her, the pope said, Mary “knew how to reject fear, even while sensing that her ‘yes’ would bring her tremendously difficult trials. If in prayer we understand that each day given by God is a call, our hearts will then widen, and we will accept everything.”

Mary not only accompanied Jesus’s entire life in prayer, right up to his death and resurrection, she also accompanied the first steps of the church, praying with “the men and women whom her son had called to form his community,” Pope Francis said.

Her “natural feminine intuition is exalted by her most singular union with God in prayer,” the pope said. “This is why, reading the Gospel, we note that she seems to disappear at times, only to reappear for crucial moments: it was God’s voice that guided her heart and her steps where her presence was needed.”

Pope Francis concluded his catechesis recalling how Mary’s heart has been compared to “a pearl of incomparable splendour, formed and smoothed by patient acceptance of God’s will through the mysteries of Jesus meditated on in prayer.”

“How beautiful it would be if we, too, could be a bit like our Mother with a heart open to the Word of God, with a silent, obedient heart” that lets God’s word grow.