Pathological McCarrick Lied His Way Up the Church Ladder 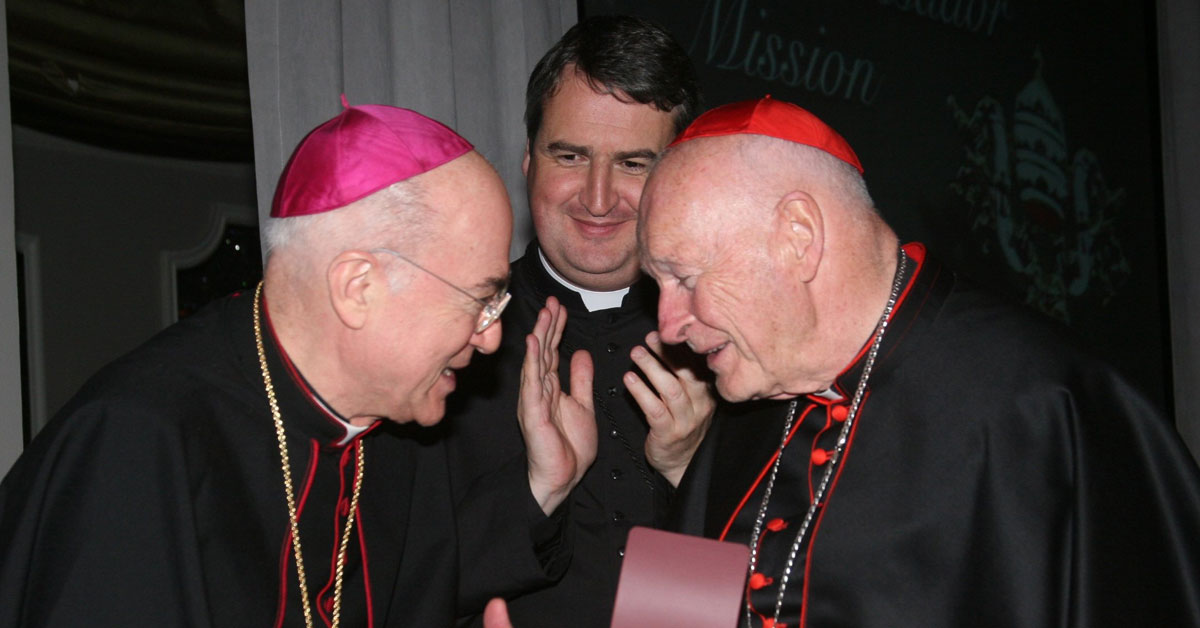 Archbishop Carlo Maria Vigano, nuncio to the United States, congratulates then-Cardinal Theodore E. McCarrick of Washington at a gala dinner sponsored by the Pontifical Missions Societies in New York in May 2012. Archbishop Vigano has since said Cardinal McCarrick already was under sanctions at that time, including being banned from travelling and giving lectures. Oblate Father Andrew Small, center, director of the societies, said Archbishop Vigano never tried to dissuade him from honouring the cardinal at the gala. (CNS photo/Michael Rogel, PMS)

A leading Catholic scholar has said that former cardinal Theodore McCarrick was able to deceive St John Paul II to secure his own promotion, despite allegations of sexual abuse and misconduct. The Vatican’s report on the career of McCarrick, published Tuesday, identifies accusations against McCarrick which were known at the time he was appointed Archbishop of Washington and named a cardinal.

George Weigel, Distinguished Senior Fellow of the Ethics and Public Policy Center and a biographer of St. John Paul II, told CNA that McCarrick was a “pathological personality,” and that his ability to lie to, and deceive those around him was a “hallmark” of his career and rise in the Church.

The Vatican’s McCarrick Report, more than 400 pages and released Nov. 10, includes details of accusations made against McCarrick over the course of several decades, beginning in the 1980s. The report noted that it was John Paul II, who served as pope from 1978 to 2005, who appointed McCarrick as bishop of Metuchen in 1981 and archbishop of Newark in 1986, based on his “background, skills, and achievements.”

The report said it was likely that John Paul II personally decided to appoint McCarrick to Washington, even after allegations against the American archbishop were shared with him in 1999, and after earlier allegations and concerns resulted in McCarrick’s disqualification from consideration to lead the archdioceses of Chicago and New York.

“Information regarding McCarrick’s conduct led to the conclusion that it would be imprudent to transfer him from Newark to another See on three occasions, namely Chicago (in 1997), New York (1999/2000 and, initially, Washington (July 2000),” the report said.

“However, Pope John Paul II seems to have changed his mind in August/September 2000, ultimately leading to his decision to appoint McCarrick to Washington in November 2000.”

The report offered a series of reasons as to why John Paul II may have changed his mind.

The first reason is that the pontiff received “inaccurate information” from several U.S. bishops familiar with McCarrick’s record. In fact, three bishops who had received multiple allegations against McCarrick or personally witnessed him sexually assaulting a young cleric told the Holy See in 2000 that they had no concerns about McCarrick’s suitability as a bishop, and no reason to suspect him of misconduct.

The report added that St. John Paul had known McCarrick since the mid-1970s, and that McCarrick’s denials were considered plausible by the pope.

“The report speaks of McCarrick’s own personal relationship with St. John Paul,” Weigel told CNA, “and certainly his ability to gain and abuse the trust of others is now known to be a hallmark of his method of operation.”

In 2000, shortly before his appointment to the Archdiocese of Washington, McCarrick wrote a letter to St. John Paul’s personal secretary, Bishop Stanislaw Dziwisz, denying several accusations brought to the pope’s attention over the years.

“Sure,” McCarrick wrote, “I have made mistakes and may have sometimes lacked in prudence, but in the seventy years of my life, I have never had sexual relations with any person, male or female, young or old, cleric or lay, nor have I ever abused another person or treated them with disrespect.”

McCarrick insisted he was happy to either remain in Newark, where he was then archbishop, or to resign, should the pope ask him to.

“McCarrick’s letter to then-Bishop Dziwsz, John Paul’s secretary, is a lie and a terrible example of his abuse of a relationship,” Weigel said.

The report also highlighted the former pope’s experiences as a bishop in Poland during the Soviet era, during which baseless accusations of sexual misconduct were used by Communist authorities to discredit the Church.

“Though there is no direct evidence, it appears likely from the information obtained that John Paul II’s past experience in Poland regarding the use of spurious allegations against bishops to degrade the standing of the Church played a role in his willingness to believe McCarrick’s denials,” the report said.

Weigel told CNA that both the pope’s previous experiences and McCarrick’s well-established ability to deceive those around him contributed to McCarrick’s ability to rise in the Church.

“St. John Paul II’s experience in Poland and with the USSR gave him more than a passing familiarity with the use of baseless slanders and slurs against priests and bishops as a tactic against the Church,” Weigel said.

“In the case of McCarrick, the simple fact is that pathological personalities lie and deceive people – even intelligent and saintly people – and that’s what McCarrick was able to do.”

St. John Paul II’s apparently personal decision to promote McCarrick and to disbelieve mounting allegations made against him – anonymous in some cases and from named accusers in others – raise questions about the legacy of St. John Paul.

Weigel told CNA that misjudgments by John Paul II need to be seen in the context of all the people McCarrick was able to deceive about his true nature, over a period of years.

“McCarrick lied to and fooled much of the U.S. episcopate,” said Weigel.

“It is the eternal paradox of the Church, one Christ speaks about in the Gospel, that her greatest saints and worst sinners CAN live and work side by side in the same field.”