Fighting abuse: What Pope Francis has done during his Pontificate 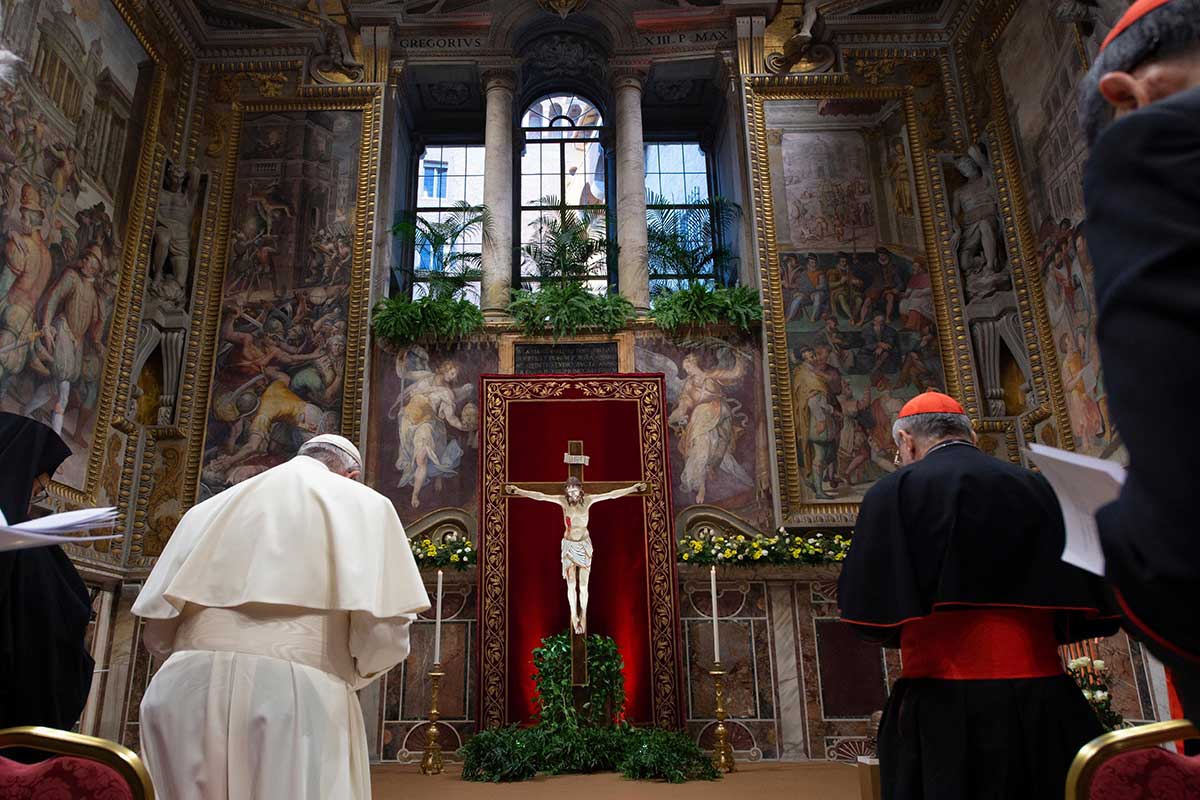 Pope Francis and church leaders from around the world attend a penitential liturgy during a meeting on the protection of minors in the church at the Vatican Feb. 23, 2019. Pope Francis has issued numerous new laws and guidelines for handling accusations of clerical sexual abuse and its cover-up by church officials. (CNS photo/Vatican Media)

By Carol Glatz – In more than seven years as leader of the Catholic Church, Pope Francis has issued numerous new laws and guidelines for handling accusations of clerical sexual abuse and its cover-up by church officials.

He also has insisted that church leaders must take the lead as true shepherds and guardians to protect the vulnerable out of love for the Gospel, truth and justice – not because of papal mandates or legal coercion. As such, tackling abuse and fostering healing require constant personal conversion, he has said.

The pope has also widened the scope of abuse to include not just sexual abuse but the abuse of power and of conscience and the corruption of authority when it is no longer lived as service but as the wielding of power.

Like his predecessor, Pope Benedict XVI, Pope Francis has tried to be a role model: meeting with survivors, launching investigations, dismissing negligent or abusive clerics and tightening loopholes with the aim of fulfilling what St John Paul II wrote in 2002, “there is no place in the priesthood and religious life for those who would harm the young.”

In a push for greater accountability, transparency and honesty, he has also shown what “mea culpa” looks like: admitting he made “serious mistakes” in his handling of clergy sexual abuse cases in Chile and expressing the “pain and shame” for the “crucified lives” of those who suffered abuse.

Pope Francis has shown that fighting abuse and protecting the vulnerable require both the sword of St Michael the Archangel and the silent and protective heart of St Joseph – two icons that prominently adorned St Peter’s Basilica during the 2018 Synod on young people.

While ignorance, complacency and denial remain primary accomplices in the crime of abuse, here are some of the significant measures and changes put forth by Pope Francis:

– He set up a task force of qualified experts and canon lawyers in February 2020 to help bishops’ conferences and religious orders draw up or revise guidelines for the protection of minors, especially in countries experiencing extreme hardship, conflict or a lack of resources. It came ahead of a handbook prepared by the Congregation for the Doctrine of the Faith clearly outlining leaders’ responsibilities and the procedures for handling allegations of abuse.

– In December 2019, he issued a number of amendments to a 2001 law; he waived the obligation of secrecy for those who report having been sexually abused by a priest and for those who testify in a church trial or process having to do with clerical sexual abuse.

Vatican officials are still obliged to maintain confidentiality but that does not prevent complying with civil laws, including mandatory reporting and following civil court orders.

Pope Francis changed the definition of “child” from a person under 14 years of age to a person under 18 regarding what qualifies as “child pornography.” He also spelled out the procedural norms for how the tribunal of the doctrinal congregation is to be composed and conducted.

– In May 2019, Pope Francis issued “Vos estis lux mundi” (“You are the light of the world”) for the universal church revising and clarifying norms and procedures for holding bishops and religious superiors accountable.

It requires all priests and religious to report suspected abuse or cover-ups and encourages any layperson to report through a now-mandated reporting “system” or office that must be set up in each diocese. It insists leaders will be held accountable not only for committing abuse themselves, but also for interfering with, covering up or failing to address abuse accusations of which they were aware.

It also established that bishops and religious superiors are accountable for protecting seminarians, novices and members of religious orders from violence and sexual abuse stemming from an abuse of power.

– Pope Francis approved a sweeping new law and set of clear safeguarding guidelines and procedures for Vatican City State and the Roman Curia in March 2019.

Beefing up existing criminal laws, it is mandatory to report quickly suspected or known abuse to the Vatican tribunal and it covers all forms of physical, sexual and emotional abuse as well as serious forms of mistreatment, neglect, abandonment and exploitation against minors and vulnerable adults. Any Vatican employee around the world can be tried by the Vatican court for violations.

– The pope made public in March 2019 his document, “Communis Vita” (Community Life), which amends canon law to include an almost automatic dismissal of religious who have been absent without authorization from their community and out of contact for at least 12 months.

– To drive home that abuse and safeguarding require immediate, concrete action by the entire church and not just the pope, Pope Francis convened a four-day summit in February 2019 for the presidents of the world’s bishops’ conferences, representatives of religious orders and heads of Vatican dicasteries.

By sharing experiences and best practices, the summit sought to inspire all church leaders to feel in solidarity with each other and above all with the victims, families and communities that have been wounded by the scandals and, therefore, to take urgent action.

– After mandating an investigation into allegations of abuse in the church in Chile and admitting to making “serious mistakes in the assessment and perception of the situation,” Pope Francis called the nation’s bishops to Rome in May 2018. He admonished them for “grave defects” in handling abuse cases and requested all the bishops offer their resignations. He also apologised to and met with victims.

– Pope Francis issued a motu proprio, “As a Loving Mother,” in 2016, expanding on canon law that allows for the removal of bishops and superiors for “grave reasons,” by including “negligence” in the exercise of one’s office, in particular in regards to the sexual abuse of minors, where even “the lack of diligence” is considered to be grave enough for potential dismissal.

This, together with “Vos estis lux mundi” of 2019, the two documents are meant to correct what had been a lack of or unclear procedures for investigating the way a bishop or religious superior complies with norms and clearly expresses the consequences of noncompliance or cover-ups.

– The pope sent a letter in February 2015 to the president of every bishops’ conference and religious superior ordering them to have safeguarding guidelines in place for handling cases of sexual abuse as called for in a 2011 letter from the Congregation for the Doctrine of the Faith.

He said it was each leader’s responsibility to verify and assure the safety of minors and vulnerable adults in parishes and church institutions as well as to listen to and care for survivors.

– In November 2014, Pope Francis established a new board within the doctrinal congregation to review and speed up the process of hearing and ruling on appeals filed by priests laicised or otherwise disciplined in sexual abuse or other serious cases.

– The pope had his first meeting with survivors of abuse by clergy in July 2014. He celebrated Mass and met privately with six men and women at the Vatican. He repeated calls for zero tolerance and accountability for the “despicable” crime of abuse and underlined the need for ongoing vigilance in priestly formation and for better policies, procedures and training on how to implement existing norms.

– The pope formally established the Pontifical Commission for the Protection of Minors in March 2014. The body of experts, with input from survivors, is meant to make proposals and spearhead initiatives to improve safeguarding norms and procedures. It remains an advisory body for the pope and it offers concrete assistance to every level of the church worldwide.

Vatican: Days of Covering up Abuse Allegations are Over
Share