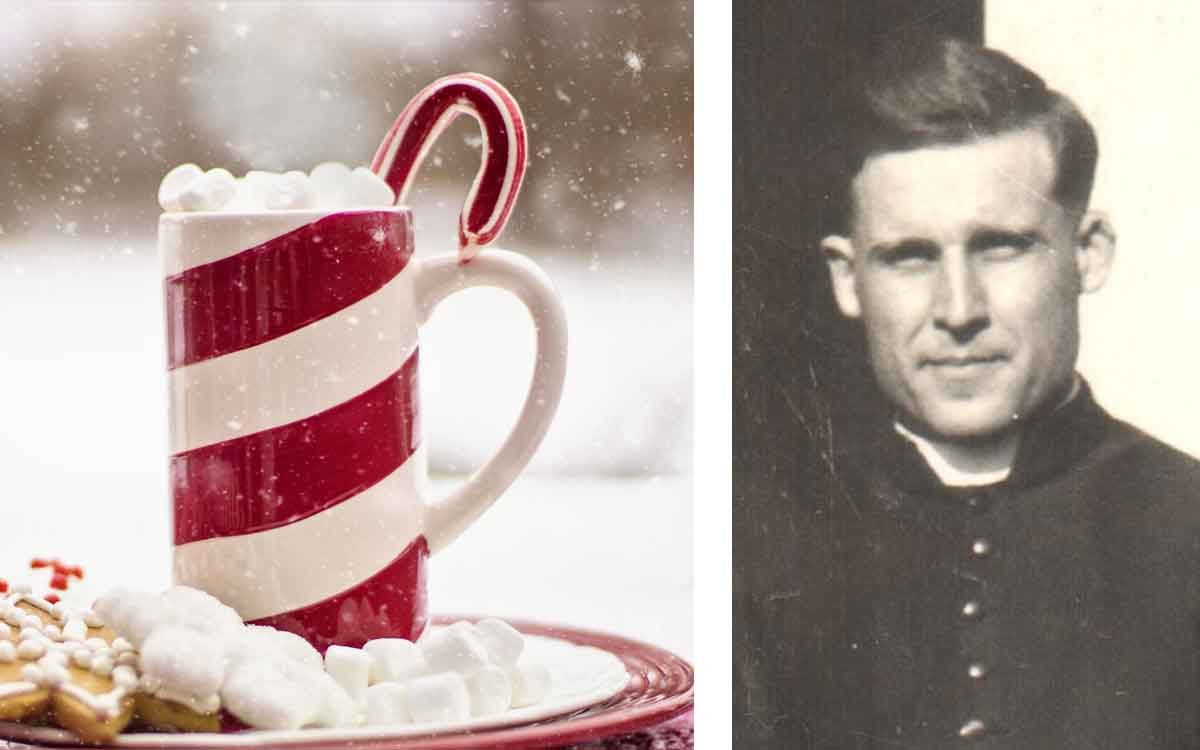 Fr Gregory Keller, seen here around 1924, served as a parish priest while inventing machines for his brother-in-law’s sweets company in Georgia. Fr Keller had a hand in creating the candy cane, a treat that is especially popular at Christmastime. (Photo: Diocese of Little Rock Archives)

A sweet that has become symbolic of Christmas treats owes its mass-produced existence to a Catholic priest who once kicked Elvis Presley out of his church hall, as Malea Hargett explains.

A Catholic priest had a hand in creating the striped candy canes that people around the world know and love this time of year.

History of the Candy Cane

The history of the candy cane is a little murky. Legend has it that the treat started as plain white sugar sticks, maybe in the 1600s, according to a 2015 National Geographic blog.

“The stick got its cane-like hook, one unsubstantiated story claims, when a 17th-century choirmaster at Germany’s Cologne cathedral convinced a local candy maker to bend sugar sticks into the shape of shepherd’s crooks, to amuse bored and restless children during Christmas Mass,” the blog reported.

Some say the hook was added to make it easier to hang on Christmas trees.

By the 16th century Europeans were decorating trees with candles. Trees also were decorated with fruit, nuts, candies, cookies and paper cones.

The candy cane was transformed when the idea arose to add peppermint with sugar to make peppermint candy. The iconic red and white stripes came later.

In the United States, handmade white (not yet striped) candy canes were first recorded in 1847. In 1919 Bob McCormack started the McCormack’s Famous Candy Co. in Albany, Georgia, and started selling candy canes.

The company, later known as Bobs Candies, was known as the largest manufacturer of striped candy in the world.

The candy cane-shaping process was labour intensive because it was done by hand, until Mr McCormack’s brother-in-law, Fr Gregory Keller, stepped in to make the process faster and more efficient.

When Fr Keller invented one machine to twist the soft candy into spirals and cut the stick candy in 1952, and another machine to put the crook in the candy cane in 1957, sales took off. His invention became known as the Keller Machine.

Around the same time as the candy company was started, Fr Keller, from Little Rock in Arkansas, was studying for the priesthood at the Pontifical North American College in Rome. He was ordained by Cardinal Basilio Pompilj in the basilica of St John Lateran on March 17, 1919, soon after the end of World War I.

After teaching for four years at St John Seminary in Little Rock, he had assignments as an associate pastor or pastor.

The priest is infamous (or notorious) for kicking a young Elvis Presley out of St Mary church there after a show for the Catholic Club in 1955. The performer was allegedly signing the thigh of one of his young fans. Presley had performed there at least three other times in 1954 and 1955.

According to a 1960 article in The Guardian (now known as Arkansas Catholic) about his retirement, one of his hobbies was creating machines.

He had patents on machines to decorate candy, package salted peanuts, and process peanut butter cracker sandwiches. The article mentioned that he was still waiting for his patent on the Keller Machine being used by the McCormack company.

The Keller Machine was such a hit that Fr Keller also gained national attention in 1974 as a contestant on the TV show What’s My Line?, a quiz show on which contestants had to guess the guest’s profession or claim to fame.

In 1970, he received another patent on his “stick assortment gathering machine” to assist with filling an assorted box or jar of various flavours or colours of stick candy.

The royalties he received from his inventions were donated to charities.—CNS