Jupiter and Saturn to Put on ‘Christmas Star’ Show 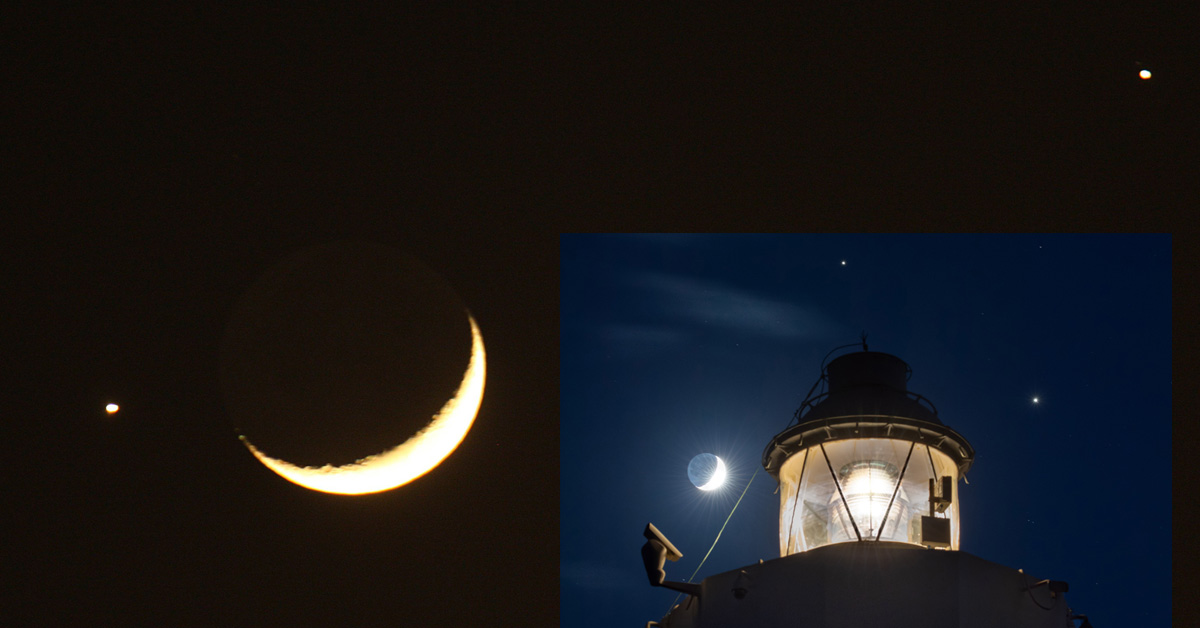 A crescent moon is seen below the planets Jupiter, left, and Venus in the sky over Amman, Jordan, Dec. 1, 2008. Astronomers and sky gazers across the world will be keeping watch at sunset Dec. 21, 2020, in every time zone for a similar and rare astronomical phenomenon as two of the brightest naked-eye planets, Saturn and Jupiter, create an event known as “Planetary Conjunction.” (CNS photo/Ali Jarekji, Reuters). Inset: Saturn is seen shining above the Cape Murro di Porco Lighthouse in Syracuse, Sicily, and Jupiter is seen shining to the right, in this photo taken in November 2020. The two largest planets in the solar system will pass so close together in Earth’s sky that the moon will easily be able to cover them both simultaneously Dec. 21. This pending planetary passage will be the closest since 1623. (CNS photo/Kevin Saragozza, courtesy NASA)

By Dennis Sadowski  – A once-every-two-decade conjunction involving the solar system’s two gas giants will give earthbound observers a look at a so-called “Christmas Star” on the winter solstice.

Come sunset December 21 in any time zone around the world, Jupiter and Saturn seemingly will merge into a single bright point of light low in the western sky.

The Great Conjunction of 2020 will yield an expected spectacular astronomical sight involving the two planets unseen in nearly eight centuries.

The two planets have been approaching conjunction – a point when planets or other bodies as seen from earth are near each other in the night sky – all year. That the conjunction is occurring near Christmas Day has given rise to talk about the Star of Bethlehem that the Gospel of Matthew describes in his telling of the birth of Jesus.

But the description of the star “is a very minor part of the infancy narrative,” Jesuit Brother Guy Consolmagno, director of the Vatican Observatory, told Catholic News Service. “It’s so unimportant that Luke doesn’t talk about it and yet it has captured our imagination.”

It’s what the star represents – the birth of Jesus – that is the real story, Brother Consolmagno said.

Theories abound about the Star of Bethlehem, he explained, citing the millions of hits about the topic on the internet and the 400 book titles referencing it that are available at online stores.

“To me, asking ‘What was the star?’ is a lot of fun, but not particularly significant either astronomically or theologically. Nothing’s really at stake if it turns to be this explanation or that explanation,” Brother Consolmagno said.

Ideas about the Star of Bethlehem range from the natural – a great conjunction of Saturn and Jupiter near the time of Jesus’ birth or a comet – to the supernatural as a sign from God.

Or it could have been a metaphor used by St Matthew “to show how important Jesus’ birth was to humanity,” said Father James Kurzynski, pastor of St. Olaf Parish in Eau Claire, Wisconsin, and an amateur astronomer.

“We need to remember that the Star of Bethlehem could have had different meanings for the people that Matthew was writing to,” Father Kurzynski explained. “Was it a supernatural event? Was it an event to signal somehow, some way that there was something that was happening in the world that was signalling the birth of a king that was not just a human being, but that there was something different about this king?”

He suggested that Matthew may have even meant that Jesus’ birth was the “great light” bringing people out of the darkness in which they walked, as told in the Book of Isaiah.

Father Kurzynski said the conjunction can be as inspirational as what the Catholic Church calls a sacramental such as a saint’s relic, a blessed medal, or rosary.

“Whether this conjunction is a Star of Bethlehem candidate or not,” the priest told CNS, “that night (December 21) can be a sacramental that people look up to and ask ‘What was it like when Christ was born?’ To me this is an opportunity for people to get out that night and meditate on what it may have been like when Christ was born. What does the birth of Christ mean to me?”

Whatever the Star of Bethlehem, Father Kurzynski and Brother Consolmagno said the upcoming astronomical event can allow people time to step outside to observe the beauty of creation and to realize that God is greater than any planetary dance, especially as the world continues to battle the coronavirus pandemic, confront political divisiveness and experience social ills.

The conjunction will see bright white Jupiter and fainter yellowish Saturn separated by 0,1 degree, about one-fifth the diameter of a full moon. Binoculars will reveal the slim separation, but to the unaided eye, the planets will appear to converge.

In reality, Saturn will be twice as far from Earth as Jupiter will be. The close alignment occurs as Jupiter laps Saturn as they orbit the sun.

The hulking orbs appear in conjunction about every 19.8 years, but not every close alignment is as near as this one. The last occurred May 28, 2000, but was nearly impossible to see because the two planets were in the sun’s glare in the early morning sky.

The last time Saturn and Jupiter appeared this close was July 16, 1623, but again it was highly unlikely that it was seen because of it occurred near the sun at sunset. The last easily visible super conjunction with such an apparent minimal separation was March 4, 1226.

Brother Consolmagno will discuss the conjunction and the Star of Bethlehem four times in online presentations between now and December 22. One is for the British Broadcasting Corporation’s Sky at Night magazine at 2 p.m. Eastern, December 17. Tickets cost 10 euros ($12.25). To register, go to skyatnightmagazine.com/virtual lecture.

The Jesuit astronomer encouraged people to take the time to look at the night sky any time.