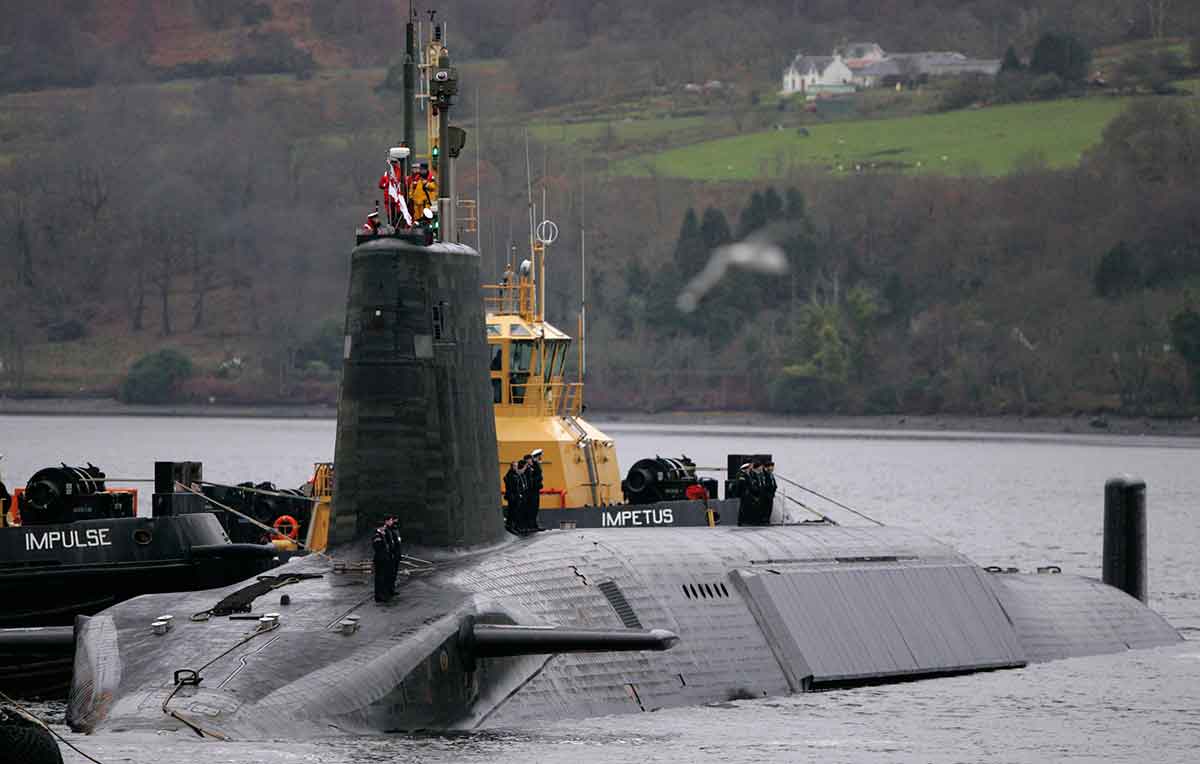 Crew members from the HMS Vengeance, a British Royal Navy Trident ballistic missile submarine, stand on their vessel as they return to the Faslane naval base near Glasgow, Scotland, in this file photo. Bishops of England, Wales and Scotland have issued a joint statement calling upon the U.K. government to scrap the country’s nuclear weapons. (CNS photo/David Moir, Reuters)

By Simon Caldwell  – The UK should “forsake” its nuclear arsenal and spend the money it saves on helping the poorest people of society, Catholic bishops said.

In a  statement, Scottish and English bishops said the UN Treaty on the Prohibition of Nuclear Weapons offered an opportunity to build peace through dialogue rather than the threat of mutual destruction.

They said that the treaty, which was signed by 122 countries in 2017 and will come into legal force Jan. 22, was a “historic milestone on the path to nuclear disarmament.”

The treaty creates a legally binding instrument for the prohibition of nuclear weapons with a view to their total eradication.

Britain has not signed the treaty. Other countries with nuclear arsenals – Russia, the U.S., China, France, Israel, India, North Korea and Pakistan — also have not signed.

The bishops said in their joint statement that the treaty could serve to help countries “refocus on genuine peacebuilding rooted in dialogue, justice, respect for human dignity, and care for our planet.”

“We urge support for the treaty and repeat our call for the U.K. to forsake its nuclear arsenal,” said the statement signed by Bishop Declan Lang of Clifton, chair of the International Affairs Department of the Bishops’ Conference of England and Wales; Bishop William Nolan of Galloway, representing the Commission for Justice and Peace of the Bishops’ Conference of Scotland; and Auxiliary Bishop William Kenney of Birmingham.

“The resources spent on manufacturing, maintaining and upgrading these weapons of mass destruction should be reinvested to alleviate the suffering of the poorest and most vulnerable members of our society, for the common good of all peoples,” the statement said.

“At the same time, we implore the government to strengthen its arms control regulations, tackling the manufacture and sale of other weaponry, which continues to destroy so many lives throughout the world,” the bishops added.

The U.K.’s nuclear arsenal is limited to the Trident warheads carried on four Vanguard-class strategic nuclear submarines based at Faslane Bay on Gare Loch in the west of Scotland.

One of the submarines is always at sea, ensuring that the U.K. has the capability of firing a nuclear missile at any time.

In 2016, despite objections from the Catholic Church, politicians in London voted to replace the fleet with Dreadnought class submarines, which will come into service in 2028.