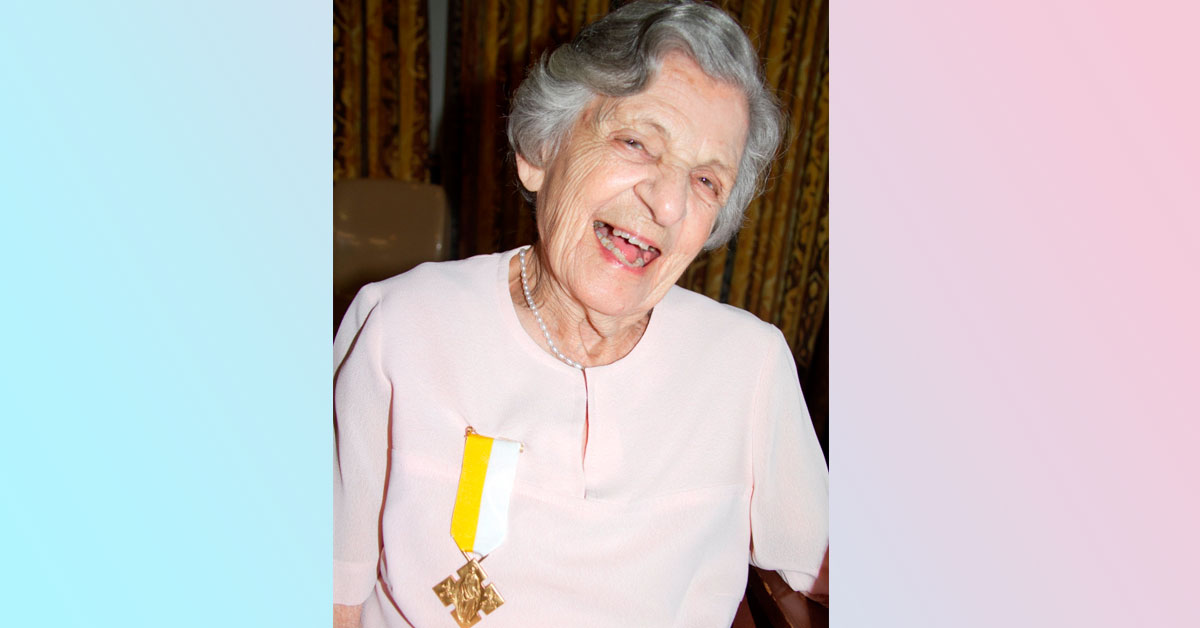 Durban centenarian and devoted Catholic, Isabel Akal, has died, just a few months short of her 107th birthday. Mrs Akal passed away peacefully at her Durban North home on 4 January, with three of her children at her side.

On her 100th birthday in 2014, Mrs Akal received a Papal award for her long and exceptional service to the Catholic Church. When presented with the Bene Merenti Medal, she said, “why me, I didn’t feel worthy of it.”

Mrs Akal attended mass daily until her 94th birthday, when she decided to stop driving. She would also spend several hours in prayer daily, and her rosary was always within reach.

Mrs Akal was born in Johannesburg on 26 March 1914 and grew up in Barberton in what is now Mpumalanga. She was the fourth of seven children and is fondly known as the Barberton Daisy. Mrs Akal would make the long walk to mass every day, crossing a donga to get to the church, which was a small tin structure.

Along with her four sisters, Mrs Akal attended boarding school at the Dominican Convent in Ermelo. This education laid the foundation for her deep spirituality.

Mrs Akal moved to Durban in 1938 after marrying her husband, George. Their home became known as a halfway house for priests and a shelter for those in need. With a constant stream of clergy passing through, Mrs Akal’s eldest daughter, Marcelle, recalls how she and her siblings were given the strict instruction, “FHB” (family holds back) to ensure there was enough food for their many visitors.

Mrs Akal was also a member of several church organisations at the old St Joseph’s church in Durban.

Until recently, her mind remained sharp, always asking about family members by name, and never forgetting a birthday or anniversary.

When asked about her recipe for longevity, Mrs Akal said she was not a big eater and didn’t drink alcohol, but did not hold back when it came to tea and sugar, often drinking five cups a day, sweetened with three heaped spoons of sugar. She never followed a diet, and cooked with butter, full cream milk and olive oil. She also enjoyed the odd chocolate and peppermint.

Mrs Akal said the real secret to a long and full life was to have a very happy family and community-oriented childhood.

A few days before her death, Mrs Akal asked to receive the Eucharist. At that stage, Mrs Akal had stopped eating, and her last communion was also her last meal.

Her funeral service was held on Friday 8 January at Our Lady of Fatima Parish in Durban North, her spiritual home for 50 years. The service was celebrated by current and former parish priests at Our Lady of Fatima, Father Justin Stirton and Father Desmond Nair, as well as long-time friend, Monsignor Paul Nadal. Due to Covid restrictions, attendance was limited, and a requiem mass was not possible, but the family is planning a mass in celebration of Mrs Akal’s life once it is safe and possible to do so.