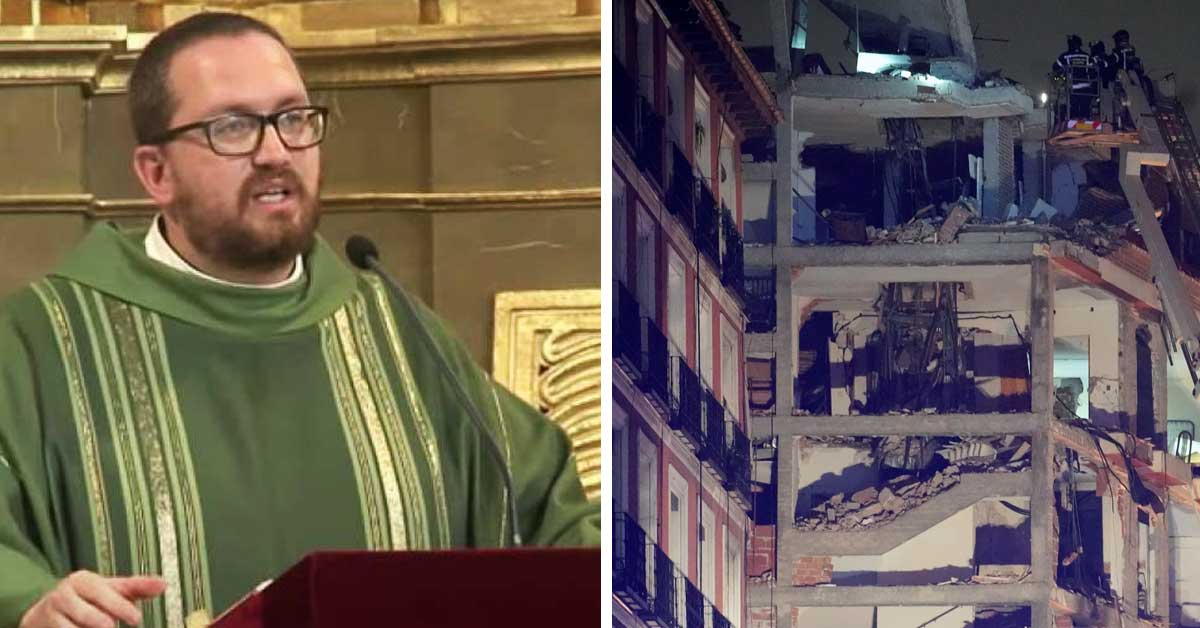 Firefighters work after a deadly explosion at the parish centre of the Church of Our Lady of La Paloma in downtown Madrid Jan. 20, 2021. A priest and a member of the parish were among four killed in the explosion, which was caused by a gas leak. (CNS photo/Juan Medina, Reuters). Father Ruben Perez Ayala (CNA)

By Junno Arocho Esteves  –  A young priest ordained only six months ago was among the casualties of an explosion at a parish centre in Madrid.

The Archdiocese of Madrid confirmed that Father Ruben Perez Ayala, a priest at the Church of Our Lady of La Paloma, died in the early hours of the morning on Jan 20 due to internal haemorrhaging he suffered after the blast.

The archdiocese also shared an interview Father Perez shortly gave before his priestly ordination in June, in which he said that his experience at the seminary taught him that “happiness is not in living for oneself, but in giving oneself to others.”

According to the Spanish newspaper El Pais, Father Perez’s death brought the death toll from the explosion to four.

David Santos Munoz, 35, an electrician, died in the Jan. 20 explosion after he was called in to inspect the boiler room because of a strong smell of gas. Munoz, a married father of four, was an active member of the parish.

Cardinal Carlos Osoro Sierra of Madrid, who rushed to the parish shortly after the explosion, mourned the death of Father Perez in a message on his Twitter account.

“The young priest Ruben Perez Ayala, who I ordained just six months ago, died this evening,” the cardinal tweeted. “I am grateful for his life of dedication to Christ and his church. I pray for his family. I also pray for those who died after the explosion at La Paloma and for all those affected.”

According to the archdiocese, the parish centre housed the priests’ apartments, as well as parish and local Caritas offices.

In a WhatsApp message to Catholic News Service Jan. 21, Father Gabriel Benedicto, pastor of Our Lady of La Paloma, said, “I am well. It’s been a long day, but God helps us.”

The pope “raises prayers to the Lord and commends to his mercy especially the eternal rest of the victims, as well as the injured and their families,” Cardinal Parolin wrote.

“We send our condolences and affection to the families of the dead and the wounded,” he tweeted.

Martinez-Almeida, who frequently updated reports about the explosion on his Twitter account, also expressed condolences to the victims’ families.

“No matter what happens, the people of Madrid are always there to help no matter how difficult the circumstances,” he tweeted.