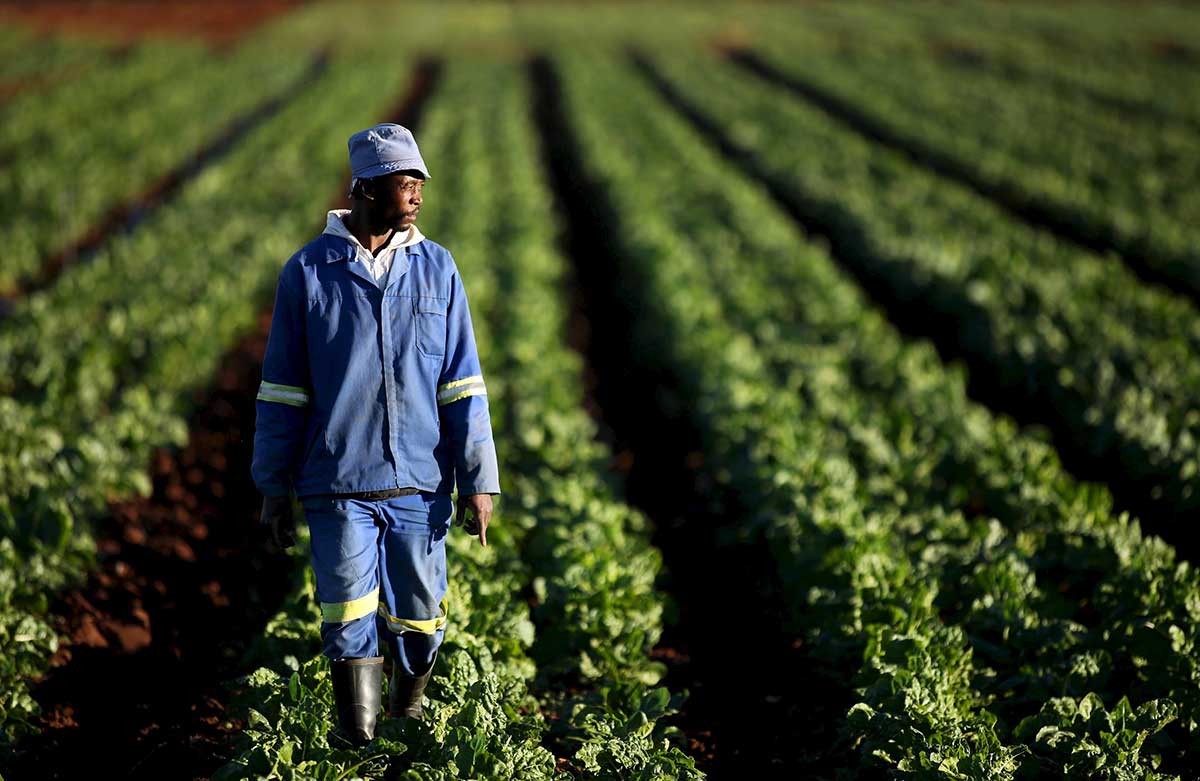 A farm worker walks between rows of vegetables on a farm near Johannesburg, South Africa, in this file photo. An African faiths environmental institute is calling on the Bill and Melinda Gates Foundation to stop funding green revolution technologies and genetically modified seeds for the continent, but instead support natural methods to help Africa achieve food sufficiency and protect its environments. (CNS photo/Siphiwe Sibeko, Reuters)

By Fredrick Nzwili – An African faiths environmental institute is calling on the Bill and Melinda Gates Foundation to stop funding green revolution technologies and genetically modified seeds for the continent, but instead support natural methods to help Africa achieve food sufficiency and protect its environments.

In an open online letter that is also asking for signatures, the Southern Africa Faith Communities’ Environment Institute said the foundation is fueling hunger and poverty by funding farming methods that fail to protect small-scale farmers and the environment.

The Gates Foundation said it is working to ensure that small-scale African farmers can lift themselves out of poverty.

“This is a bold and strong call that is in line with Catholic social teaching principles of solidarity, preferential option for the poor and care for our common home,” Allen Ottaro, founder and executive director of the Catholic Youth Network for Environmental Sustainability in Africa, told Catholic News Service in a reaction to the petition. “It is in solidarity with the African smallholder farmers who are at risk of losing sovereignty over their food production in the long term, as well as the loss of a variety of food crops that are rich in nutrition.”

The faith communities’ institute said the Gates Foundation has been funding projects that promote growing of one specific type of crop in large fields at the expense of mixed cropping, a practice used by small-scale farmers in Africa for many years.

Also, the institute said, in the growing of the single crop, the projects use heavy machinery, large amounts of fossil fuels, commercial fertilizers and pesticides in the approaches deemed to destroy the environment. At the same time, large tracks of land are acquired for the crop, leaving many ordinary farmers without farming lands. The actions disrupt the people’s ability to cope with food-related challenges and the environment to withstand climatic changes.

“We urge the Gates Foundation to stop pushing a green ‘revolution’ that imposes technologies and seeds that are controlled by companies with vested interests. Rather, it should be looking at and learning from small-scale farmers from around the world who are working to build alternative food systems that are socially just and ecologically sustainable,” said the faith communities institute, which includes some Catholic organisations.

Prince Papa, the programme coordinator of the Global Catholic Climate Movement in Africa, said ventures in agriculture, technology or the entire economy should have creation at the centre of their desired outcomes.

“Resources should also be concentrated in the hands of small-scale holders and the least in the community. This does not mean that profits alone are ‘bad,’ but that a reassessment should be made where new information comes in, to reevaluate the driving force behind the development,” Papa said in a response to the letter.

At the same time, Ottaro said Africa is one of the continents most vulnerable to the climate crisis. He said while its rich biodiversity can help absorb climate-related shocks, industrial-scale agriculture was chipping away this cushion. The weakens the resilience of local economies and food supply chains, as seen from the pandemic.

“The threats to biodiversity and land degradation” as a result of large-scale farming are concerning “not just for the present but also future generations,” said Ottaro, while stressing that highly centralized food-supply systems can be vulnerable to disruptions, and price increases often impact the poor most.

He cited recent border disruptions in East Africa where Kenya, Uganda and Tanzania demanded COVID-19 testing or certificates of tests from drivers and crews, resulting in delaying delivery of food commodities. This led to an increase in the prices of certain foods, such as fresh fruits and vegetables.

In a response to the institute’s letter, which was to be published officially Feb. 23, the Gates Foundation said that, through its agricultural development initiative, it works to ensure smallholder farmers have access to a wide range of resources and innovations they need to improve their livelihoods and lift themselves and their families out of poverty.

“We do this by working with partners to help make smallholder crops and livestock more productive, to improve nutrition and to empower women farmers,” said a short statement from the foundation sent to Catholic News Service. “Our work is guided by what smallholder farmers and local agriculture businesses say they need to succeed and by the priorities their governments have embraced in their national agriculture investment plans.”

The foundation said it believed there are many paths to achieving sustainable food production.

“African farmers, like farmers everywhere, should be empowered to choose from a range of innovations that can help them adapt to stressful conditions like high temperatures, droughts, floods, pests and diseases, which continue to intensify due to climate change,” the foundation said.

Bishop: Only the Heart Propels us to Action

Pope: Each one of us is called to be an Artisan of Peace