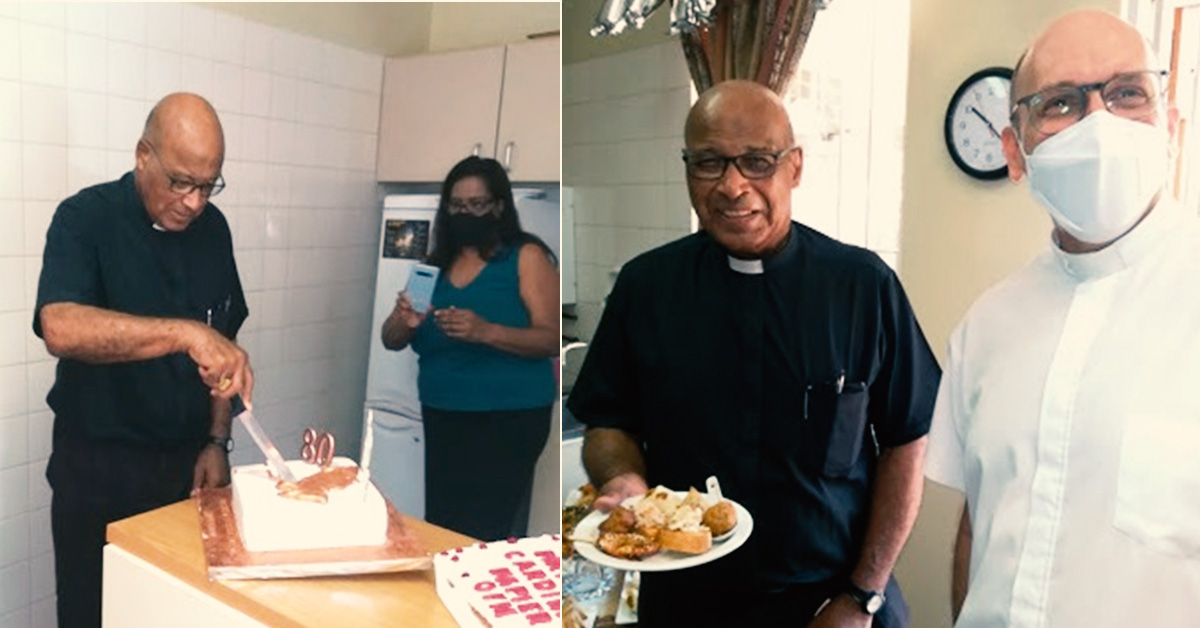 Cardinal Napier celebrated his 80th birthday on  8 March 2021 in Durban.

By Dawn Haynes – This was very different from his 75th birthday which was a day-long celebration with hundreds of people joining in the song and dance party/concert at Holy Family College!

This time he had a quiet tea with the staff of the Durban Chancery, sitting outside and keeping safe distances. A beautiful (and delicious) cake was cut and the staff sang “Happy Birthday” led by Fr Brett Williams. Fortunately, it was a typical hot Durban morning! So, being outdoors was just great!

Of a family of 2 sisters and 4 brothers, Cardinal Napier was born in 1941 in Matatiele, where he began school in 1948 at Holy Cross Primary, but transferred to Little Flower High school in Ixopo for Std 6 in 1955, where he matriculated in 1959.

He has recently celebrated his Golden Jubilee of ordination into the priesthood – an even quieter celebration during lockdown level 5. He has been Archbishop of the Durban diocese since 1992 and was created Cardinal by Pope John-Paul II in February 2001.

It is usual for a Bishop to retire from active episcopal ministry at 75yrs and a Cardinal from Vatican offices at 80yrs, but the immediate future for Cardinal Napier is unsure for two reasons. First the sad death from Covid-19 of Archbishop Abel Gabaza who was set to succeed him this year, and second his appointment as Apostolic Administrator of the Diocese of Eshowe. Now the Cardinal remains at the head of the Durban Archdiocese until a successor is appointed.

Cardinal Napier is greatly admired for his vast knowledge and expertise in church leadership. He is a true “servant-leader”. He listens carefully and always makes time to deal with matters needing his attention. He is fit, healthy and prepared to remain in Durban as long as his services are required.

We are truly blessed to have such a dedicated and experienced Archbishop in Durban.