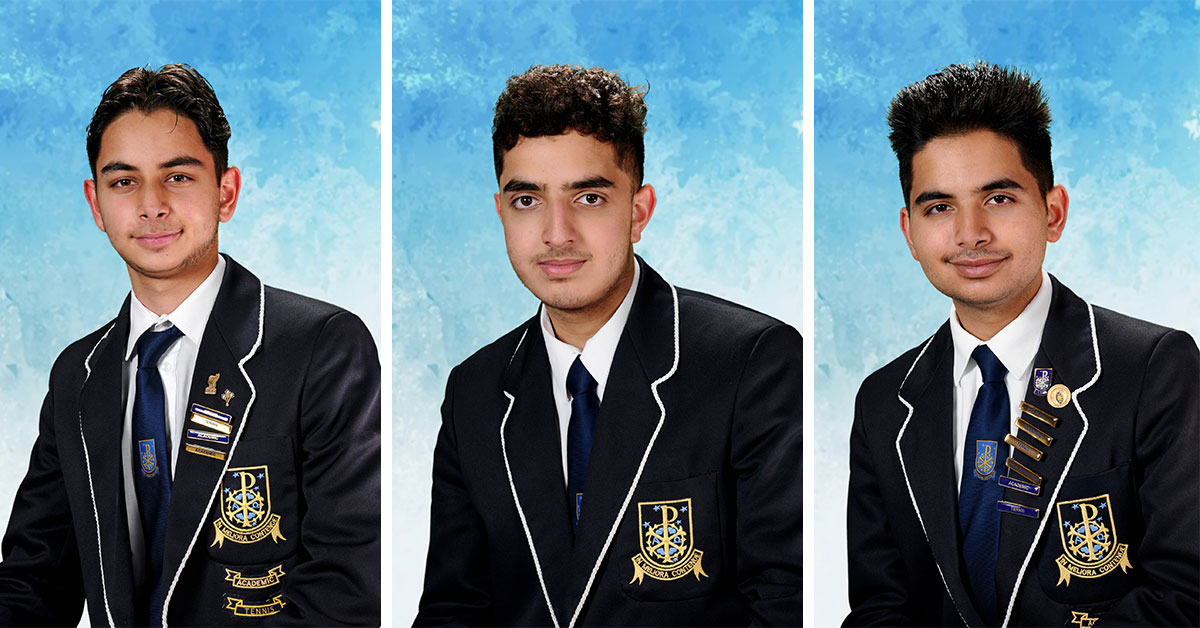 2020’s matriculants had an unprecedented year.

At Sacred Heart College, we dealt with the same bizarreness that the rest of the world had to experience, but we also dealt with happier oddities and eccentricities.

We are particularly proud of Zameer Dada, who achieved distinctions in 8 out of 8 subjects. But that’s not where the full marks end: the star student also achieved 100% for Mathematics. For Zameer, hindsight is 20/20!

Zameer says he is surprised, himself, at the 100% result, because Maths is the sort of subject where one could make rushed errors under pressure. He says his hardest paper was English Paper 1. Zameer is hoping to study medicine and is waiting to hear where he may be accepted, having applied to universities in Johannesburg, Bloemfontein, Polokwane and Cape Town.

Zameer comes from a doctor-heavy family, with his mother, all four of her siblings, two grandfathers, and others, all being medical doctors. As a chartered accountant, Zameer’s father is an outlier in the Dada family.

Zameer says he’s considering specialising in radiology or one of the branches of surgery. Because he is also passionate about IT, he’s intrigued by the possibilities the fourth industrial revolution, particularly machine learning, big data and artificial intelligence, will bring to the field of radiology. He’s even been learning Javascript since December so that he can start building apps.

Fortunately for the SHC family, we have not seen the last of the Dadas. Zameer is the eldest of five children, with Faeez (Grade 11), Yaseen Grade 6) and Naeem (Grade 3) remaining at Sacred Heart College and little Aliyah in Grade 1 at Kingsmead College. Dad Ashraf serves on the SHC Board.

Zameer says his unusual Matric year is one he will never forget.

Twins Tahir and Bilal Tayob, who come in at numbers 3 and 4 on the SHC top- achievers list, got a twinly 7 distinctions each. How did they manage that – have they always done the same-same thing? The brothers laugh and dismiss the idea of twin ESP between them. Because they have three older siblings, they say, they never particularly felt like twins. They just always had a house full of people since they were born. In any case, adds Tahir, Bilal took 8 subjects and is more scientifically minded, whereas Tahir, with a humanities bent, took 9 subjects. “I missed a distinction for Physics by 1%,” Tahir notes with a twinkle in his eye, “otherwise we wouldn’t have had exactly the same results.”

Bilal, who took Physics, IT, Accounting, and AP Maths, has his heart set on studying engineering at UCT as he has an interest in mechatronics. If accepted, he’s likely to move in with his older brother, who lives in Cape Town (as do the other two older Tayob siblings).

Tahir is considering a business science law or an actuarial science degree at UCT, if all goes according to plan – but he says he’d prefer to live in residence. Mom and Dad Tayob, both CAs, will be planning trips to the Mother City for sure.

Bilal has been focusing on exercise during his long pre-university holiday. He’s been doing strength training and playing tennis. Tahir says he wanted to do something productive, so he’s started learning German! He also signed up for a certificated, 32-hour online course in financial markets from Yale University, which he hopes will help him start his adult financial life off on a good foot.

Tahir acknowledges that 2020 has been an unprecedented year, with plenty of stresses and opportunities to become demoralised. “You wait your entire school career for the climax of the Matric year, and last year, so much of that Matric experience fell away for us. The Matric dance, several other Matric traditions, the opportunities to be leaders of the school… We had to adapt and find other ways of getting that fulfilment.”

Tahir says it’s important to find a reason to continue, so that you keep motivation levels up, and he feels his class achieved this pretty well under the circumstances.

“Online platforms were really important in fostering and creating a sense of belonging for us, to remind us: ‘I’m not the only one going through this. This experience is not limited to me, or us as a local school, but actually all Matrics worldwide’,” he says.

The learners agree that their school prepared them well for their switch to online schooling early in their Matric year.

“We’ve been using iPads since Grade 8. Our school adapts easily,” a chatty Tahir, the group’s unofficial spokesperson, tells us.

“But of course it was also a learning curve. We’re not used to communicating that much with teachers on a one-to-one basis,” he explains, saying barriers of shyness simply had to be overcome, because it soon became apparent their teachers had made themselves available “24/7, and they were amazing”.

“In June, the Matrics were the first group to return to school in person. My history teacher, Ms Friedman, is a high-risk individual, and she was willing to come in to teach me. I thought that was an amazing sacrifice and risk, which played a major part in keeping my motivation up. Because now, we don’t want to disappoint her!

She’s made such a sacrifice. You want all that dedication to have a measurable outcome.”

Eleven students also showed equal resilience as they transitioned from starting Matric in a school that was their home for 11 years to completing Matric after joining Sacred Heart College in June, when their school closed.

As the class of 2020, all 60-odd matriculants have so much to be proud of, the young men reckon. “We achieved the best results for the school in the past 23 years, through a pandemic. We are destined for great things.”

How To Manage Kids And Screens