The Morning Voice of Radio Veritas 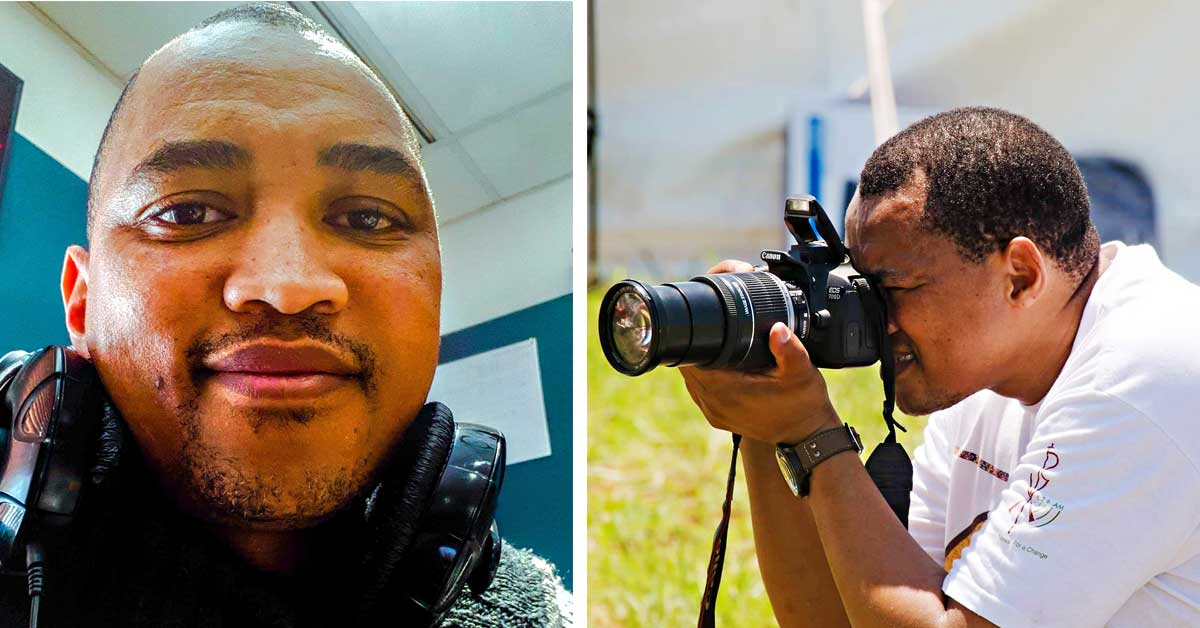 The late Dominican Father Emil Blaser, founder of Radio Veritas, used to say: “There is nothing wrong with dreaming. And it is particularly rewarding when one’s dream becomes a reality.” He might well have had Radio Veritas station manager Khanya Litabe in mind when he said that.

A veteran of Radio Veritas’ early days, Khanya Litabe presents the station’s morning show and helps run it behind the scenes. He spoke to Daluxolo Moloantoa.

Khanya, a Wits journalism and media studies graduate, has spent his entire broadcasting career at Radio Veritas, South Africa’s only Catholic radio station. He was there in the station’s infancy, 20 years ago, as a student volunteer. At the time it had no broadcast licence yet and would send pre-packaged content to community radio stations that had been granted temporary licences.

But first, let’s rewind to the beginning. Hailing from the town of Phuthaditjhaba in the former homeland of Qwa-Qwa in the Free State, Khanya was raised in a single-parent household. His father, a school teacher and choir conductor, was the sole parent and breadwinner. The second of five siblings, Khanya from an early age harboured ambitions of a career in music, as a singer or — the apple did not fall far from the tree — a choir conductor.

As a youngster, when other boys were playing soccer or riding their BMX bicycles, he would be in choir practice in the local Dutch Reformed church (he later converted to Catholicism). “When I was about eight or nine, my father urged my older brother, Prince, and me to join the church youth choir,” Khanya recalls. They rehearsed from 4-6pm on weekday afternoons. “On our first day we found the choir singing to musical notes posted on a wall.”

The experience he gained at the Protestant church in Phuthaditjhaba led him to become involved in various choral music activities in the Catholic Church after he moved to Johannesburg. He has served as organist at Our Lady of Assumption church in Molapo, Soweto, and Sacred Heart church in Katlehong on Johannesburg’s West Rand. Drawing from his choral background, Khanya has also been instrumental in the creation of the popular Radio Veritas Choir Music Festival.

Music forms part of his greatest memories from his two decades at the station — from his days as a student volunteer and throughout the years of rising through the ranks to his current position as the station’s general manager. He laughs when he thinks back to the early days of being on air. “When Veritas Productions, as we were called then, was granted a temporary radio licence, we prerecorded our shows and put them on air. I nearly fell off the chair when I heard my voice for the first time on air.”

Khanya has a repository of broadcasting anecdotes. “A memorable occasion was when I used to do the birthday celebration show in the afternoons. I once called a traffic officer live on air to wish him a happy birthday. It turned out that when I called, he was busy at a roadblock, and had just stopped a vehicle. He told the vehicle’s occupants that they were live on the radio, and they joined me in singing happy birthday to him.”

When Fr Blaser retired from presenting the morning show in 2018, Khanya succeeded his mentor. He is a rare breed: a South African radio station manager whose voice is heard daily on air. He hosts the weekday morning show, called “Matins”, alongside former SABC radio broadcaster Colin Yorke.

“When Fr Emil retired from the morning show, I was asked to carry on from where he left off. Those were big shoes to fill, and so both Colin and I had to take one shoe each! Colin is a well-travelled veteran broadcaster, and his knowledge of Church music is unmatched. He is good fun to be with on the show, and everyone, young and old, can relate to him.”

“Matins” is produced by Olinda Orlando, a self-proclaimed “Dominican granny”. “Olinda is a very talented and creative person. She was instrumental in the establishment of Radio Veritas with Fr Emil in 1999. Normally she has the show ready the day before the broadcast. Depending on what we are doing on the show, preparation might involve reading up on a certain subject, watching the news, research, arranging interviews, having the Catechism of the Church in front of you, and so on,” Khanya explains. 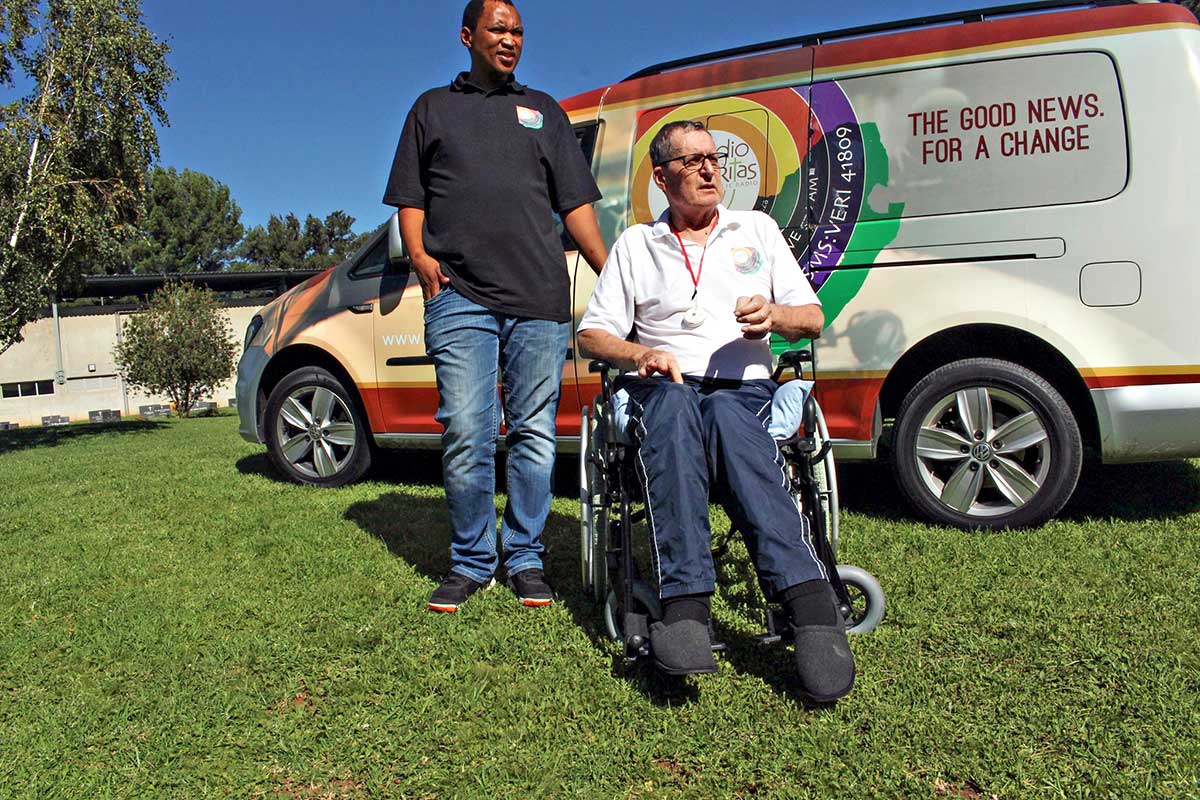 But his great mentor was, of course, Fr Emil, who died on November 16 last year. Khanya’s singing at the priest’s Requiem Mass touched all present, in the Springs church and behind screens following the livestream.

“I spent two decades working with Fr Emil. He was, and still remains, my hero and mentor. The kind of broadcaster I am today, was shaped by Fr Emil — through him identifying the talent in me, his encouraging words, his corrections of pronunciation. I learned almost everything I know about radio broadcasting from him. I have benefited a lot from his love for languages, his curiosity, his desire to always learn, his ability to listen,” Khanya says.

“He was sometimes stern and firm, but always aiming at the good that would come out of a situation. He was not lacking in praise where it was due, and would put his foot down where a situation demanded. From him I learnt humility, resilience, patience. Through working with him and Olinda, I learnt that Catholic radio in a country like ours is a unique kettle of fish.”

Khanya also learnt from his mentor by observation. “Fr Emil’s face would light up when he listened to good music in the studio. He’d always say, ‘Now listen to this…’ Before the live broadcast of Mass at noon, he would say, ‘Give me some time to think about the readings’, and he would sit on the couch in his office and close his eyes for a few minutes. Then he’d walk into the studio, celebrate Mass, and give the most inspiring homily, using real-life examples.”

The loss of his mentor was one of the big blows of 2020. Another one was being diagnosed with Covid-19. “It was of a mild form, but still not an easy journey,” says Khanya. “I had observed all the safety regulations, yet I still contracted it. So there was an element of self-blame, because surely I must have dropped my guard somewhere along the way. It affected the station; we had to close down for a period to meet safety regulations. Those close to me had to go into quarantine. I had to self-isolate for 14 days. I experienced some true suffering and gnashing of teeth when my face or jaw would even go into spasm. Out of all this I learnt the importance of a family support structure. My wife Phenyo was a grand pillar,” he recalls.

There is still one particular ambition Khanya harbours: an academy for Catholic journalists. “The Catholic media landscape in South Africa is in a healthy state, but it could improve immensely. A well-funded, well-run, well-staffed academy for Catholic print, online, radio and TV media professionals and students could make a huge difference,” he suggests. In such an academy, clergy, religious and laity would learn the methods of effective communication, and how these can be applied in different situations which the Church, and therefore also general society, faces. “More collaboration is what our Catholic media needs. It has proven to work wonders in the recent past.”

Khanya’s view is that Radio Veritas will grow from strength to strength, going into the future. “We will continue to serve our community, the Church,” he promises. “We aim to bring more programmes that matter to the listener. For that, we’re going to build more collaborations with our community. It is our intention to maintain Fr Emil’s legacy of bringing ‘the Good News, for a change’ — our motto — to all those who encounter Radio Veritas.”

Radio Veritas broadcasts in Gauteng on 576AM, on DStv audio channel 870, and streams live on its website: www.radioveritas.co.za