Vatican Says No Blessing Gay Unions, but No Negative Judgement on Gay People 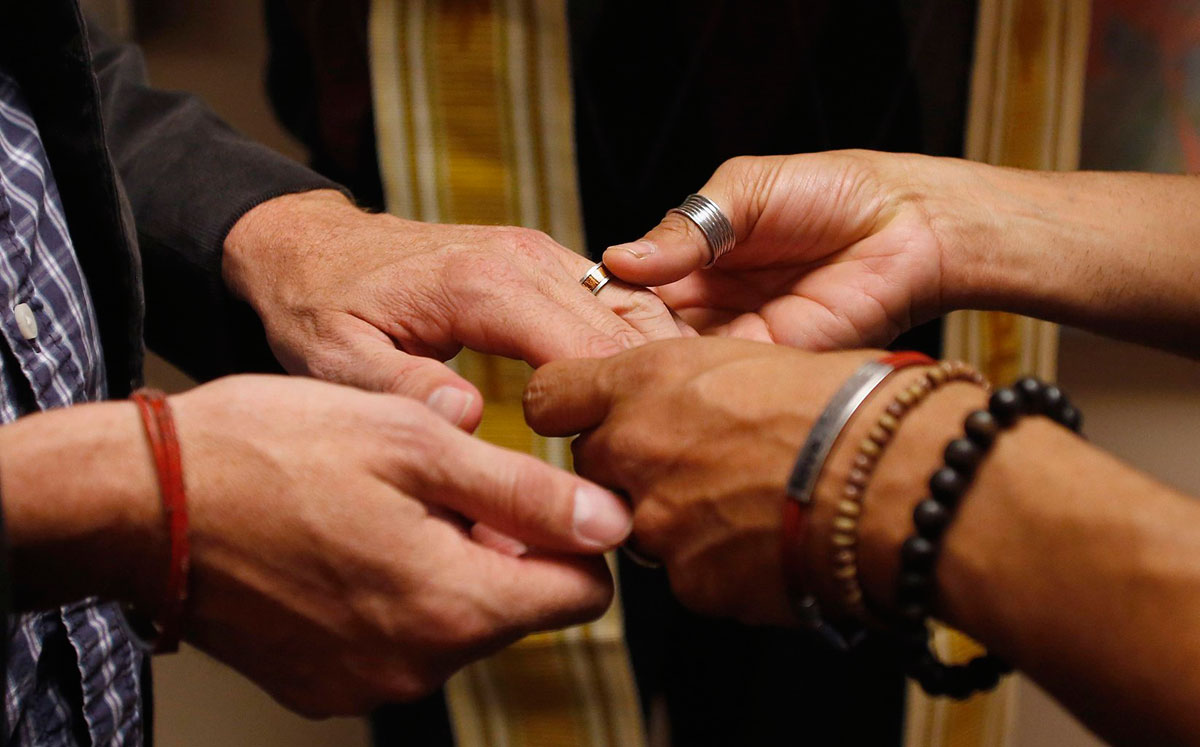 A same-sex couple is pictured in a file photo exchanging rings during a ceremony in Salt Lake City. The Vatican’s doctrinal office says in a new note that any form of blessing of same-sex unions is “illicit,” but that the negative judgment is on the blessing of unions, not the people, who must be respected. (CNS photo/Jim Urquhar, Reuters)

By Carol Glatz – While homosexual men and women must be respected, any form of blessing a same-sex union is “illicit,” said the Vatican Congregation for the Doctrine of the Faith.

The negative judgment is on the blessing of unions, not the people who may still receive a blessing as individuals, it said in a statement published March 15.

The statement was a response to a question or “dubium” that came from priests and lay faithful “who require clarification and guidance concerning a controversial issue,” said an official commentary accompanying the statement.

The response to the question, “Does the church have the power to give the blessing to unions of persons of the same sex?” was “Negative.”

It is not licit to impart a blessing on relationships, or partnerships, even stable, that involve sexual activity outside of marriage – ie outside the indissoluble union of a man and a woman open in itself to the transmission of life[/pull-quote-right]

“It is not licit to impart a blessing on relationships, or partnerships, even stable, that involve sexual activity outside of marriage – ie outside the indissoluble union of a man and a woman open in itself to the transmission of life – as is the case of the unions between persons of the same sex,” the doctrinal office said in an explanatory note accompanying the statement.

Pope Francis approved both the statement and the note for publication.

“The Christian community and its pastors are called to welcome with respect and sensitivity persons with homosexual inclinations and will know how to find the most appropriate ways, consistent with church teaching, to proclaim to them the Gospel in its fullness,” the explanatory note said.

The clarification “does not preclude the blessings given to individual persons with homosexual inclinations, who manifest the will to live in fidelity to the revealed plans of God as proposed by church teaching.”

“Rather, it declares illicit any form of blessing that tends to acknowledge their unions as such. In this case, in fact, the blessing would manifest not the intention to entrust such individual persons to the protection and help of God, in the sense mentioned above, but to approve and encourage a choice and a way of life that cannot be recognised as objectively ordered to the revealed plans of God,” said the doctrinal office.

The statement came days before the launch March 19 of a yearlong reflection on “Amoris Laetitia” that will focus on the family and conjugal love.

The date marks the fifth anniversary of Pope Francis’ apostolic exhortation “Amoris Laetitia” (“The Joy of Love”), which affirmed church teaching on family life and marriage, but also underlined the importance of the church meeting people where they are in order to help guide them on a path of discernment and making moral decisions.

The doctrinal congregation said in its note that some church communities had promoted “plans and proposals for blessings of unions of persons of the same sex.”

“Such projects are not infrequently motivated by a sincere desire to welcome and accompany homosexual persons, to whom are proposed paths of growth in faith,” it said.

In fact, the question of blessing same-sex unions arose from this “sincere desire to welcome and accompany homosexual persons” as indicated by Pope Francis at the conclusion of the two synodal assemblies on the family, it said.

That invitation, it added, was for communities “to evaluate, with appropriate discernment, projects and pastoral proposals directed to this end,” and in some cases, those proposals included blessings given to the unions of persons of the same sex.

The doctrinal congregation said the church does not and cannot have the power to impart her blessing on such unions and, therefore, “any form of blessing that tends to acknowledge their unions as such” is illicit.

That is because a blessing “would constitute a certain imitation or analogue of the nuptial blessing invoked on the man and woman united in the sacrament of matrimony,” it said, citing paragraph 251 of “Amoris Laetitia,” which reiterated the synod members’ conclusion that “there are absolutely no grounds for considering homosexual unions to be in any way similar or even remotely analogous to God’s plan for marriage and family.”

“Only those realities which are in themselves ordered to serve those ends are congruent with the essence of the blessing imparted by the church,” it said. As such, it is illicit to bless any relationship or partnership that is outside the indissoluble union of a man and a woman open to the transmission of life, it added.

Declaring “the unlawfulness of blessings of unions between persons of the same sex is not therefore, and is not intended to be, a form of unjust discrimination, but rather a reminder of the truth of the liturgical rite and of the very nature of the sacramentals, as the church understands them,” the doctrinal office said.

The church teaches that “men and women with homosexual tendencies ‘must be accepted with respect, compassion and sensitivity. Every sign of unjust discrimination in their regard should be avoided.'”

As such, the doctrinal note makes a “fundamental and decisive distinction between persons and the union. This is so that the negative judgment on the blessing of unions of persons of the same sex does not imply a judgment on persons,” it said.

Such blessings are illicit for three reasons, it said:

– In addition to such a blessing implying “a certain imitation or analogue of the nuptial blessing” imparted to a man and a woman united in the sacrament of matrimony, there is the nature and value of blessings.

– Blessings belong to “sacramentals, which are ‘liturgical actions of the church’ that require consonance of life with what they signify and generate,” so “a blessing on a human relationship requires that it be ordered to both receive and express the good that is pronounced and given by the blessing.”

– And, “the order that makes one fit to receive the gift is given by the ‘designs of God inscribed in creation, and fully revealed by Christ the Lord.'” The church does not have power over God’s designs nor is she “the arbiter of these designs and the truths they express, but their faithful interpreter and witness.”

“God himself never ceases to bless each of his pilgrim children in this world, because for him ‘we are more important to God than all of the sins that we can commit,'” the congregation said. “But he does not and cannot bless sin: he blesses sinful man, so that he may recognise that he is part of his plan of love and allow himself to be changed by him. He in fact ‘takes us as we are, but never leaves us as we are.'”

Living Sexuality In The Church’s Embrace