800th Anniversary of the Death of St Dominic 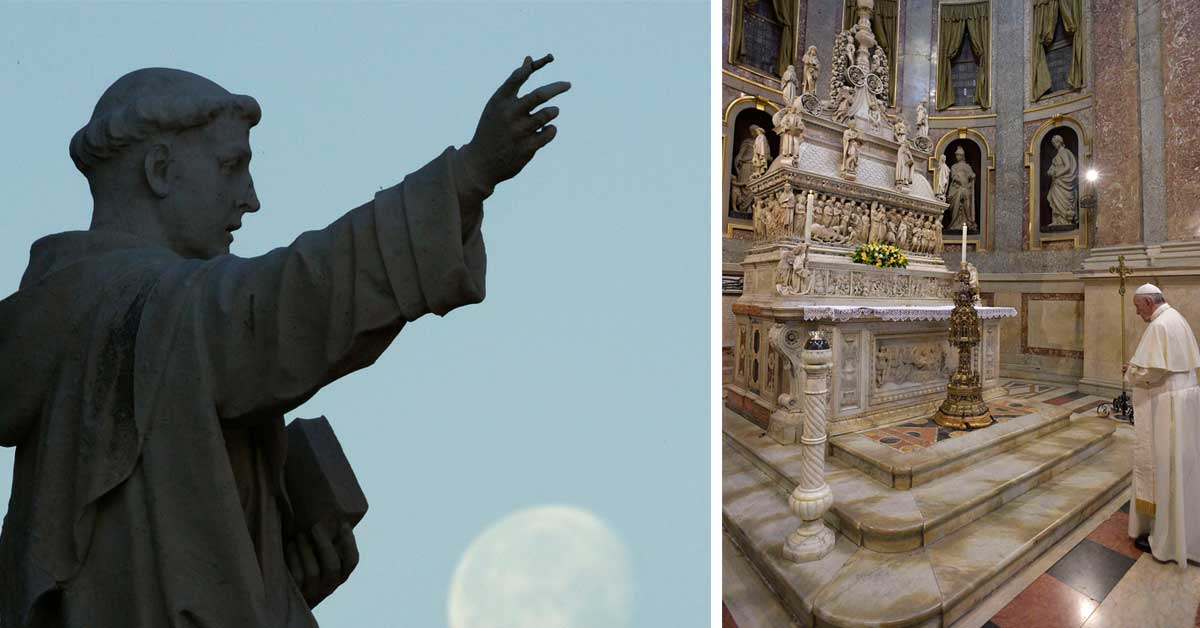 (Left)The moon is seen near a statue of St. Dominic outside the Dominican House of Studies in Washington. In a message commemorating the 800th anniversary of the death of St Dominic, Pope Francis said the life of the Spanish saint and his zeal for preaching the Gospel serve “as an inspiration to all the baptised.” (CNS photo/Bob Roller). (Right) Pope Francis prays at the tomb of St Dominic at the Cathedral of St Peter in Bologna, Italy.  (CNS photo/Vatican Media)

Marking the 800th anniversary of the death of St Dominic, the pope said in a letter dated May 24 that the founder of the Dominican order not only “responded to the urgent need of his time” through preaching, but by also giving a “convincing witness” to holiness.

“In our own age, characterised by epochal changes and new challenges to the church’s evangelising mission, Dominic can thus serve as an inspiration to all the baptised, who are called, as missionary disciples, to reach every ‘periphery’ of our world with the light of the Gospel and the merciful love of Christ,” he said.

The letter, which was sent to Dominican Father Gerard Francisco Timoner, master general of the order, was released by the Vatican May 24.

In it, the pope said St Dominic’s “great call was to preach the Gospel of God’s merciful love” and his concern for “those experiencing material and spiritual poverty” laid the foundation of the Dominican order and its mission.

“The Gospel message of our inalienable human dignity as children of God and members of the one human family challenges the church in our own day to strengthen the bonds of social friendship, to overcome unjust economic and political structures, and to work for the integral development of every individual and people,” he said.

He also expressed his hope that the Dominican Order of Preachers continues to be “in the forefront of a renewed proclamation of the Gospel” that speaks to the hearts of all men and women and “awaken in them a thirst for the coming of Christ’s kingdom of holiness, justice and peace!”

Along with St Francis, the pope added, St. Dominic knew that the preaching of the Gospel in both word and deed also required the establishment of an ecclesial community “in fraternal unity and missionary discipleship.”

Recalling the many saints belonging to the order, including St Catherine of Siena, St Martin de Porres and St Rose of Lima, Pope Francis remembered those who also gave their lives for the Gospel.

“In this anniversary year, we cannot fail to remember those members of the Dominican family whose martyrdom was itself a powerful form of preaching,” he said.