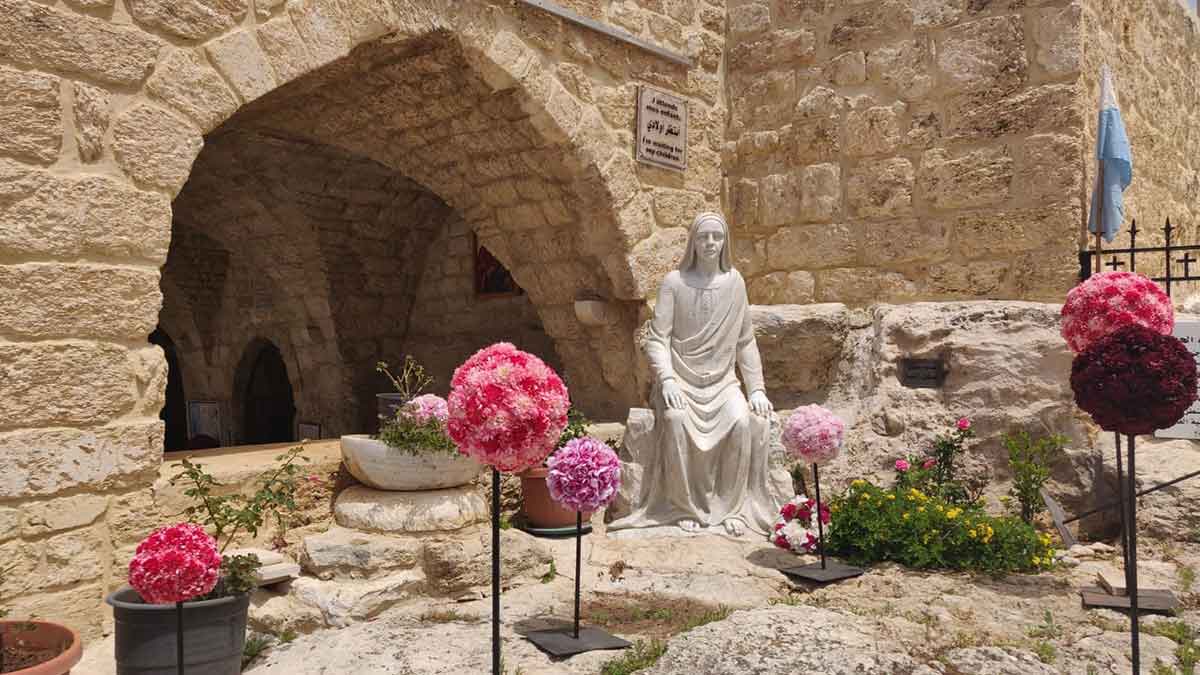 A statue of Mary is seen outside the ancient grotto of Our Lady of Mantara in Maghdouché, Lebanon, April 30, 2021. It is the site where tradition says Mary waited for Jesus while he was preaching in Sidon and Tyre. (CNS photo/Doreen Abi Raad)

By Doreen Abi Raad  –  In the village of Maghdouché, overlooking the ancient Mediterranean coastal city of Sidon, a statue of the Blessed Mother holding the infant Jesus graces the hilltop.

It is also the site where holy tradition says Mary waited for her Jesus while he was preaching in Sidon and Tyre, thus the name, “Our Lady of Mantara,” or “waiting.” After his preaching, Jesus would join his mother at the grotto.

On the grounds of the shrine, the ancient grotto offers a peaceful oasis to pray. At its entrance, a statue of Mary, seated, welcomes visitors. A plaque behind her proclaims in French, Arabic and English: “I’m waiting for my children.”

The grotto – or cave – was discovered in 1721 when a shepherd lost a small lamb in the sprawling fields. The shepherd found his lamb near the grotto. Inside the grotto, he found an icon representing the Blessed Mother on an ancient altar.

“It is especially important that Jesus has visited this place,” Melkite Catholic Archbishop Elie Béchara Haddad of Sidon said. For this reason, he considers that Mantara is a Christological sanctuary, rather than a Marian sanctuary.

From its summit nearly 700 feet above sea level, the edge of the hill beyond the grotto offers a view of Sidon and the Mediterranean coast. Pilgrims can gaze up and feel they are under the protection of Mary holding Jesus. A bronze statue, 26 feet high, sits atop a 92-foot tower. Beneath the tower is a small chapel, which is currently closed during the pandemic.

Archbishop Haddad said that in many areas in this region of southern Lebanon, including around Maghdouché, evidence of ancient Roman roads can be found.

Muslims and Christians alike visit the shrine and have attested to miracles received, although the miracles have not been verified. Miracles related to fertility problems and cancer cures are especially common, the archbishop said.

It is not unusual to see a woman walking on her knees, approaching the sanctuary as an act of piety for a prayer request.

Gazing at the life-size statue of Jesus’ mother at the cave’s entrance, Vanessa added: “I like to see the Virgin Mary waiting for me.”

Rachid and Laure Sarrough, also visiting from Beirut, made the pilgrimage especially to mark the beginning of May, the month of Mary.

“It is something really special to be where Jesus and Mary both put their feet. It is holy land,” Laure Sarrough told CNS.

“It gives my faith a boost to come here,” said her husband, Rachid. “We know that Jesus is all powerful. When I pray at Mantara, I feel that Jesus is also merciful to our prayer petitions because he was here.”

“The fact that Jesus and Mary came to Lebanon and came to this area is a testimony that this land is a holy land,” Melkite Father Samir Nahra, rector of the sanctuary, told CNS.

“This is a very difficult time now for Lebanon because of the coronavirus and the economic crisis,” Father Nahra said. “Lord have mercy on Lebanon.”

Typically, before the COVID-19 pandemic, the shrine received tourists from all over the world.

Sidon has a Muslim population of more than 90%. “We live in charity together,” said Archbishop Haddad.

Usually Archbishop Haddad hosts an iftar feast — the fast-breaking meal — during the Muslim holy month of Ramadan, which this year concludes May 12.

“For Muslims, Ramadan is a very dear occasion, and when you share this occasion with them, you become closer,” Archbishop Haddad said.

However, due to coronavirus restrictions, there has been no such iftar event since 2019. This year, as in 2020, salutations for the feast are shared by phone calls in place of a gathering, the archbishop said.

Amid the pandemic, expressions of fraternity have continued between both communities, including phone greetings for Christmas and Easter from Muslims and Ramadan greetings from Christians.

Acts of charity are also common.

When the Melkite archdiocese distributes food packages to the faithful in need, Muslim families are included among the recipients.

“We are neighbours, one to the other, and so we distribute without discrimination,” Archbishop Haddad explained.

During Ramadan this year, for example, there were some donations from Muslims to help with tuition for needy Christian students in the area’s Catholic schools.

“It is a good sign of fraternity,” Archbishop Haddad said.

Each month, Archbishop Haddad and Sidon’s Maronite Catholic and Greek Orthodox bishops meet with the Sunni and Shiite muftis of Sidon. They discuss matters relating to the social life in Sidon, for example, how the municipality and nongovernmental organisations can help to serve the poor.

“For example, we are a minority here (in Sidon). If it wasn’t for coexistence and tolerance for one another, we Christians wouldn’t be here,” he added.