Pope to Institute a Formal ‘Ministry of Catechist’ 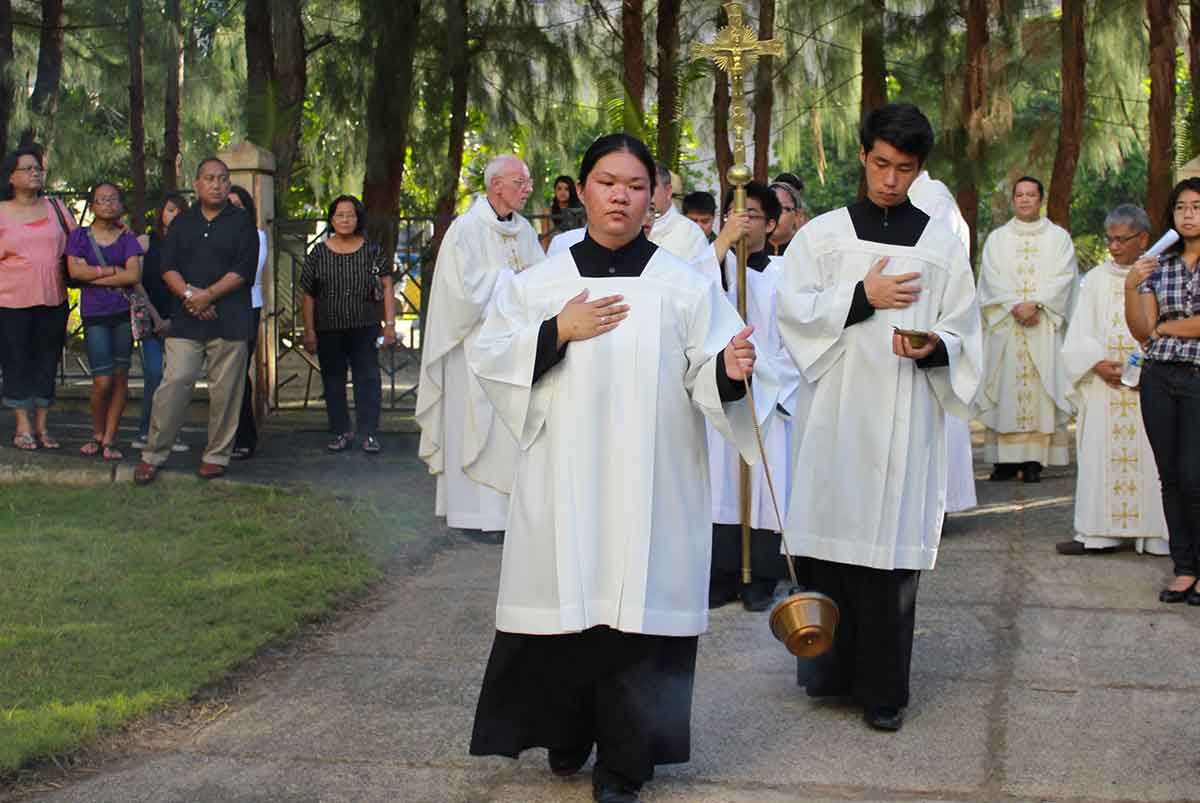 Altar servers lead the procession during a special Mass of thanksgiving in honour of St Peter Calungsod at the Padre Diego Luis de San Vitores Shrine near Tumon Bay in Guam. St Calungsod was a young lay catechist from the Philippines martyred alongside Father San Vitores at Tumon in 1672. He was canonised by Pope Benedict XVI in 2012. (CNS photo/Gina E. Taitano, U Matuna Si Yu’os)

By Cindy Wooden – While millions of laypeople around the world are recognised as catechists in their parish or diocese, Pope Francis is preparing to formally institute the “ministry of catechist.”

The Vatican press office said on May 5 that Pope Francis’ apostolic letter “Antiquum Ministerium” (“Ancient Ministry”), instituting the ministry, would be released on May 11.

Pope Francis often has spoken of the importance of selecting, training and supporting catechists, who are called to lead people to a deeper relationship with Jesus, prepare them to receive the sacraments and educate them in the teachings of the church.

In many parts of the world, especially in communities without a resident priest, catechists are the leaders of the local Catholic community, evangelising, convoking and guiding their fellow Catholics in prayer and works of charity. And, in missionary territories under the guidance of the Congregation for the Evangelisation of Peoples, they already serve with a specific mandate from their bishop.

The congregation’s 1997 Guide for Catechists noted that “the Code of Canon Law has a canon on catechists involved in strictly missionary activity and describes them as ‘lay members of Christ’s faithful who have received proper formation and are outstanding in their living of the Christian life. Under the direction of missionaries, they are to present the Gospel teaching and engage in liturgical worship and in works of charity.'”

In some communities, it said, catechists may be entrusted by their bishop with the tasks of: “preaching to non-Christians; catechising catechumens and those already baptised; leading community prayer, especially at the Sunday liturgy in the absence of a priest; helping the sick and presiding at funerals; training other catechists in special centres or guiding volunteer catechists in their work; taking charge of pastoral initiatives and organising parish functions; helping the poor and working for human development and justice.”

The Statistical Yearbook of the Church, a Vatican publication, said that as of Dec. 31, 2019, there were more than 3 million catechists serving the church.

At meetings of the Synod of Bishops over the past 30 years, especially synods for individual regions of the world, bishops highlighted the important role of lay catechists in building and sustaining local Christian communities and called for more resources to be devoted to their training and support and for greater recognition and respect for their contributions.

Pope Francis’ decision to formally institute the ministry of catechist seems to be a response to those calls.

The move follows the pope’s decision in January to open the ministries of lector and acolyte to women. While in most dioceses women already served as readers and altar servers at Mass, they were not formally instituted in those services on a stable basis.

In his January decision, the pope cited the request made by members of the 2019 Synod of Bishops for the Amazon, asking that the church “promote and confer ministries for men and women in an equitable manner. The fabric of the local church, in the Amazon as elsewhere, is guaranteed by small missionary church communities that cultivate faith, listen to the Word and celebrate together close to the people’s life. It is the church of baptised men and women that we must consolidate by promoting ministries and, above all, an awareness of baptismal dignity.”