Mother and Daughters Work Together in Catholic Hospital 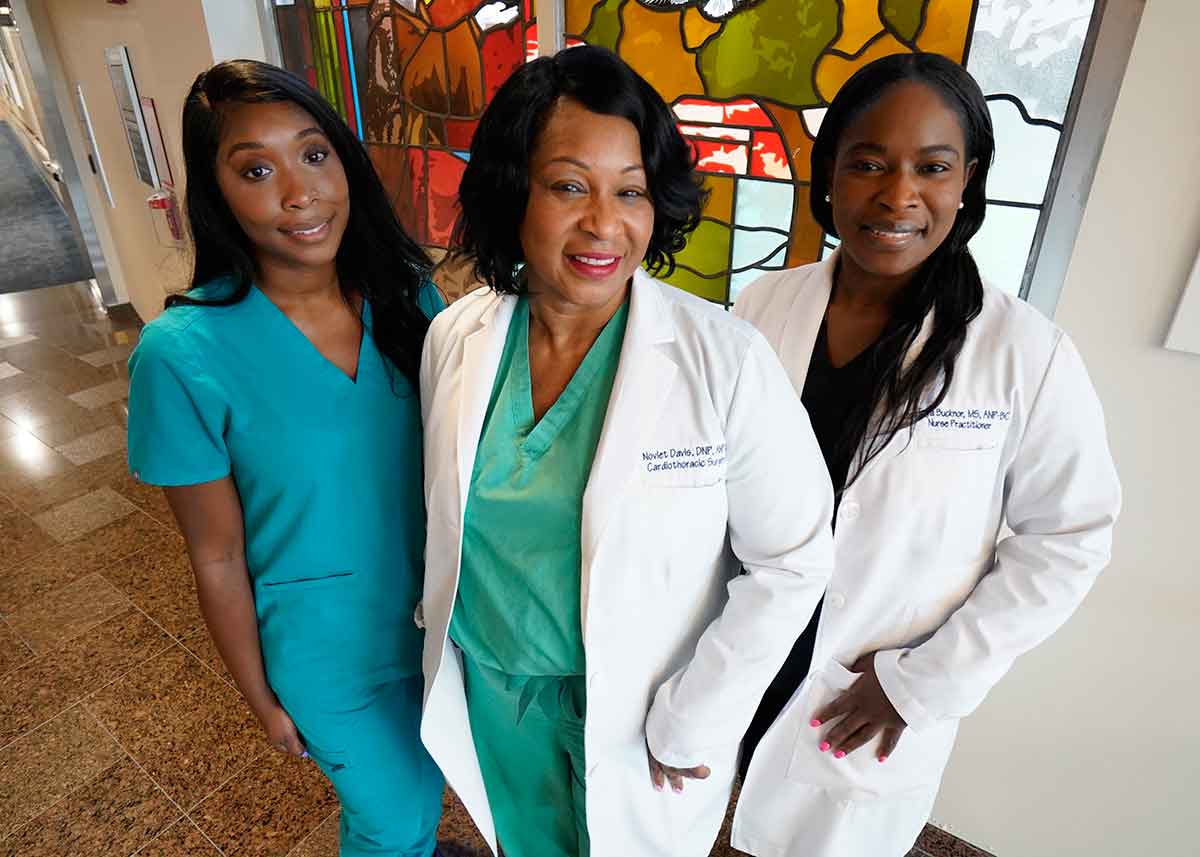 By Gregory A. Shemitz – Caring for the sick is a vocation and way of life shared by a mother and two daughters serving together at a Catholic Hospital in Long Island, New York.

Novlet Davis-Bucknor, 59, is a nurse practitioner in the cardiothoracic department of St. Francis Hospital & Heart Center in Nassau County. Her oldest child, LaToya Bucknor, 39, also a nurse practitioner, works with the critical care team. Another daughter, Shekeya Washington, 31, is a registered nurse in the medical intensive care unit.

“It’s good to work together because we always have each other to lean on,” said Novlet, who was born and raised in Jamaica and immigrated at age 26 to the U.S., where a few years later she began her studies to be a nurse.

Novlet is the ultimate role model as a mom and professional woman, LaToya and Shekeya told Catholic News Service.

“She’s always there for us,” said LaToya. “She’s always loving and showing us that no matter what we go through in life, she’s always going to be there to support us.”

“My mom has shown so much ambition and strength,” Shekeya said. “She’s worked really hard to get where she is today. She’s never satisfied. She always pushes for more. She’s an example for my sisters and me as a Black woman.”

An office manager at a furniture store in Jamaica, Novlet didn’t initially consider nursing as a career until her husband, Paul Bucknor, suggested it when she came to this country.

She had a change of heart after thinking about her mother, Frances Amanda Davis, a loving, faith-filled woman who gave birth to 14 children, was a homemaker and also assisted midwives with delivering babies.

“My mom was always giving, always helping,” said Novlet. “I wanted to do something to give back. I went into nursing because I wanted to feel fulfilment when I worked.”

Novlet, simultaneously managing her roles as a wife, mother and student, earned her bachelor’s and master’s degrees in nursing at Molloy College in Rockville Centre, and several years later, she obtained a doctorate in nursing practice at New York’s Stony Brook University.

She began her career in 1995 at age 34 as a nurse’s aide at St. Francis, where she has worked throughout her career. She became a registered nurse in 1996 and a nurse practitioner 12 years later.

Inspired by her mom’s career, LaToya said she decided at age 15 she wanted to be a nurse. Following in her footsteps, she, too, earned bachelor’s and master’s degrees at Molloy, and has worked her entire career at St. Francis. She became a nurse practitioner in 2019.

Shekeya, on the other hand, said watching her mother’s daily routine when she was a child had a different effect on her.

“To be honest, she kind of scared me away from nursing at the beginning,” said Shekeya, chuckling. “She worked nights when we were little kids. We couldn’t run around the house because she was sleeping. And when she came home, she would talk about her rough day as a floor nurse.”

After studying for her bachelor’s in biology at Hofstra University in Long Island, Shekeya considered continuing her education to become a physician or a physician’s assistant. However, after accepting a job as a unit clerk at St. Francis, and seeing her mother and other nurses in action, she changed her mind.

“Working at St. Francis allowed me to see the other side of nursing,” said Shekeya, who lives at home with her parents and younger sister in Queens. “Between what my mom showed me and what I got to see for myself working at the hospital, that cemented it for me. I went back for my nursing degree.”

Shekeya graduated from Molloy’s nursing program in 2018 and wants to further her studies at some point, with the goal of becoming a nurse practitioner or a nurse anaesthetist.

Not all of Novlet’s children opted for nursing. A third daughter, 29-year-old Shenequa Bucknor, chose a career in marketing and public relations.

While nursing has proven to be a rewarding career for Novlet, LaToya and Shekeya, it has also presented its share of risks. That was never more evident than a year ago, when they found themselves battling to save lives — and to protect their own — in the early days of the COVID-19 pandemic.

Looking back at that frightening time, they said their strong family bond and shared professional experiences in a common workplace proved vital to their survival, physically and emotionally.

Though working in different areas, their paths occasionally intersected during the chaos of the first few months of the surging coronavirus. Dressed head-to-toe in personal protective equipment, they would hug each other when the moment allowed and share expertise in their respective specialties to determine the best way to treat the mounting number of critically sick patients.

“We took it one day at a time, one shift at a time,” said LaToya. “We tried to support each other, encourage each other.”

Shekeya, a nurse for less than two years when the coronavirus struck, was shaken by the experience. She said her mom and sister helped guide her through a period during which she had a constant feeling of doom while working nonstop in a unit “that saw a lot of death.”

Shekeya and her mother both contracted COVID-19 but had mild symptoms and recovered relatively quickly. LaToya, the mother of a 10-year-old son, did not get infected.

Novlet shared a story about a patient pleading with Shekeya, telling her, “Don’t let me die.” Upon leaving the hospital that day, Novlet and her daughters prayed for the patient, only to learn later the person passed away.

“(Shekeya) was devastated,” remembered Novlet. “I was crying with her and LaToya was comforting both of us. At that moment we had each other to lean on.”

The ongoing health crisis has suspended an annual medical mission trip Novlet, her husband and all three children have been making to Jamaica since 2013. For one week each July, the family and a team of medical professionals and other volunteers from the New York area staff a pop-up clinic in Novlet’s hometown of Clarendon Parish where they provide medical and dental care to its residents.

The humanitarian effort is financed by the LJDR Davis Foundation – a nonprofit cofounded by Novlet and her sister, Pearlyn Clark – in partnership with the Catholic Health Caregivers Fund. The foundation was established in memory of four of Novlet’s siblings, who died between the ages of 28 and 40, primarily as a result of the country’s lack of quality health care, Novlet said.

“We provide free, unbiased medical care to everyone who wants and needs the help,” Novlet said, adding that more than 10,000 people have been served since the program began.

Although the mission trip was cancelled in 2020 and this year, Novlet remains committed to the effort, arranging this past January for clothing, food, beds, wheelchairs and medical supplies to be shipped to Jamaica.

In the past, the journey to Jamaica gave Novlet and her family an opportunity to enjoy a festive reunion with her mother and other relatives. Things will be dramatically different this year, though. The family will be going to Jamaica, not on a mission trip, but to attend the funeral of Novlet’s mom, who died in March of complications from pneumonia at age 94. Frances Amanda Davis will be buried in late May.

Frances’ life story – one filled with many challenges that were overcome through the strength of her character and deep Baptist faith – inspired Novlet last year to author a memoir dedicated to her mother’s legacy called “MAMA’S HEART.”

“I promised my mom that I was going to write her memoir,” explained Novlet. “She was such an inspirational woman and religious woman, a woman who feared God. Even through the deaths of her children, she was still giving God the glory.

“It’s going to be a sombre Mother’s Day this year,” she added. “Hopefully, we can give her all the honours she deserves.”