Pope: Darkness Does Not Mean the Devil Has Won 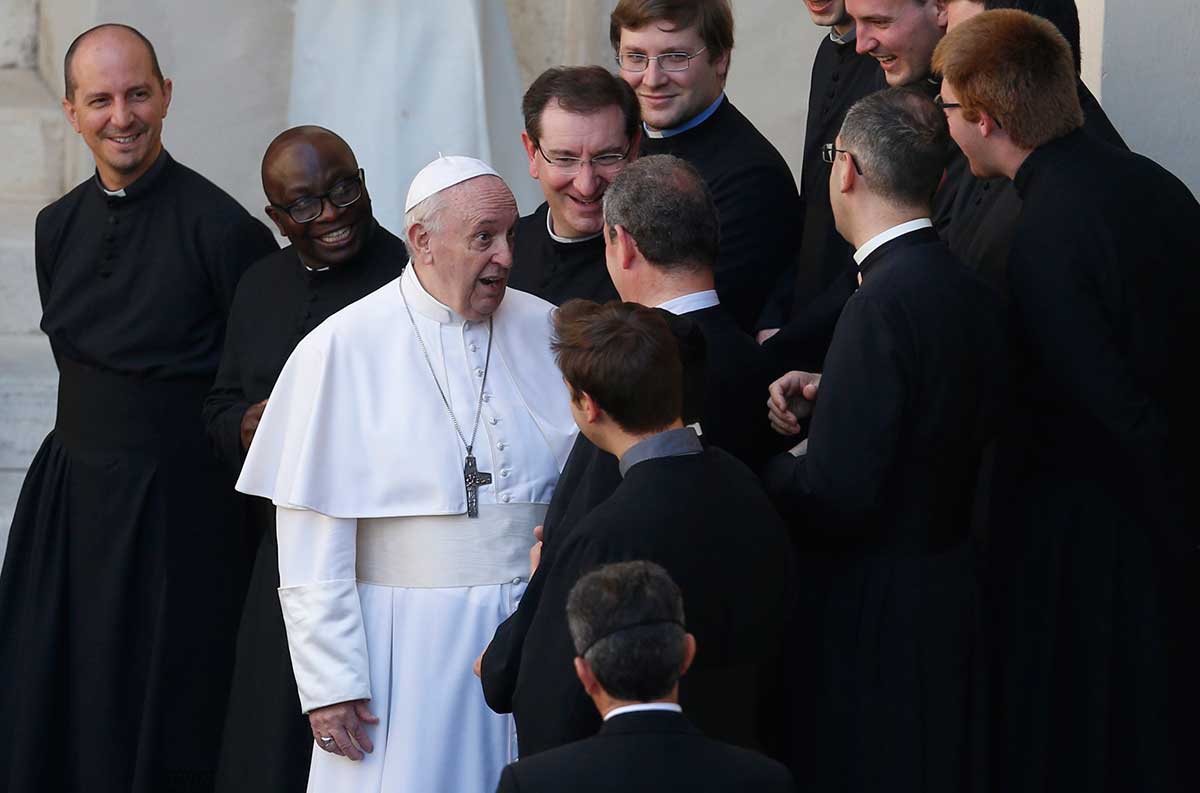 Pope Francis greets priests during his general audience in the San Damaso Courtyard of the Apostolic Palace at the Vatican on May 26, 2021. (CNS photo/Paul Haring)

By Carol Glatz – Prayer is not a magic wand or a way to ask God to be at one’s service, Pope Francis said.

Prayer is a humble dialogue with God to grow spiritually and discover his will for the world, the pope said May 26 during his weekly general audience.

The audience was held in the San Damaso Courtyard of the Apostolic Palace, where attendees were obliged to wear masks, but many ignored social distancing rules as they crowded along the barricades to greet and speak with Pope Francis.

The pope, who had taken off his mask, spoke at length with people, blessing them or objects they had brought, drinking maté, swapping zucchettos and signing books.

One of the many people the pope spoke with was Belarus-born Lidia Maksymowicz, 80, who spent three years at the Auschwitz-Birkenau concentration camp after she was sent there when she was 2 years old. The pope kissed the prisoner number tattooed on her left arm and the two embraced.

In his main audience talk, the pope continued his series on prayer by looking at how people can be certain God really listens to their prayers.

“Sometimes our prayers seem to go unheard, what we have asked for – for ourselves or for others – is not fulfilled,” he said.

“Why does he not respond to our requests?” the pope asked.

The Catechism of the Catholic Church (2735) asks people to think more deeply about why they demand to see the results of their petitions: “What is the image of God that motivates our prayer: an instrument to be used? or the Father of our Lord Jesus Christ?” it says.

The pope said this passage warns people to avoid “the risk of not living an authentic experience of faith, but of transforming the relationship with God into something magical.”

“Prayer is not a magic wand,” he said. “It is a dialogue with the Lord. Indeed, when we pray, we can give in to the risk of not being the ones to serve God, but of expecting him to serve us.”

“When we pray, we need to be humble” and believe “that God will give me what is right to give. He knows,” the pope said.

People sometimes pray for the wrong reasons, keen to make sure God is with them, he said, “but few bother to check whether they are actually with God.”

People need to pray God transforms their heart and to ask the right questions to discover what is best for their spiritual health, Pope Francis said.

However, what about when the prayer request is worthy and charitable, like for the end of a war that does not cease, or “when people pray with a sincere heart, when they ask for things that correspond to the Kingdom of God,” like when a mother prays for her sick child, the pope said. “Why does it sometimes seem that God does not listen?”

Looking at the Gospels, Jesus heals many people, either responding to their pleas immediately or much later, the pope said.

Over time, people may see that some things do work out, “but in God’s way, the divine way, not according to what we wanted at that moment. God’s time is not our time,” he said.

“Evil is lord of the penultimate day,” he said, “the moment when the night is darkest, just before the dawn” when it is so tempting to believe the devil has won.

And may people pray that the Lord give them real faith, he said, because Jesus said faith moves mountains, and Jesus “feels special tenderness before that faith and he listens.”