Pope to New Swiss Guards: You Represent a Church that Welcomes 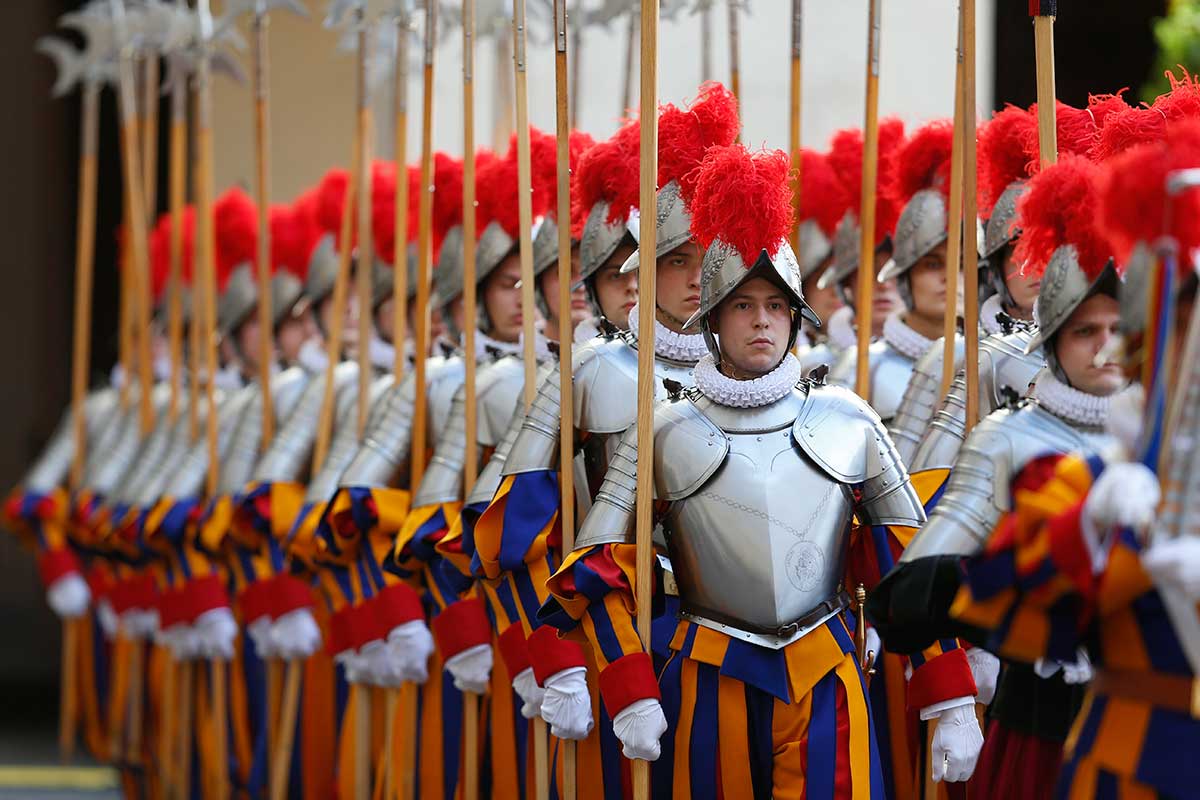 New Swiss Guard members stand at attention during their swearing-in ceremony at the Vatican May 6, 2021. (CNS photo/Paul Haring)

By Carol Glatz – Meeting new recruits to the Swiss Guard, Pope Francis thanked the young men for having chosen to serve the successor of St Peter and he thanked all the guards for their diligence and service.

“Pilgrims and tourists who come to Rome have the opportunity to experience the courtesy and helpfulness of the guards at the various entrances to Vatican City,” he said, asking the guards not to forget the importance of this role of being “a beautiful witness” and sign of a church that welcomes others.

“I greatly appreciate your ability to combine the professional and spiritual aspects” of guard life, “expressing in this way your dedication and fidelity to the Apostolic See,” he said in a private audience at the Vatican May 6, welcoming 34 men from Switzerland who were sworn in as Swiss Guards later the same day.

The colourful induction ceremony of new recruits is traditionally held May 6 to mark the date in 1527 when 147 Swiss Guards lost their lives defending Pope Clement VII in the Sack of Rome. Only 42 guards survived. Holding the ceremony on the anniversary is meant to remind new guards of the seriousness of their commitment.

Last year, the ceremony and papal audience were postponed until early October because of the COVID-19 pandemic.

Respecting ongoing precautions to curb the spread of the coronavirus, only close family members of the new recruits and a limited number of representatives of the Swiss government were allowed to attend the May 6 ceremony in the Vatican’s San Damaso courtyard.

New recruits pledge to “faithfully, loyally and honourably” serve and protect the pontiff and, if necessary, sacrifice their lives for him.

Today, the more than 100 Swiss soldiers are responsible for guarding all entrances into Vatican City State as well as keeping watch over the pope and his residence in the Domus Sanctae Marthae. They also provide security and ceremonial services during liturgical events and visits of heads of state and other dignitaries to the Vatican.

Earlier in the day, Cardinal Pietro Parolin, Vatican secretary of state, celebrated Mass for the new recruits and their families in St. Peter’s Basilica.

Cardinal Parolin said the Holy See was grateful for their “precious service.”

Recalling that “today, dear recruits, with an oath you will declare the desire to give your life for Peter” and his successors, he said their commitment to serve the pope “for love of the Lord” requires “faith and strength of soul.”

He asked the new members of the Swiss Guard to pray for the grace “to welcome the demanding call to mission” and to bear witness to Jesus, especially by the example of their lives