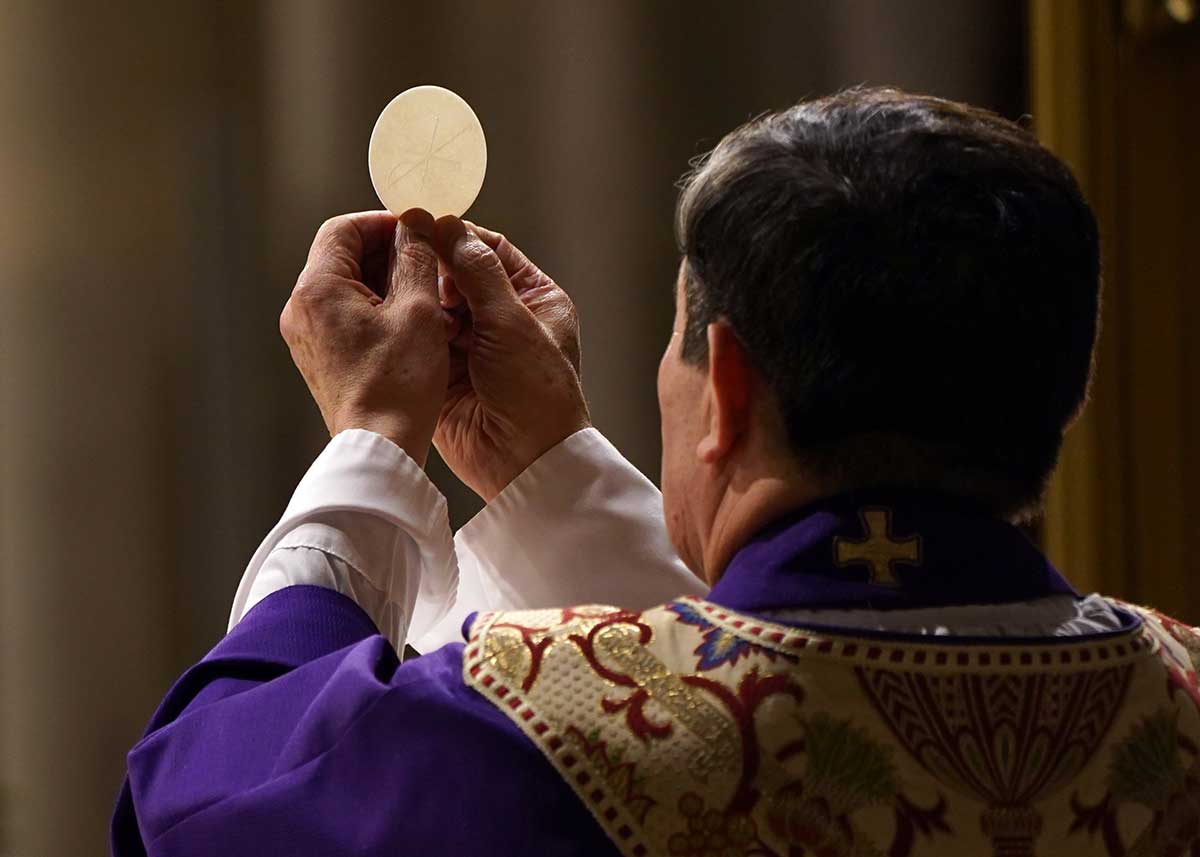 A priest elevates the host during a Mass at St. Patrick’s Cathedral in New York City in 2020. (CNS photo/Gregory A. Shemitz)

By Mark Pattison– “The Eucharist must never be instrumentalised for a political end, no matter how important,” said Bishop Robert W. McElroy of San Diego in a May 5 essay published on the website of America magazine, the Jesuit journal.

Because of efforts by some US bishops to exclude Catholic politicians – including President Joe Biden – from receiving Communion, “the Eucharist is being weaponised and deployed as a tool in political warfare. This must not happen,” the bishop said.

The prelate reissued a warning he gave three months ago at a Feb. 1 Georgetown University online forum against “weaponisation of Eucharist.”

Then, Bishop McElroy said: “I do not see how depriving the president or other political leaders of Eucharist based on their public policy stance can be interpreted in our society as anything other than the weaponisation of Eucharist and an effort not to convince people by argument and by dialogue and by reason, but, rather, to pummel them into submission on the issue.”

Bishop McElroy’s America essay came four days after Archbishop Salvatore J. Cordileone of San Francisco issued a pastoral letter which said: “Those who reject the teaching of the church on the sanctity of human life and those who do not seek to live in accordance with that teaching should not receive the Eucharist.”

Although Bishop McElroy did not identify Archbishop Cordileone by name, he said “a growing movement has emerged in the church in the United States” that calls upon U.S. bishops to exclude Biden and other Catholic elected officials who support legal abortion from receiving Communion.

Those aligned with this movement, he added, use three arguments to justify their position for “a national policy of eucharistic exclusion”: support of abortion that departs from church teaching; a “theology of worthiness” to receive Communion – a rite in which the assembly prays to being, “Lord, I am not worthy”; and a persistent rejection of clear Catholic teaching that “extinguishes that worthiness.”

The bishop cited the Second Vatican Council and the last three popes to blunt those arguments.

The Vatican II document “Lumen Gentium” says Jesus instituted the Eucharist as “a memorial of his death and resurrection: a sacrament of love, a sign of unity, a bond of charity.”

But “a national policy of excluding pro-choice political leaders from the Eucharist will constitute an assault on that unity, on that charity,” Bishop McElroy said.

“Fully half the Catholics in the United States will see this action as partisan in nature, and it will bring the terrible partisan divisions that have plagued our nation into the very act of worship that is intended by God to cause and signify our oneness,” he added.

Backers of eucharistic exclusion cite St Paul’s exhortation “not to eat or drink unworthily at the table of the Lord,” but de-emphasise every element of St Paul except for “discipline,” making it instead “a theology of unworthiness,” Bishop McElroy said.

And, if “abortion and euthanasia are particularly grave evils, they are intrinsically evil and they involve threats to human life,” he asked, then “why hasn’t racism been included in the call for eucharistic sanctions against political leaders?”

Both Vatican II and St. John Paul II in his encyclical “Veritatis Splendor” saw racism as a “compelling intrinsic evil,” Bishop McElroy said, while the U.S. bishops themselves in the pastoral letter “Brothers and Sisters to Us” describe racism as “not merely one sin among many; it is a radical evil that divides the human family and denies the new creation of a redeemed world.”

“It will be impossible to convince large numbers of Catholics in our nation that this omission does not spring from a desire to limit the impact of exclusion to Democratic public leaders and a desire to avoid detracting from the focus on abortion,” Bishop McElroy said.

Cardinal Joseph Ratzinger, the future Pope Benedict XVI, in his “Doctrinal Note on Some Questions Regarding the Participation of Catholics in Political Life,” warned bishops against just such a pathway, the bishop added, quoting: “The Christian faith is an integral unity, and thus it is incoherent to isolate some particular element to the detriment of the whole of Catholic doctrine.”

In Pope Francis’ encyclical “Evangelii Gaudium,” he called Communion “not a prize for the perfect but a powerful medicine and nourishment for the weak.” But “the newly emerging American theology of unworthiness is a direct challenge to this teaching and poses great dangers to Catholic faith, spirituality and practice,” Bishop McElroy said. He also it “constitutes a significant departure” from Vatican II.

“At a time when we are emerging from a pandemic and seeking to rebuild the eucharistic community, it would be particularly wounding to embrace and emphasise a theology of unworthiness and exclusion rather than a theology that emphasises Christ’s unrelenting invitation to all,” Bishop McElroy said.

He added that this effort would also “undermine the tremendous work that our priests and lay leaders are doing in emphasising the importance of every Catholic returning to full and active participation in the liturgy of God.”

What Should I Do If I Drop the Host?
Share