Priests finding solace in sacred may be vulnerable to mafias 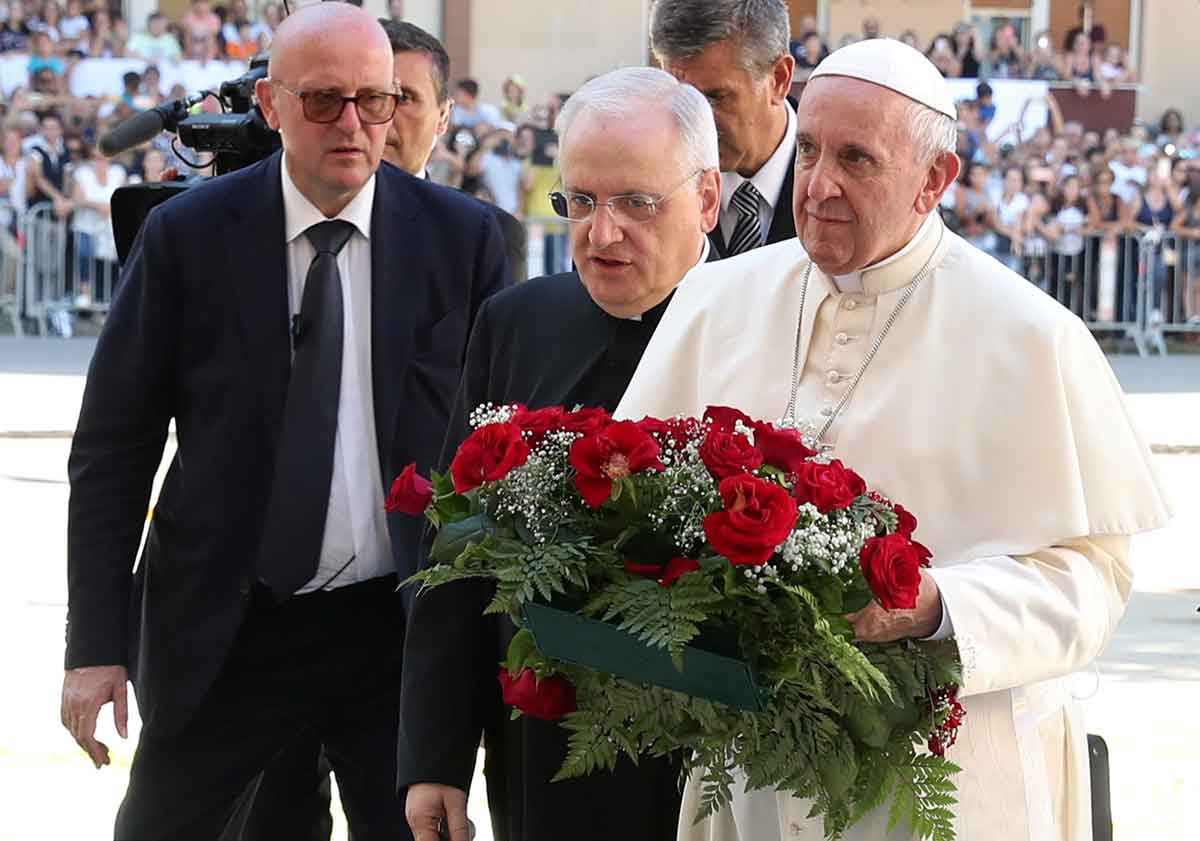 Pope Francis presents flowers as he visits the site where Father Pino Puglisi was killed by the Mafia in 1993, during his visit to Palermo, Italy, in this Sept. 15, 2018, file photo. A new department at the Pontifical Marian International Academy is dedicated to the “analysis, studying and monitoring of criminal and mafia-related phenomena.” (CNS photo/Tony Gentile, Reuters)

By Carol Glatz – Young members of the clergy who are tempted to avoid the complex realities of the world — finding solace and safety instead in the sacred — can be vulnerable to the illusions of the mafia, said the priest heading a new department on the Mafia and other criminal networks.

“The temptation for the young cleric is to close his eyes, to be content, not with the smell of sheep, but with the fragrance of incense, and the first to offer that aroma of incense are the mafias,” said La Salette Missionary Father Gian Matteo Roggio, head of the new department at the Pontifical Marian International Academy.

“The mafias are the first to erase the smell of sheep because, for the mafia, those sheep simply don’t exist, they are simply manpower,” like slaves without a soul and with no dignity, he said in his talk.

The priest, provincial superior of the La Salette Missionaries, was one of a dozen speakers at a news conference May 13 promoted by the department the pontifical academy established last year to promote the “analysis, study and monitoring of criminal and mafia-related phenomena.”

The department combines the efforts and expertise of state prosecutors and law enforcement as well as bishops, church experts and academics from papal institutions to offer free courses, seminars, resources and outreach. The department aims at promoting “a theology of liberation from the Mafia,” according to the academy’s website, particularly teaching the true role of Mary, which is often distorted by the Italian Mafia as being a model of blind submission to higher powers.

Father Roggio said one of the department’s goals is to repair a distortion of the sacred in which Christianity is “reduced to just one aspect, that of prayer, and where the Lord of prayer is the clergy.”

This so-called “culture of the sacred” is clericalism and the sacred “walking hand-in-hand,” he said, and it is “something which captivates young clergy.”

A reason for this attraction, he said, is due to the sheer number and weight of so many problems and difficulties in the world, and how easy it is to feel unable or inadequate to fight or fix them.

The ongoing, seemingly permanent nature of these problems can lead people to think nothing will ever change or nothing can be done, he said.

“Before all these difficulties of life the culture of the sacred tries to offer a kind of escape” rather than a path for seeking possible solutions; however, it is an easy out that becomes the denial of or a distancing from reality, he added.

The second objective of the department is to then contribute to and promote a healthier culture based on relationships that build people up, save them from self-centred individualism, offer different perspectives and create community, Father Roggio said.

Another speaker at the conference, held online and in-person at Rome’s Museum of Civilizations, was Giuseppe Pignatone, president of the Vatican City State tribunal; he had served as Rome’s chief prosecutor and spent years leading investigations into political corruption and organised crime.

He said all too often people believe fighting the Mafia is only up to the police, the courts and the state, but it is very important the church and all of society see that they have to help, too.

Everyone can help by breaking the silence, he said, and the church can help demystify its power, especially as it hides behind religion and worship.

The public outcry of the popes makes a real difference, he said, recalling the day of St. John Paul II’s funeral in 2005. Just as the event was being televised around the world, Italian investigators were wiretapping a major Sicilian mafia boss, Pignatone said.

As the boss stared at the coffin on TV he said on the phone, “what a poor guy, apart from that nonsense in Agrigento,” where the pope had railed against the Sicilian mafia in 1993, a sign, Pignatone said, that his unexpected and harsh denunciation had hit hard and “still burned.”

Many church heroes have worked to offer alternatives to Mafia affiliation for younger generations, he said, pointing to Father Pino Puglisi, a priest gunned down by the Mafia in 1993. Investigators heard one of the reasons the Mafia killed him was precisely because “he led those kids away,” opening an oratory to show them there was another way of life.

A Saint for Our Times