Archbishop of Vancouver Promises Transparency in Deaths of Children 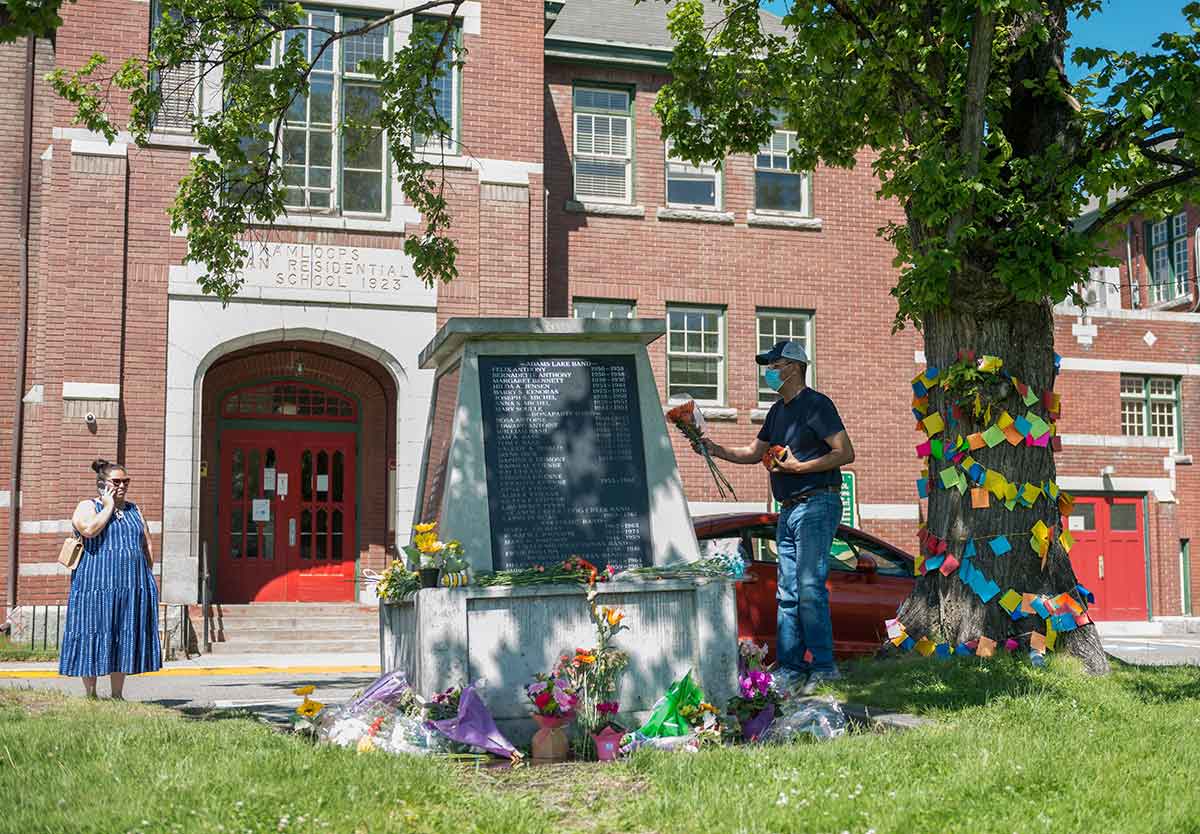 A man places flowers on a memorial in front of the former Kamloops Indian Residential School in British Columbia on May 29, 2021. Indigenous leaders and residential school survivors in Canada are calling on officials to conduct a thorough investigation of every former residential school in the country after the remains of more than 200 children were found on the grounds of the former Kamloops school. (CNS photo/Dennis Owen, Reuters)

Archbishop J. Michael Miller of Vancouver announced a plan to offer increased support and transparency to First Nations people in the wake of the discovery of an unmarked burial site near a former residential school in Kamloops, British Columbia.

“The church was unquestionably wrong in implementing a government colonialist policy which resulted in devastation for children, families, and communities,” Archbishop Miller said in a statement on June 2.

Archbishop Miller reiterated the apology he gave before the National Truth and Reconciliation Commission in 2013: “I wish to apologize sincerely and profoundly to the survivors and families, as well as to all those subsequently affected, for the anguish caused by the deplorable conduct of those Catholics who perpetrated mistreatment of any kind in these residential schools.”

Adding that apologies must be followed with concrete actions, the archbishop committed to five “first steps” to support First Nations people and others affected. They are:

– Being “fully transparent” with archdiocesan archives and records regarding all residential schools and encouraging other Catholic and government organisations to do likewise.

– Offering and supporting mental health support and counselling for people whose loved ones may be buried at the Kamloops site.

– Offering assistance with “technological and professional support” to help Tk’emlúps te Secwépemc and other First Nations people affected to honour, retrieve, and remember their children in whatever way they choose.

– Committing to supporting the same for all First Nations where Catholic-run residential schools were located within the historical bounds of the Vancouver Archdiocese.

– Renewing efforts to listen to Indigenous people about how best to walk together “along the path of justice.”

“Each time new evidence of a tragedy is revealed, or another victim comes forward, countless wounds are reopened, and I know that you experience renewed suffering,” he said.

“We recognise that there is so much work that remains to be done, yet we hope that, if we persevere in these commitments with humility, we can restore the trust among us that will bring healing.”

The Tk’emlúps te Secwépemc First Nation reported May 30 the discovery of an estimated 215 bodies in an unmarked grave at the site of the former Kamloops Indian Residential School. Chief Rosanne Casimir said there was a “knowing” in the community that was recently confirmed by ground-penetrating radar.

The school opened in 1890 and run by Catholics and the Canadian federal government. The federal government took over administration in 1969 and ran it as a residential building for students at day schools. It was closed in 1978.

Catholic bishops across Canada as well as two religious orders — the Missionary Oblates of Mary Immaculate and Sisters of St. Ann — have expressed sadness over the news.

Archbishop Donald Bolen of Regina, Saskatchewan, offered an apology “for the hurt that actions and decisions of our church in the past have caused to Indigenous Peoples and in ways that we presently retraumatize by our actions and inaction.”

“We have heard and acknowledge that apologies are not an end point but a starting point, and are learning how to walk in solidarity,” he said in a statement released June 2 by the archdiocese.

Referring to the Archdiocesan Truth and Reconciliation body established in 2017, Archbishop Bolen said the group has helped participants identify what work can be done in parishes and schools “in the joint pursuit of justice.”

“As an Archdiocese, we are striving to show our support and stand in solidarity with the Indigenous community,” the archbishop explained, citing efforts to connect with the “kohkums,” or grandmothers, and others who have been affected by the discovery of unmarked graves at residential school sites throughout Canada.

Acknowledging that such discoveries are “extremely retraumatising” to former residential school students, Archbishop Bolen said much work remains ahead. “We are in the process of consulting with Indigenous Elders and community leaders on how best to respond as a church,” he added.

He also pledged to broaden education efforts in the archdiocese “so that more and more people will come to know the history of Indigenous Peoples, the wisdom of their traditions and ways, the suffering they endured, the legacy of colonisation in today’s society, and ways of constructively walking together today.”

Is This the Holy Grail?