Pope Francis at the Angelus: Let Jesus look at and heal your heart 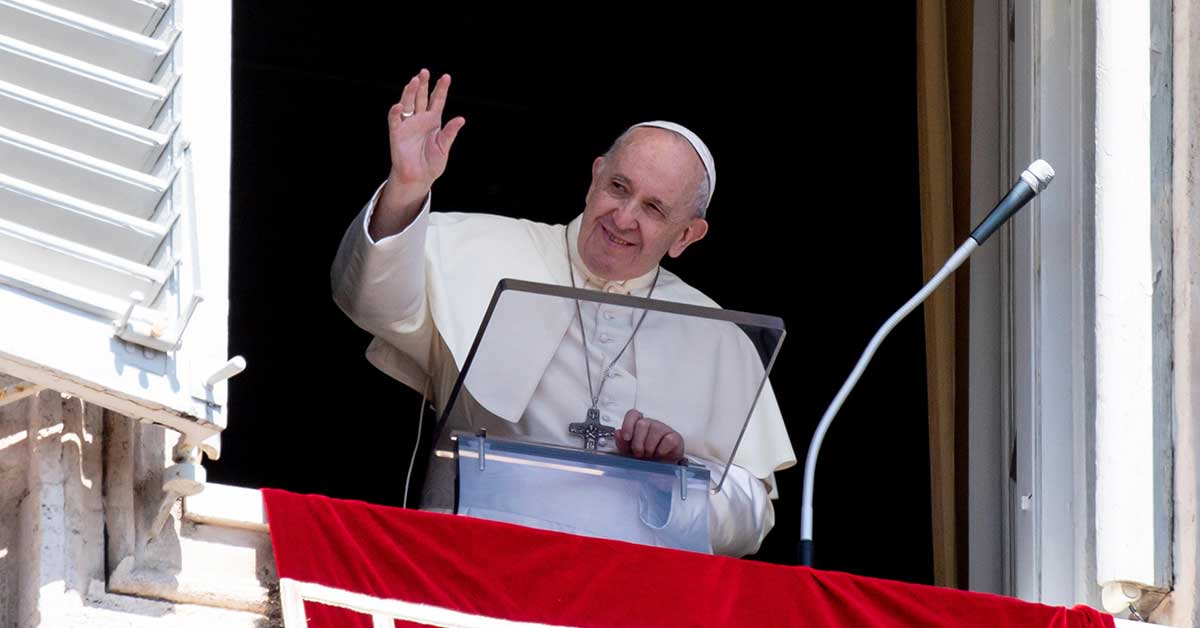 Pope Francis challenged people to “let Jesus look at and heal” their hearts in his Angelus address on June 27.

The pope said that intimacy with Jesus was the path to inner healing.

“And if you have already felt His tender gaze upon you, imitate Him; do as He does. Look around: you will see that many people who live beside you feel wounded and alone; they need to feel loved: take the step.”

He continued: “Jesus asks you for a gaze that does not stop at the outward appearance, but that goes to the heart; a non-judgmental gaze — let’s stop judging others – Jesus is asking us to gaze not judging, but welcoming. Let us open our hearts to welcome others. Because only love heals life.”

He reflected on the day’s Gospel reading, Mark 5:21-43, in which Jesus heals a woman afflicted with haemorrhages for 12 years.

The pope suggested that the woman’s suffering was not merely physical, but also emotional.

“More than her health, her affections were compromised. Why? She had blood loss and therefore, according to the mindset of the time, she was deemed impure. She was a marginalized woman,” he said.

“She could not have stable relationships, a husband, a family, and normal social relationships because she was ‘impure,’ a disease that made her ‘impure.’ She lived alone, with a wounded heart.”

The pope argued that life’s greatest disease was not cancer, tuberculosis, or the coronavirus.

“No,” he said, “The most serious illness in life is a lack of love, and not being able to love. This poor woman was sick, yes, of blood loss, but, as a consequence, of lack of love, because she could not be with others socially. And the healing that matters most is that of the affections.”

He said that everyone could see themselves in the nameless woman.

“The text says that she had tried many treatments, ‘had spent all that she had, and was no better but rather grew worse,’” he said.

“We too, how often do we throw ourselves into mistaken remedies to sate our lack of love? We think that success and money make us happy, but love cannot be bought, it is free. We hide in the virtual, but love is tangible.”

“We do not accept ourselves as we are and we hide behind external facades, but love is not an appearance. We look for solutions from magicians, from gurus, to then find ourselves without money and without peace, like that woman.”

He explained that the woman finally found healing by touching Jesus’ garment, entering into direct, physical contact with him.

“Especially in this time, we understand how important contact and relationships are. The same counts with Jesus: at times we are content to observe some precepts and to repeat prayers – many times like parrots – but the Lord waits for us to encounter him, to open our hearts to him, for us, like the woman, to touch his garment in order to heal. Because, by becoming intimate with Jesus, we are healed in our affections,” he said.

The pope stressed that the Gospel story showed that Jesus welcomed direct contact because it recorded that he looked around the crowd to see who had touched him.

“This is Jesus’ gaze: there are many people, but He goes in search of a face and a heart full of faith. He does not look at the whole, as we do, but at the individual. He does not stop at the wounds and mistakes of the past, but goes beyond sins and prejudices,” he commented.

He said that Christ also looks beyond our sins to heal us, while we often judge others based on appearances and speak ill of them.

In the gospel story, he said, Jesus healed the woman, tenderly calling her “daughter,” praising her faith and restoring her self-confidence.

After praying the Angelus, Pope Francis noted that June 29 marks the Solemnity of Ss Peter and Paul. The apostles, who were martyred in Rome, are the patron saints of the Eternal City and the day is a regional public holiday.

“Today, as we approach the Feast of Ss Peter and Paul, I ask you to pray for the pope. Please pray in a special way: the pope needs your prayers! Thank you. I know you will do so,” he said.

The pope observed that Catholics in the Holy Land marked the inaugural annual “Peace Day for the East” on Sunday.

He said: “May the Lord support the efforts of all those who are working for dialogue and fraternal coexistence in the Middle East, where the Christian faith was born and is alive, despite suffering. May God grant those beloved peoples constant strength, perseverance, and courage.”

He offered his condolences to the families of victims of a tornado in the Czech Republic that killed five people and injured more than 150 others on June 24.

“I pray for the dead and injured and for those who have had to leave their homes, which have been seriously damaged,” he said.

Finally, he greeted locals and pilgrims to Rome.

“May your visit to the tombs of Sts. Peter and Paul strengthen your love for Christ and for the Church,” he said, before wishing those in the square below a happy Sunday.