Pope: The Lowliest of Sinners Can Become the Greatest of Apostles 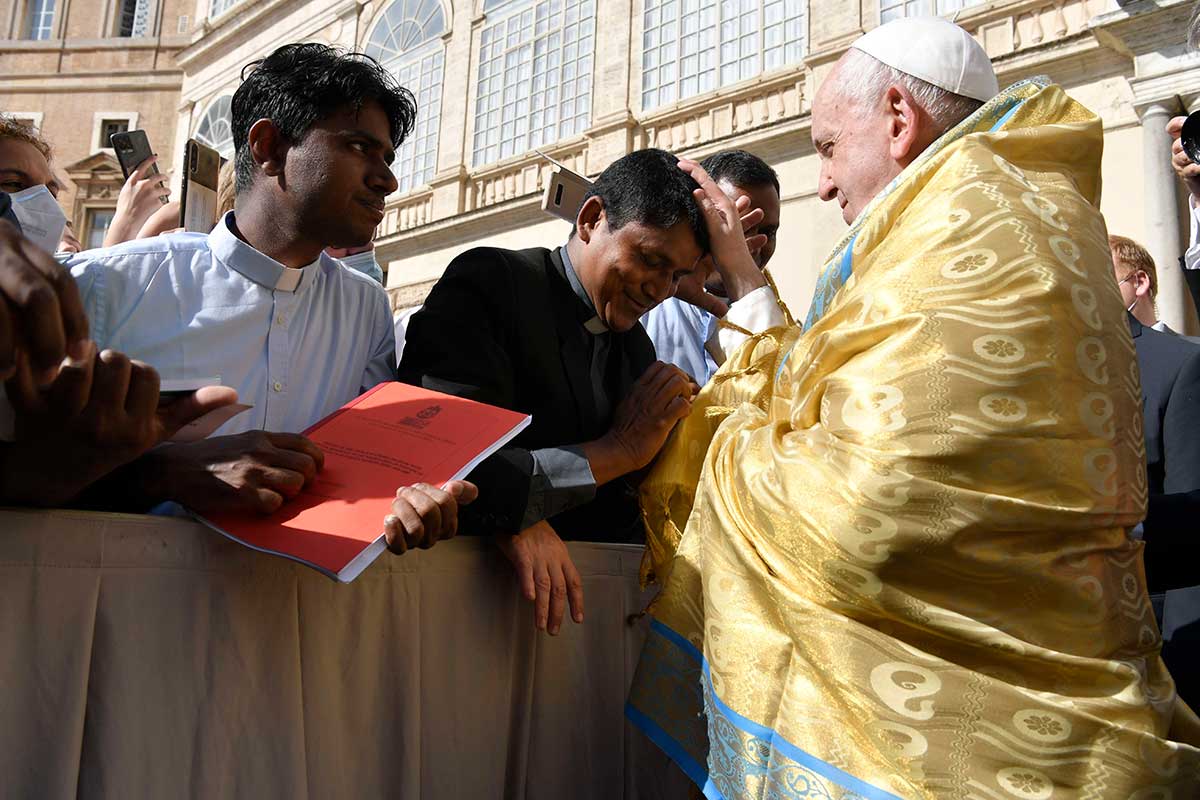 Pope Francis, accepting the gift of a shawl, blesses a priest during his general audience in the San Damaso Courtyard of the Apostolic Palace at the Vatican on June 30, 2021. The pope continued his series of audience talks focused on the Letter to the Galatians and reflected on St. Paul’s life and the power of God’s grace. (CNS photo/Vatican Media)

By Junno Arocho Esteves – Even the lowliest of sinners can become the greatest of apostles by answering God’s call and allowing his grace to work in their heart and mind, Pope Francis said.

The life of St. Paul, who went “from being a persecutor of Christians for not observing the traditions and the law” to being one of the great apostles, highlights the power of God’s grace, the pope said June 30 during his weekly general audience.

“How often, in the face of the Lord’s great works, does the question arise: How is it possible that God uses a sinner, a frail and weak person, to do his will? And yet, none of this happens by chance, because everything has been prepared in God’s plan. He weaves our history and, if we correspond with trust to his plan of salvation, we realize it,” he said.

Arriving in the San Damaso Courtyard of the Apostolic Palace, the pope took his time greeting pilgrims and blessing newlyweds. Before concluding the audience, the pope also took time to thank his personal driver, Renzo Cieci, who was retiring.

“He began working when he was 14 years old, riding a bicycle. Today, he is the pope’s driver. Let us applaud Renzo and his faithfulness. He is one of those people who bring the church forward with his work, with his goodness and with his prayers. I thank him so much, and I also would like to take the opportunity to thank all the laypeople who work here at the Vatican,” the pope said.

In his main audience talk, the pope continued his new series of talks on the Letter to the Galatians, reflecting on the theme, “Paul, true apostle.”

St Paul shows “a father’s concern” for the Christian community, he said, and in reading his Letter to the Galatians, “we immediately discover that Paul has a profound knowledge of the mystery of Christ.”

When problems arise, such as the dispute over whether Gentiles must be circumcised, St. Paul did not follow “the shallow arguments used by his detractors” but instead “chose to go deeper, because what was at stake was the truth of the Gospel and the freedom of Christians.”

“He does not stop at the surface of the problems, as we are often tempted to do in order to find an immediate solution that deludes us into thinking that we can all agree with a compromise,” the pope said. “This is not how the Gospel works, and the apostle chose to take the more challenging route.”

One of the ways St Paul explains his reasoning is by reminding the Galatians of his history of violent persecution against Christians and “that he is a true apostle not by his own merit, but by God’s calling.”

“On the one hand, he insists on underlining that he had fiercely persecuted the church and that he had been a ‘blasphemer, a persecutor and a man of violence,’ the pope said. “On the other hand, he highlights God’s mercy toward him, which led him to experience a radical transformation, well known to all.”

Pope Francis said St. Paul’s “wonder and gratitude” despite his past showed that, through the grace of God, even one who fought the disciples of Christ “could become a herald among the Gentiles.”

“The call always implies a mission to which we are destined; that is why we are asked to prepare ourselves seriously, knowing that it is God himself who sends us and supports us with his grace,” the pope said. “Let us allow ourselves to be led by this awareness: The primacy of grace transforms existence and makes it worthy of being placed at the service of the Gospel.”