As anniversaries approach, Japan’s bishops call for prohibition of nukes 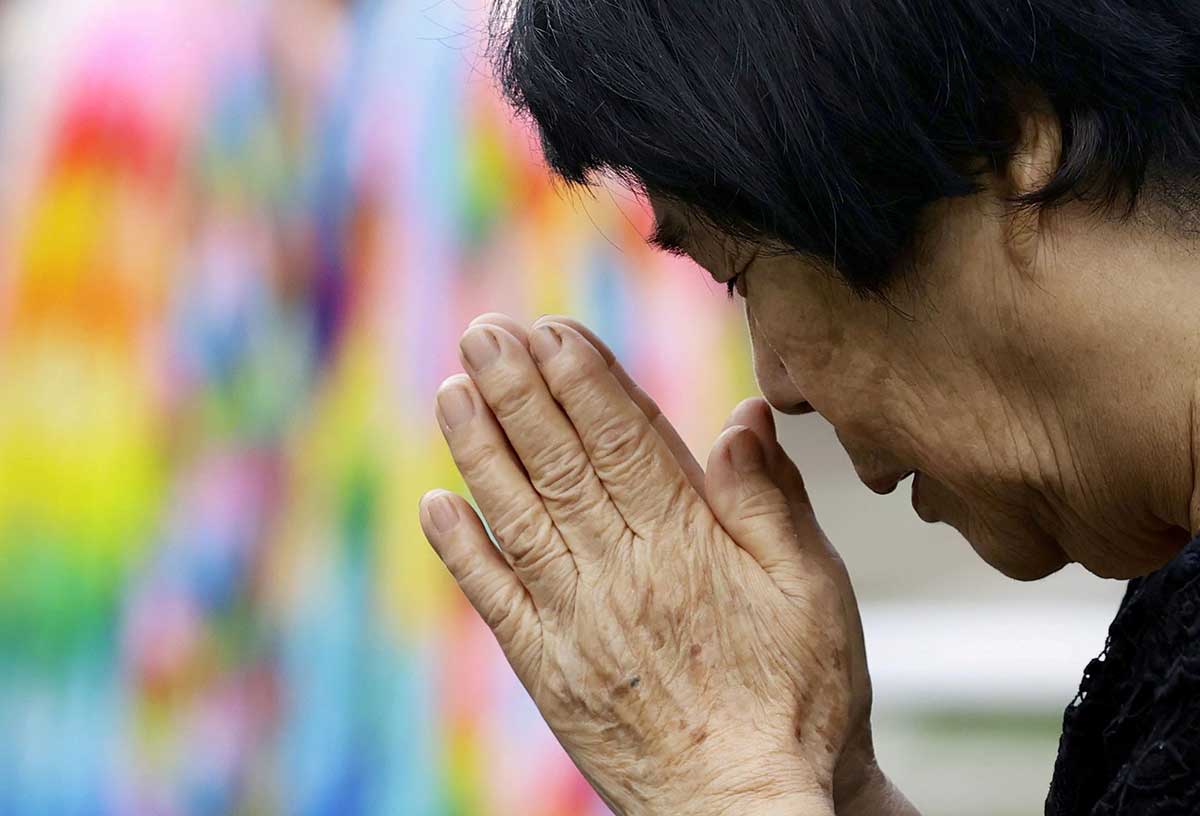 A woman prays for victims of the 1945 atomic bombing at Nagasaki’s Atomic Bomb Hypocenter Park in Japan on Aug. 9, 2020, the 75th anniversary of the bombing. Catholic bishops in Japan are calling for the prohibition of nuclear weapons as they announce a 10-day prayer program marking the anniversary of the Hiroshima and Nagasaki bombings. (CNS photo/Kyodo, Reuters)

Catholic bishops in Japan called for the prohibition of nuclear weapons as they announced a 10-day prayer program marking the anniversary of the Hiroshima and Nagasaki bombings.

“Protecting all life makes peace,” said the message from Archbishop Mitsuaki Takami of Nagasaki, president of the Catholic Bishops’ Conference of Japan, announcing the prayer program that will run Aug. 6-15.

Ucanews.com reported that each year from the date of the Hiroshima bombing, Aug. 6, to Aug. 15, when Japan surrendered in World War II, the church marks Ten Days of Prayer for Peace with special prayers, workshops and other activities directed toward peace.

“As we once again this year mark the Ten Days of Prayer for Peace by reflecting about peace, praying for peace and acting for peace, I want to share with you my conviction that protecting all life is the way to peace,” said Archbishop Takami’s message, published on the bishops’ conference website.

The message called for more nations to ratify the Treaty on the Prohibition of Nuclear Weapons, which entered into force on Jan. 22.

Several countries, including nuclear powers and countries like Japan under the “nuclear umbrella,” refuse to ratify the treaty, claiming it is unrealistic.

Japan, the only country to suffer atomic bombings, “should be among the first to ratify the treaty. I pray that many non-nuclear countries will ratify the treaty” and put pressure on others to do so, Archbishop Takami said.

Besides armed conflicts and the plight of refugees, a new Cold War confrontation between the United States and China is having “a significant negative impact on the political and economic stability of the international community,” the message noted.

Noting that that confrontation between nations and weapons of mass destruction threaten peace, the message asked nations to make “make patient efforts to build better relations.”

Ucanews.com reported the archbishop cited the situations of Myanmar and Afghanistan, where oppressive regimes ignore human rights and people are forced to live without peace.

“Are we sacrificing people to claims of national security and prosperity?” he asked.

The peace message also asked prosperous nations to support poorer countries during the COVID-19 pandemic. The virus had infected more than 189 million people as of mid-July and more than 4 million had died.

“Poorer countries are being put on the back end of vaccine allocation, increasing the risk to life and social disruption. We are all suffering. Prosperous nations must understand, help and support poorer ones,” Archbishop Takami said.

He asked for the protection of all life to be prioritized in every situation.

“In doing that, we hope to create peace. And life is more than individual life; we must keep in mind that our lives are interconnected.”

“Peace is the state in which individual lives are fulfilled, there is harmony, and all life is filled with happiness,” the message said.