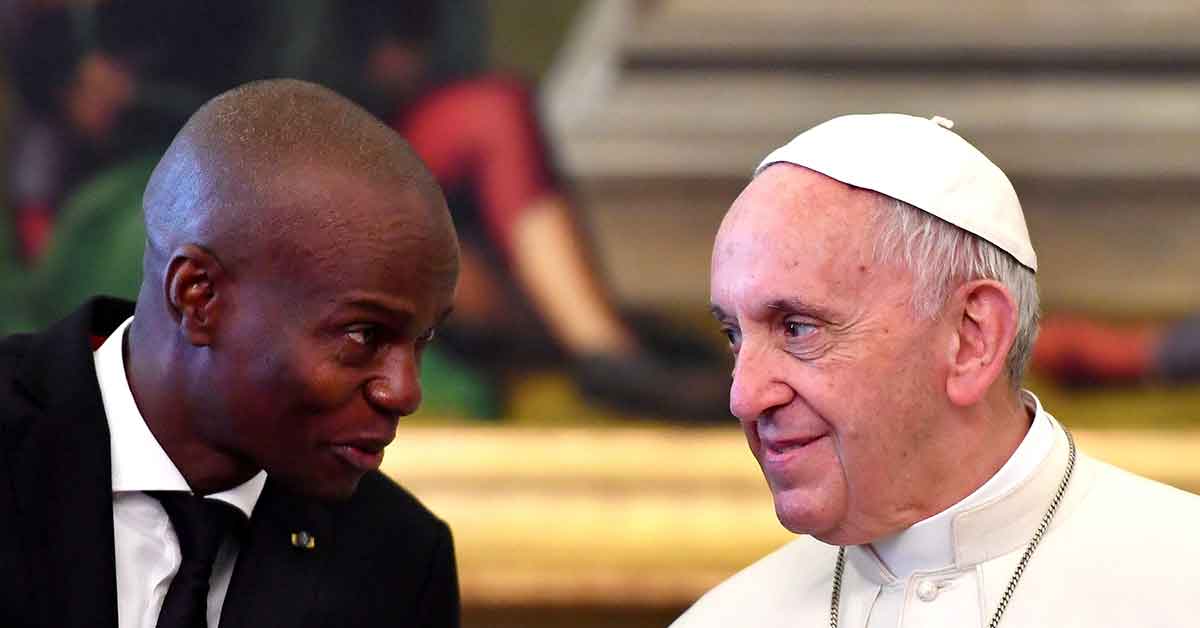 Pope Francis talks with Haitian President Jovenel Moïse during a private audience at the Vatican Jan. 26, 2018. The president was assassinated in an attack in the early hours of July 7, 2021, at his home outside of the capital, Port-au-Prince, the prime minister said. (CNS photo/Alberto Pizzoli, pool via Reuters)

“We bishops must not only call for calm, but also for all Haitians to sit down together, change the way they look at each other, and seek together the way forward,” the bishop told Vatican News hours after the Haitian president was gunned down by unknown assailants in the bedroom of his residence early July 7. His wife, Martine Moïse, was injured in the attack. The Associated Press reported she was in stable condition.

Bishop Quesnel said the assassination presents an opportunity for a “change of mentality” and a “real conversion.”

The last assassination of a Haitian president took place in 1915 and led to a 19-year occupation by U.S. troops. But the bishop said there had been several warning signs that a similar tragedy could occur and described the previous months as “chaotic” ones that called for prudence and careful judgement.

Tensions had been building in the Caribbean nation for several months, Bishop Quesnel said, with the rise of violent activities of armed gangs that U.N. sources say have displaced almost 15,000 people from poor neighbourhoods of Port-au-Prince. Human rights organisations say these armed gangs are linked to different politicians, including the executive government.

Kidnappings for ransom by these gangs have skyrocketed in recent months, with 91 people documented kidnapped in April 2021. Among them were seven priests, including two French nationals abducted in broad daylight as they drove in a convoy to the ordination of a new priest.

The takeover by gangs of the poor neighbourhood of Martissant, situated on the road that leads to southern Haiti, has more or less cut off half of the country from the capital. On July 4, six people, including two U.S. Protestant missionaries, were killed when a small plane crashed while flying from Port-au-Prince to the southeastern city of Jacmel, in an attempt to avoid Martissant.

Moïse had been ruling by decree since January 2020, when the terms of most senators and deputies ended. In a June statement, the bishops’ conference opposed an unpopular general referendum called by Moïse. The bishops said such a referendum would be impossible in the current context of paralyzing crime and extreme sociopolitical unrest.

“When one holds the reins of power, a certain measure of flexibility and humility is necessary,” Bishop Quesnel reflected, echoing a broad range of civil society groups that compared the Moïse government to a dictatorship. “To exercise power in this day and age means to let go of rigid positions and to listen closely and attentively to other parties.”

“The bishops’ conference now has an important role to play in the instillment of Gospel values, so that people can learn to look at each other face to face and see the nation,’ Bishop Quesnel said. “Otherwise, we are going to continue to be stuck in this situation.”

The assassination sent shockwaves through the country.

Fiammetta Cappellini, Haiti country representative for the Milan-based AVSI, said the afternoon of July 7: “The country has come to a stop. Traffic has been halted and the borders are closed. Nobody is leaving their homes.”

She, too, cited recent instability due to violence from armed gangs.

“The opposition to this president was very strong,” Cappellini said. “As a humanitarian NGO, we are very concerned about the population, especially those who live in the most vulnerable neighbourhoods and areas. In these areas, a large part of the population depends on humanitarian aid, which is now suspended, and we do not know when the organizations will be able to continue their operations because we must be able to guarantee the safety of our staff before resuming activities.”

“Nou Pap Domi” (We Never Sleep), a citizen watchdog group that has campaigned against corruption and called for Moïse to step down, condemned the assassination and offered condolences to his family.

“We note that blood just never stops flowing in this country. No one, no sector of society is spared from such assassinations,” the group said. “We are sending out an SOS to protect life and to protest against the disregard for human life in Haiti. We cannot continue to count bodies every day. Impunity must end, every murder victim must find justice and those guilty must go to prison.

“We must come together and allow the country to breathe. Too much blood has flowed,” the group said