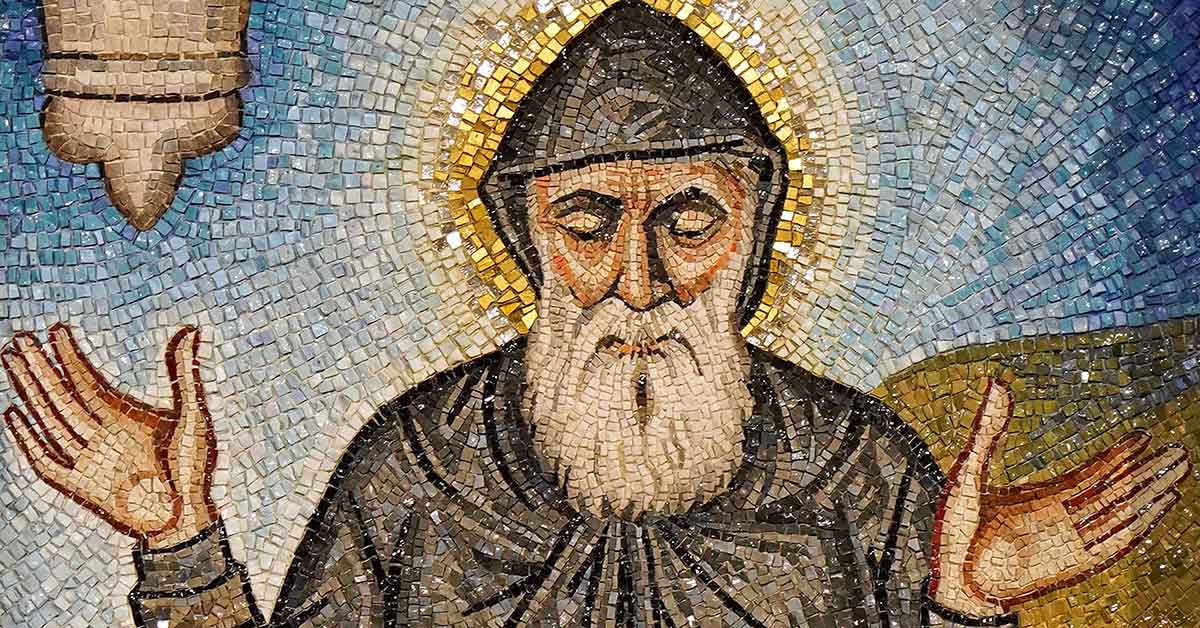 St Charbel Makhlouf is depicted in a mosaic at St. Patrick’s Cathedral in New York City. Cardinal Bechara Rai, Maronite patriarch, is imploring the intercession of St. Charbel for Lebanon to overcome its numerous social and political challenges. (CNS photo/Gregory A. Shemitz)

By Doreen Abi Raad – Cardinal Bechara Rai, the Maronite patriarch, pleaded for the intercession of Lebanon’s beloved St. Charbel Makhlouf as the beleaguered country spirals deeper into collapse, further roiled by the resignation of the prime minister-designate.

“Today on the feast of St Charbel, saint of Lebanon, we believe that he will not let Lebanon fall apart,” Cardinal Rai said July 18 in his homily from Diman, the patriarchal summer residence in northern Lebanon.

Lebanon is in the throes of an economic upheaval, caused by decades of corruption and mismanagement, that has decimated the once-prevalent middle class.

“To you we entrust our homeland,” Cardinal Rai prayed to the saint, asking for the miracle of “salvation from this total collapse.”

The cardinal pleaded for the rapid appointment of a new prime minister-designate “capable of facing the challenges” of Lebanon in the midst of the socioeconomic and political crisis.

Lebanon has been without an active government since August after the resignation of the previous government in the wake of the deadly explosion in the port of Beirut. Prime Minister-designate Saad Hariri stepped down July 15, nine months after he was tasked with forming a new cabinet, citing political gridlock and key differences with President Michel Aoun.

Cardinal Rai has relentlessly pressed for the formation of a government, and has called for active neutrality of Lebanon and for an international conference under the auspices of the United Nations to address the crisis.

The national currency has lost nearly 100% of its value since late 2019, pushing more than half the population into poverty.

The World Bank has termed Lebanon’s devastated economy as one of the three worst crises worldwide since the mid-19th century. A recent UNICEF report said more than 30% of children in Lebanon are going hungry, while 77% of households do not have enough money to buy sufficient food.

The crisis has worsened dramatically in recent weeks as the population grapples with fuel, electricity and medicine shortages.

“In the name of the impoverished, humiliated and hungry people … and of our nation which is collapsing, we call on all the political forces to join efforts under their national responsibility, consult among each other, and name in the upcoming parliamentary consultations a Sunni figure for the prime minister post who would be at the level of the current challenges,” Cardinal Rai urged.

Under Lebanon’s sectarian power-sharing system, the president must be a Maronite Catholic, the prime minister a Sunni Muslim and the speaker of parliament a Shiite Muslim.

“It is the time for shouldering responsibilities, not retreating, as the country is not facing an ordinary governmental crisis but rather an all-out national crisis that requires the unification of everyone’s efforts,” Cardinal Rai said.

Denouncing the politicians, the cardinal said they “prove every day that they are incapable of meeting their smallest obligations.”

He called on politicians to “rise above their selfishness, personal interests and narrow electoral calculations that are unfortunately controlling the minds of the majority of political forces at the expense of the higher national interest.”

Cardinal Rai was one of the nine Catholic, Orthodox and Protestant religious leaders of Lebanon who met with Pope Francis July 1 for a summit for Lebanon.

In his concluding statement on July 1, Pope Francis declared: “Lebanon cannot be left prey to the course of events or those who pursue their own unscrupulous interests. It is a small yet great country, but even more, it is a universal message of peace and fraternity arising from the Middle East.”