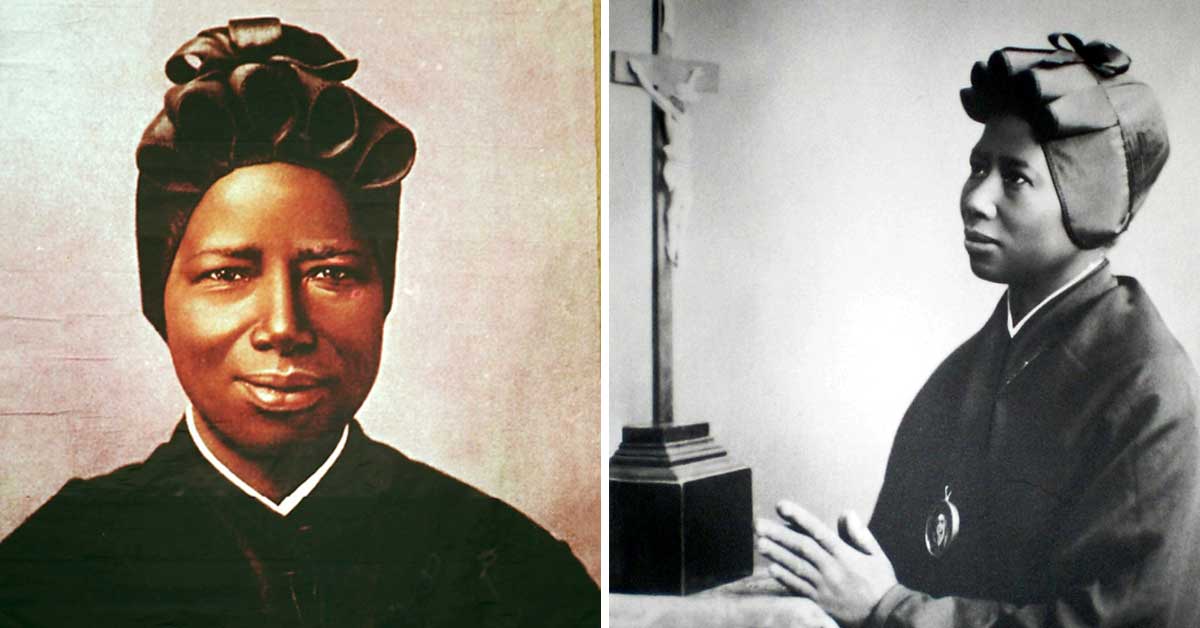 St Josephine Bakhita at a glance

Abducted as a little girl, St Josephine Bakhita was tortured and mutilated during her 12 years of slavery. In freedom, she became a nun.

Many years after she had been abducted and sold into slavery, St Josephine Bakhita was asked what she would do if she met her captors again. She replied: “If I were to meet those who kidnapped me, and even those who tortured me, I would kneel and kiss their hands. For, if these things had not happened, I wouldn’t be a Christian and a religious today.”

It is for this level of forgiveness that St Josephine was canonised by Pope John Paul II in 2000. But it is for the manner of survival that she is the patron saint of people who have been trafficked. The International Day of Prayer for Victims of Human Trafficking falls on February 8, St Josephine’s feast day.

St Josephine Bakhita was born in around 1869 in the village of Olgossa, in the Darfur region of what is now Sudan. Due to the trauma which she would experience, she forgot her birthname. But she did recall that her father was relatively well off, and that she had three brothers and three sisters, including a twin. “I lived a very happy and carefree life, without knowing what suffering was,” she would later recall. That changed when she was six: Arab slavetraders abducted her sister. “I remember how much mom was crying and how much we too were crying.”

Two years later, foreign slavetraders caught her while she was walking with a friend around fields outside her village. Renamed Bakhita (Arabic for “fortunate”), the girl and other slaves were forced to walk barefoot the 960km to El-Obeid. At one point she escaped, but the man who seemed to help Bakhita just sold to other slavetraders.

In El-Obeid, Bakhita was first bought by a rich Arab who used her as a maid for his two daughters. She was treated well until she fell foul of the owner’s son, who whipped and kicked her so severely that she spent more than a month unable to move. The next owner, her fourth, was a Turkish general. His wife and mother-in-law were cruel to their slaves. St Josephine would recall: “During all the years I stayed in that house, I do not recall a day that passed without some wound or other. When a wound from the whip began to heal, more blows would pour down on me.”

But her most terrifying memory was being marked as a slave by scarring. Some 114 intricate patterns were cut into her breasts, belly and right arm, and salt poured into the wounds for a month to widen them. “I felt I was going to die any moment, especially when they rubbed my wounds with the salt.”

Throughout the ordeal, Bakhita would recall, she felt “a mysterious strength within me that always sustained me”. Later she realised that it was God with her all the time.

In 1882 the Turkish general and his vicious family had to flee Sudan. Bakhita was bought in Khartoum by the Italian vice-consul Callisto Legnani. He treated her kindly. When Legnani himself had to return to Italy, Bakhita begged to go with him. He consented.

Safely arrived in Italy, Legnani turned ownership of Bakhita to the Michieli family, who took her to the family villa at Zianigo, near Venice. For three years Bakhita served as nanny to the Michielis’ daughter Alice, known as Mimmina, who was born in 1886.

Shortly after, Bakhita returned with the family to Africa for nine months. When the Michielis decided to buy a hotel at the Red Sea in Sudan, they left Mimmina with Bakhita in the care of the Canossian Sisters. It was there that Bakhita encountered Christianity for the first time. “Those holy mothers instructed me with heroic patience and introduced me to that God who from childhood I had felt in my heart without knowing who he was,” she later wrote.

When the Michielis were ready to move permanently to Sudan in 1889, Bakhita refused to go with them. Backed by the Sisters, the case went to the courts. The court ruled that she had never been legally enslaved according to Italian, British or Egyptian law. After 12 years as a slave, she would now be a free woman. A year later, Italy formally abolished slavery.

As a free woman, Bakhita chose to remain with the Canossians. On January 9, 1890, she was baptised and confirmed with the names of Josephine Margaret Fortunata (the latter being a Latin translation of Bakhita).

Almost four years later, on December 7, 1893, Josephine Bakhita entered the novitiate of the Canossian Sisters, making her vows in 1896. In 1902 she was transferred to the Canossian convent at Schio, in the northern Italian province of Vicenza. She would be based there for the rest of her life. She worked mostly as a cook, seamstress, sacristan and porter.

Sr Josephine was known for her gentle voice and ready smile, as well as her personal holiness and charisma. Her remarkable story was first recorded in a biography, published in 1931, which made her famous throughout Italy. From 1935-39 she visited other Canossian communities in Italy to talk about her experiences and to help prepare young Sisters for work in Africa. She disliked travelling and being displayed as a novelty, but she also encouraged the missionary work, and prayed that her family might be baptised.

During World War II, the people of Schio already considered Sr Josephine a living saint whose mere presence would protect them from bombs. She could not prevent the bombings, but the war passed Schio by without a single casualty. Bakhita had the gift of prophecy, and was also very witty. One night a fellow nun bumped into her in the convent corridor. “You are so black, I couldn’t see you in the dark,” said the Sister. Bakhita replied: “In the dark, you’re not white either.”

Bakhita suffered poor health and much pain in her last years, but even confined to a wheelchair, she was always cheerful. Asked how she was doing, she would reply: “As the Master desires.”

On her deathbed, the torment of her years as a slave revisited Sr Josephine. In a delirium, she cried out: “The chains are too tight; please loosen them a little!” When she awoke, one of the Sisters told her that it was a Saturday, the day of the week dedicated to the Blessed Virgin. “Yes, I am so happy: Madonna…Madonna!” Those were her last words.

Sr Josephine died at 20:10 on February 8, 1947, at the age of 77 (or 78). Thousands of people paid their respects as her body lay in state. Petitions for her sainthood cause began almost immediately, and her process officially commenced in 1959. Pope John Paul II beatified her in 1992, and canonised her on October 1, 2000. Since 1969, her tomb has been in the church of the Holy Family of the Canossian convent of Schio.

St Josephine Bakhita’s life is a sign of hope, of transformation from abject suffering to joy in Christ, of finding forgiveness even for the most heartless perpetrators of cruelty.

On February 10, 1993, Pope John Paul visited Sudan, where only nine months earlier news of St Josephine Bakhita’s beatification had been banned by the hardline Islamist regime. “Rejoice, all of Africa! Bakhita has come back to you,” the pope proclaimed. “The daughter of Sudan sold into slavery as a living piece of merchandise and yet still free. Free with the freedom of the saints!”