Study finds 221,000 Catholics left the Church in Germany during Pandemic 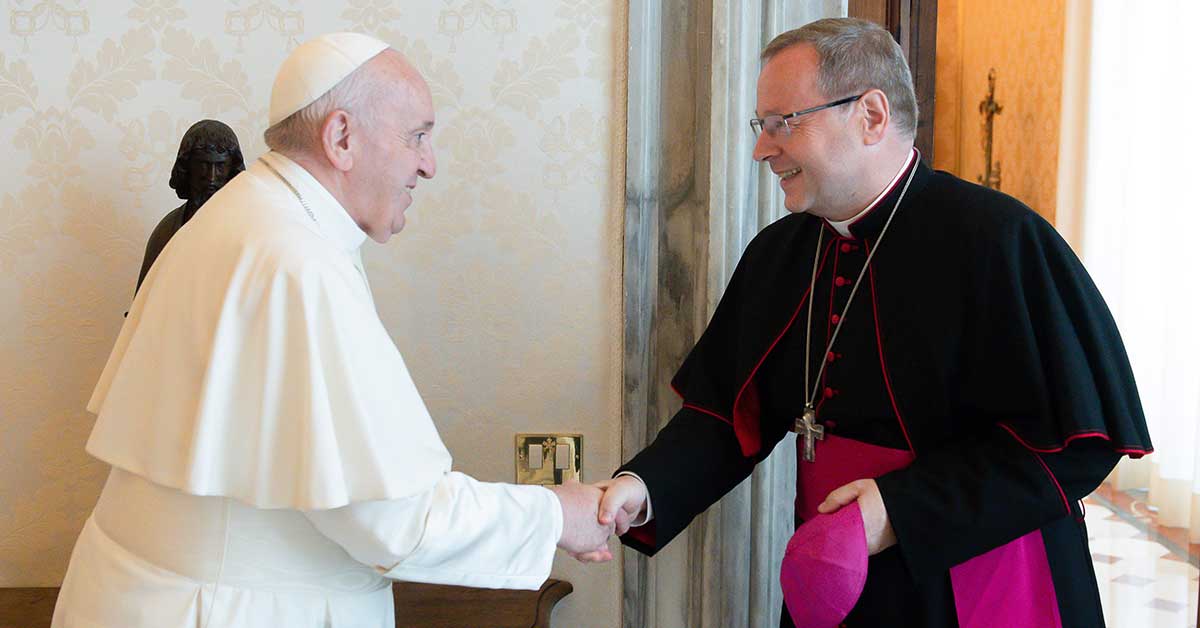 Pope Francis greets Bishop Georg Bätzing, president of the German bishops’ conference, during an audience at the Vatican June 24, 2021. Bishop Bätzing said he assured the pope that German Catholics do not want to split from the church. (CNS photo/Vatican Media)

In the year 2020, fewer Christians left the church in Germany than in previous years, two church organisations reported on Wednesday.

About 221,000 Catholics quit the church, while 220,000 left the Evangelical Church in Germany, a federation of 20 Lutheran, Reformed and United Protestant regional churches and denominations and known by its German acronym EKD, reported the German Catholic news Agency KNA.

The numbers represent a decline of about 20% from 2019, statistics showed.

Overall, the share of Christians in the population slipped slightly to 54%, but they still comprised by far the single largest religious community in Europe’s most populous nation.

As expected, the pandemic caused deep cuts in church life and in the income from church taxes, which are legally imposed on tax-eligible church members in Germany. The number of weddings in the Catholic Church last year fell to 11,018, from 38,537 in 2019. In the Evangelical Church, christenings fell by about 50% to 18,000.

The EKD’s tax revenues meanwhile fell by 5.4% to 5.6 billion euros (US$6.6 billion). The Catholic Church is to report its tax income figures later this summer.

COVID-19 has changed a great deal in the country’s social and church life, Bishop Georg Baetzing of Limburg, president of the German bishops’ conference, said. At the same time, he stressed that even during the pandemic, the church had been a presence particularly in the milestones of many people’s personal lives.

Bishop Baetzing said the number of people quitting the church was painful. Many had apparently lost trust and by quitting wanted to send a signal.

The questions about the reasons needed to be “openly and honestly” asked, saying, “This includes first and foremost a thorough reappraisal of sexual abuse cases. Linked to this is the issue of power and power-sharing in the church.”

The evangelical state churches in Wurttemberg and Westphalia, members of the EKD, released a study July 14 examining the motives of people quitting the church. The study said that decisive factors were a distancing from Christian faith and the church tax, which is commonly called a “membership fee.”

Most people questioned did not cite a concrete event for their move to quit, which apparently was the result of a longer process, the report said.

Regarding the issue of church taxes, the study revealed differing motives among respondents. Some people simply wanted to save money; others said they missed getting anything of value in return; others said they simply could not afford the tax.

The report cited age as a factor.

“Putting it pointedly, it can be said that persons over 40 years were somewhat more strongly moved to quit due to the behaviour of the church, while those under 40 years left because they had no relationship with the church and no longer knew what to do with their faith,” the study said.

In Germany, the church tax is a legally imposed levy on tax-liable church members. The money is deducted via the tax office, with the state keeping 3% for itself. The churches above all use tax income to finance their personnel in pastoral ministry as well as in schools and social institutions.