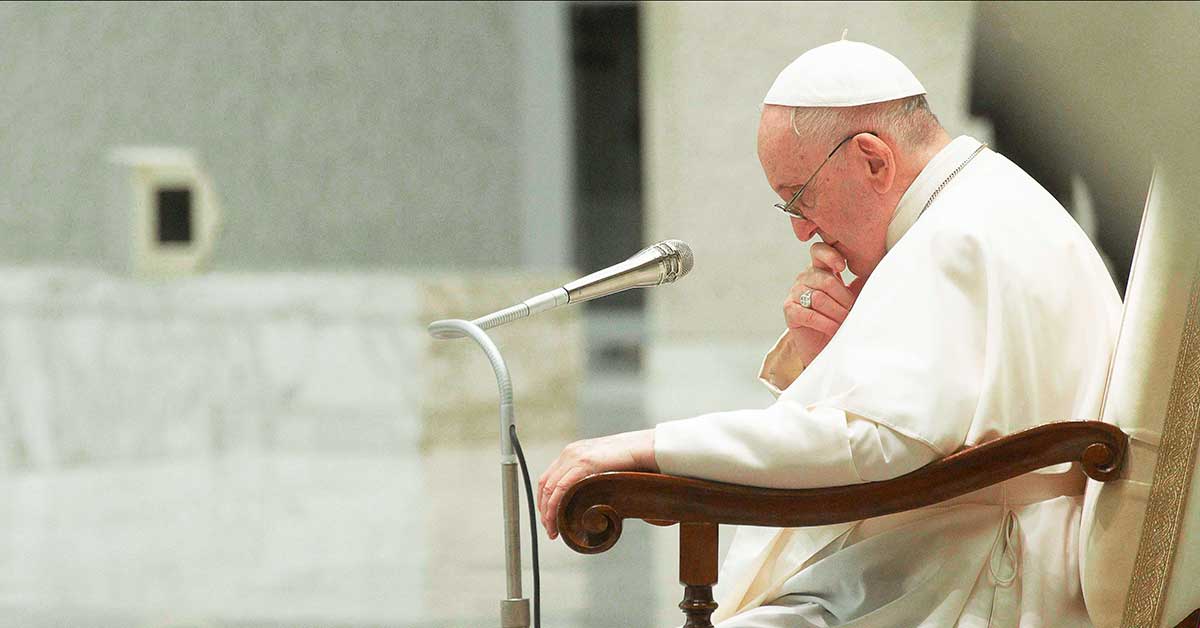 Pope Francis leads his general audience in Paul VI hall at the Vatican on Aug. 4, 2021. It was his first audience since undergoing colon surgery on July 4. (CNS photo/Vatican Media)

By Carol Glatz – The true Gospel has been revealed by Jesus Christ, not by individuals or founders of movements, Pope Francis said during his weekly general audience.

“With the truth of the Gospel, one cannot negotiate. Either you receive the Gospel as it is, as it was announced,” or one embraces something else, he said Aug. 4 to those gathered in the Paul VI audience hall at the Vatican.

“One cannot compromise. Faith in Jesus is not a bargaining chip; it is salvation, it is encounter, it is redemption. It cannot be sold off cheaply,” said the pope, as he led his first general audience since his colon surgery July 4 and after the usual suspension of general audiences for the month of July.

Continuing with a new catechesis series reflecting on St. Paul’s Letter to the Galatians, Pope Francis focused on the apostle’s insistence that the faithful be loyal to the Gospel Jesus preached and not be swayed by new missionaries who “wish to pervert the Gospel of Christ.”

St Paul understands the need to keep the young community safe from that which threatens its foundations, that is, a new “gospel,” which is “perhaps more sophisticated, more intellectual,” but which distorted “the true Gospel because it prevents (people) from attaining the freedom acquired by arriving at faith,” the pope said, emphasising the key here was “freedom.”

The true proclamation is “that of the death and resurrection of Jesus as the source of salvation,” he said. “Whoever accepts it is reconciled to God, is welcomed as a true son or daughter and receives the inheritance of eternal life.”

Instead, some of the Galatians seemed to be veering off onto another path: listening to new missionaries who think “that by circumcision they will be even more devoted to the will of God and thus be even more pleasing to Paul,” the pope said. They seem to be “inspired by fidelity to the tradition received from the fathers and believe that genuine faith consists in observing the law.”

St. Paul, therefore, seems unorthodox with regard to tradition, but he knows “that his mission is of a divine nature — it was revealed by Christ himself, to him” as something that is radically and always new, the pope said.

In this complicated situation, he said, “it is necessary to disentangle oneself in order to grasp the supreme truth that is most consistent with the person and preaching of Jesus and his revelation of the father’s love.”

“This is important: knowing how to discern,” he said. “Many times we have seen in history, and we also see it today, some movements that preach the Gospel in their own way, sometimes with their own real charisms; but then they exaggerate and reduce the entire Gospel to the ‘movement.'”

When that happens, it becomes a gospel of the founder and not of Christ, he said.

“It may help at the beginning, but in the end, it does not bear fruit with deep roots. For this reason, Paul’s clear and decisive word was salutary for the Galatians and is salutary for us too,” he said.

The pope said the true Gospel is “Christ’s gift to us; he himself revealed it to us. It is what gives us life.”