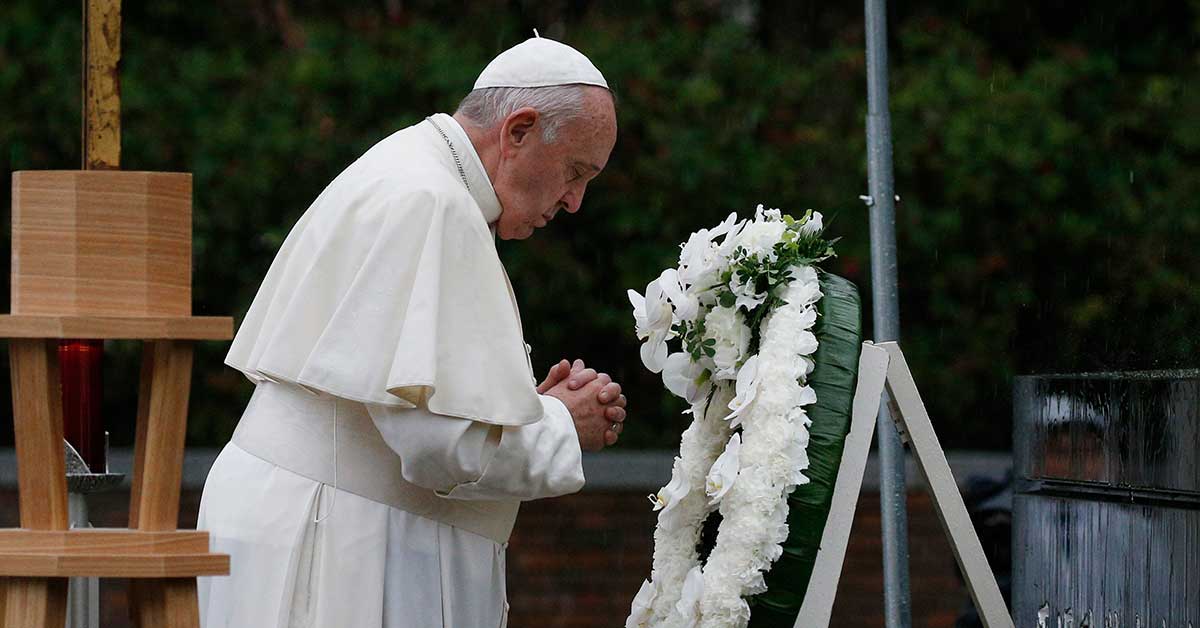 Pope Francis prays as he visits the Atomic Bomb Hypocenter Park in Nagasaki, Japan, on Nov. 24, 2019. Catholic bishops in Japan are calling for the prohibition of nuclear weapons as they announce a 10-day prayer programme marking the anniversary of the Hiroshima and Nagasaki bombings. (CNS photo/Paul Haring)

At any moment, the world could be within 30 minutes of history’s worst disaster – nuclear war!

As we remember the tragic anniversary of the U.S. atomic bombings of the Japanese cities of Hiroshima and Nagasaki on August 6 and August 9, 1945, it would do us well to seriously consider that nuclear weapons today threaten the entire world.

Before his death, Dr Bruce Blair, a former military officer responsible for 50 Minuteman nuclear missiles in Montana, and co-founder of Global Zero  –  an international organization dedicated to eliminating all nuclear weapons – shared with me a frightening little known fact: Both the United States and Russia each have hundreds of nuclear warheads still aimed at each other.

And what’s even worse, these weapons of mass destruction are programmed at launch-ready alert – otherwise known as hair-trigger alert – meaning they are fully armed and ready to be launched within just 30 minutes of a perceived nuclear attack.

The risk of misinterpreted information or system failure could lead to accidental nuclear war. The world has already experienced several close calls.

On Jan. 23, 2020 the Bulletin of the Atomic Scientists’ Science and Security Board, together with 13 Nobel Laureate consultants, dramatically moved their famous Doomsday Clock to 100 seconds before midnight – warning how extremely near humanity is to a global catastrophic midnight posed by the increasing threats of nuclear war and climate change.

On Jan. 27 the Bulletin of Atomic Scientists’ Science and Security Board issued their 2021 Doomsday Clock statement warning that it is still 100 seconds to midnight!

The 2021 Bulletin of Atomic Scientists statement points out that “In the past year, countries with nuclear weapons continued to spend vast sums on nuclear modernisation programs, even as they allowed proven risk-reduction achievements in arms control and diplomacy to wither or die.

“Nuclear weapons,” they continued, “and weapons-delivery platforms capable of carrying either nuclear or conventional warheads continued to proliferate, while destabilizing  ‘advances’ in the space and cyber realms, in hypersonic missiles, and in missile defences continued. Governments in the United States, Russia, and other countries appear to consider nuclear weapons more-and-more usable, increasing the risks of their actual use” (see: https://thebulletin.org/doomsday-clock/current-time/).

I strongly recommend that all adults and teenagers (not children) watch the still highly relevant 1983 movie “The Day After” which realistically portrays how an escalating set of events could quickly lead to a catastrophic nuclear conflict, and the horrific aftermath of a nuclear war (link to movie: https://bit.ly/3ijEy8v). And it would be very fruitful if the church, university and high school groups would view it together, followed by prayer, discussion and a commitment plan to work for an end to all nuclear weapons.

Possessing nuclear weapons – instruments of war that are designed to inflict unimaginable far-reaching devastation to millions of people and critically wound the earth – is sheer madness. In fact, that’s what it’s called: M.A.D., that is, Mutually Assured Destruction!

In his message given at Nagasaki’s Atomic Bomb Hypocenter Park, Pope Francis said, “One of the deepest longings of the human heart is for security, peace and stability. The possession of nuclear weapons and other weapons of mass destruction is not the answer to this desire; indeed they seem always to thwart it.”

And with prophetic warning, Pope Francis declared: “The use of atomic energy for purposes of war is immoral, just as the possessing of nuclear weapons is immoral, as I already said two years ago. We will be judged on this”.

So, will believers in the God of life and all creation prophetically oppose this madness, or will we continue to ignore it?