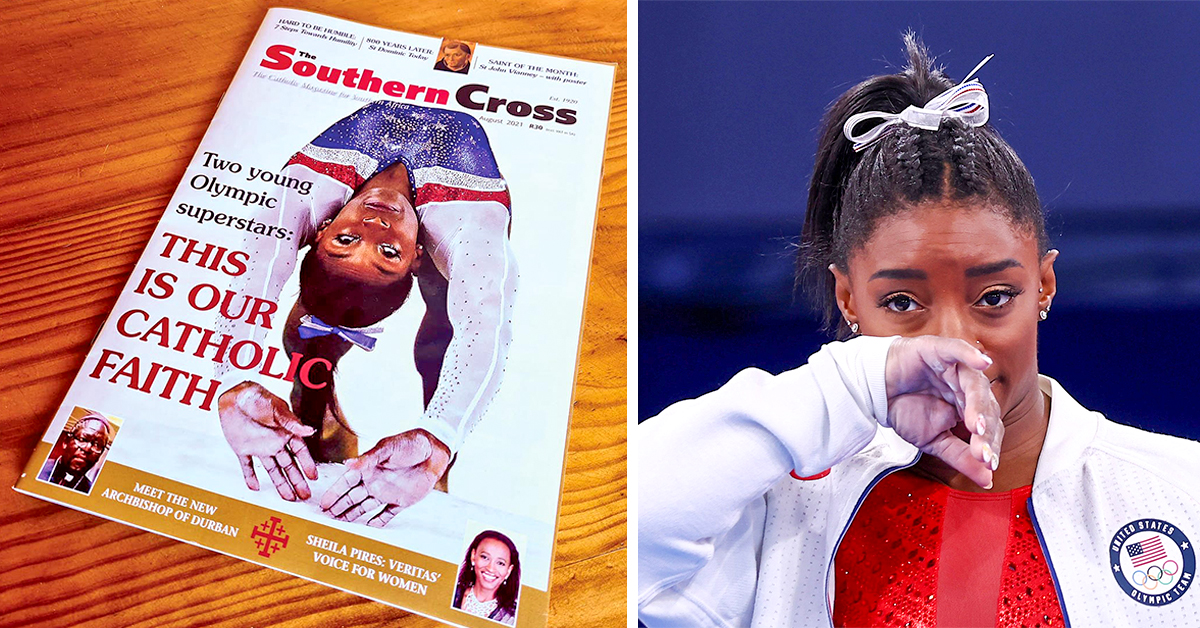 Photos: Cover of the August issue of The Southern Cross magazine. US gymnast Simone Biles is seen at the Ariake Gymnastics Centre in Tokyo during the Olympics. (CNS photo/Mike Blake, Reuters)

When we decided to place the gymnast Simone Biles on the cover of the August issue of The Southern Cross, we intended to highlight a young sporting champion who is open about her Catholic faith. Our article features Biles alongside another young legend in her sport, swimmer Katie Ledecky.

Our assumption was that both of these devoutly Catholic stars would add to their already prodigious Olympic medal collection. Ledecky did just that, winning two golds and two silvers. Biles, however, ended up with a solitary bronze in the only individual event she competed in. Before that, she had withdrawn from all competition, citing mental health issues.

In talking so openly about her mental health, Simone Biles accomplished something much greater than adding to her huge number of medals. By speaking about mental health, she has brought an imortant topic into the mainstream, and in doing so helped destigmatise mental health.

Like tennis star Naomi Osaka earlier this year, Biles has shown that even the world’s greatest athletes can have mental health problems which need to be acknowledged and addressed. Like Osaka, who withdrew from the 2021 French Open due to her mental state, Biles has highlighted that mental health covers a vast range of issues, not just those at the extreme end of the spectrum which feed the popular imagination.

Mental health disorders can take many forms, ranging from anxiety to eating disorders to clinical depression to schizophrenia. But the stigma associated with mental health issues prevents many from seeking help, by way of professional intervention or the support of family, friends, employers and so on.

Simone Biles received a backlash for withdrawing from the events she had qualified for, particularly from the team event, to the point that in her own country she was called a “traitor”.

In Britain, the media figure Piers Morgan mocked Biles for pulling out, suggesting that her reasoning served as an excuse for a poor performance. Morgan, who resides on the parasitical end of the media landscape, was rightly criticised for his insensitive and senseless comment.

An inevitable fact of Biles’ sport is that a momentary lapse in concentration while performing complex physical manoeuvres can lead to serious injury — a broken arm or, worse, a broken neck. That hazard doesn’t apply to runners or tennis players, who will just have a bad result should their mind not function at an optimum. Gymnasts, F1 racing drivers and their likes are under much greater pressure — not only to perform but to survive their competition intact.

One cannot help thinking that these attacks, almost exclusively from right-wing sources, were related to the fact that Biles is a strong, successful young black woman. As a black woman, she very likely anticipated this sort of reaction. And yet, she put her own well-being, physical and mental, above the pressures of her own ambitions and that from the public.

Where she might have lied and blame a foot injury for her withdrawal from contests, she spoke the truth — as she has done in the past about the pressure of her job, the weight of her own expectations, and about the sexual abuse she had suffered from a coach. Instead of hiding in her hotel room, she sat at the sidelines, cheering on her fellow gymnasts.

This 24-year-old exhibits an exceptional level of thoughtfulness, sincerity and humility. In an increasingly self-centred and mercenary world, these qualities require an immense courage — and when that is shown, it should inspire us all.

The Tokyo Olympics have created many sporting heroes, including our own Tatjana Schoenmaker. They merit our admiration. But the greatest champion of them all has won a solitary a bronze medal. With her courage, honesty and humility, Simone Biles has shown that she is much more than just a champion!

Get your August issue of The Southern Cross magazine – at your parish R30 or  Subscribe – There is a range of options – 3,6,12 months and print, digital or a combination subscription to both (for the same price!). Order latest editions or back-copies at R30 (plus R12 p&p) from admin@scross.co.za, or order online for your parish.