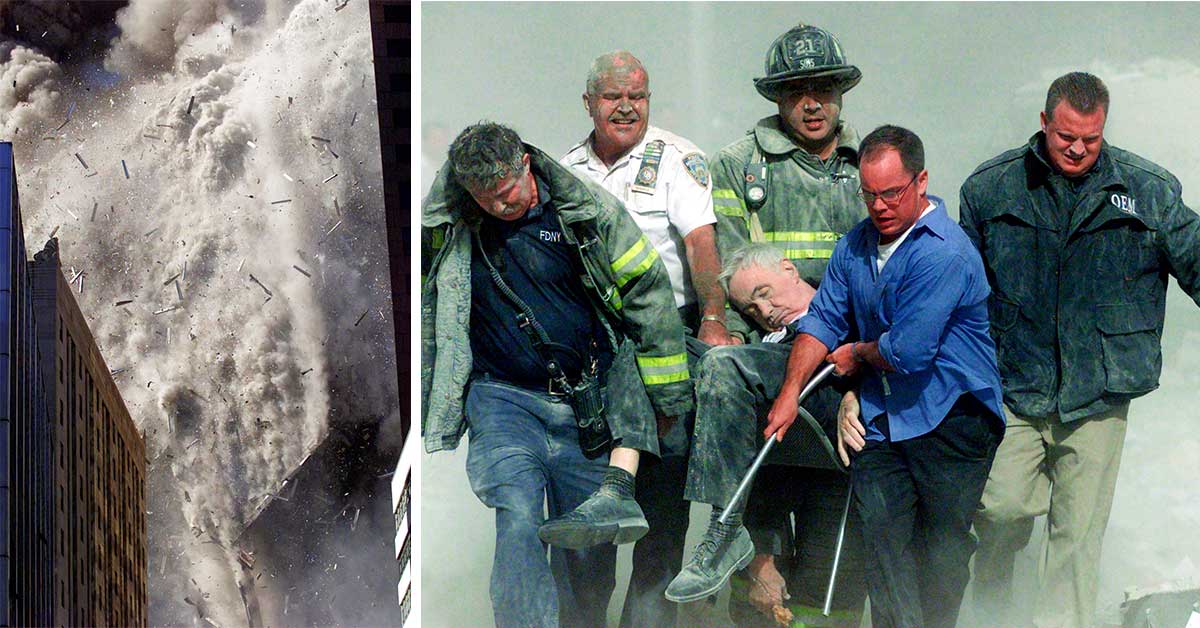 (Left) One of the World Trade Center towers in New York City collapses on Sept. 11, 2001. (CNS photo/Shannon Stapleton, Reuters). (Right) New York firefighters and rescue workers are seen carrying Franciscan Father Mychal Judge, a chaplain with the New York Fire Department, who died while giving last rites to a firefighter in the aftermath of the terrorist attacks that brought down the twin towers of the World Trade Center. (CNS photo/Shannon Stapleton, Reuters)

By Mark Pattison – The 20th-anniversary remembrances of the 9/11 terror attacks in the United States is renewing a canonisation push for the first identified casualty: Franciscan Father Mychal Judge.

Father Judge, a New York Fire Department chaplain, was at the World Trade Centre site praying with and ministering to attack victims when debris falling from the ruins of the twin towers struck and killed him.

Even then, some Catholics were saying Father Judge should be considered for canonisation.

Twenty years later, there has been only a bit of movement toward advancing the priest’s sainthood cause.

A representative of the Vatican Congregation for Saints’ Causes said Father Judge would be a good fit for sainthood as an “offerer” – based on Pope Francis’ 2017 motu proprio, “The Offerer of Life” – as “someone who offers his life for others,” according to Francis DeBernardo, executive director of New Ways Ministries.

DeBernardo said the group collected interviews with people who knew Father Judge, who died at age 68 after 40 years as a priest.

But sainthood is a lengthy and time-consuming process. And costly. The Archdiocese of New York, where Father Judge lived and ministered, has not sponsored his cause.

Franciscan Father Kevin Mullen, the current provincial of the Franciscans, said in an email following an inquiry from The Associated Press: “We are very proud of our brother’s legacy and we have shared his story with many people. We leave it to our brothers in the generations to come to inquire about sainthood.”

Father Judge’s own provincial, Franciscan Father John Felice, told The New York Times in 2002 – when calls for Father Judge’s canonisation had already begun – that such a status would define the priest too narrowly and would even be an injustice to him.

“A lot of what Mychal was about was admirable. I’m just a little leery of putting it into a context that shoves a person away from our human experience, and makes them less effective as models for everyday living,” he said.

“It’s better to keep the real Mychal alive and well in your brain. I think he has a lot more to say than a Mychal with a halo over his head,” Father Felice added.

Don’t look for New Ways Ministry to sponsor Father Judge’s cause, “and not for any canonical reasons,” DeBernardo said. “You need a whole organisational infrastructure. It’s not something that a group like ours could take on as a side project.”

Another worry is whether the passage of time will wither support for a sainthood cause.

“That’s going to be the challenge,” said DeBernardo, who has written a biography of the priest that awaits publication. “That was the challenge in 2017, to be able to get firsthand accounts of him. ”

He added: “From researching the book, it was very hot on people who were still alive,” and that number inevitably shrinks. “(Father) Judge was 68 (when he died). His classmates, if they’re alive, would be 88.”

DeBernardo said New Ways will issue a blog post to drum up support for Father Judge’s sainthood cause and see who responds. Beyond his chaplaincy to the Big Apple’s firefighters, Father Judge was also active in Alcoholics Anonymous and did AIDS counselling during his priestly ministry.

“I’m going to try to find other possibilities of groups that could really do the sponsoring,” he said.